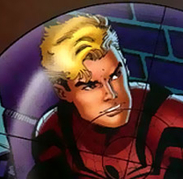 The Spider-Man clone was created by Professor Miles Warren, aka the Jackal, as an instrument of revenge against the real Spider-Man for the death of Gwen Stacy. Subjected to hypnosis and mind control drugs, the clone firmly believed himself to be the real Peter Parker.

The Jackal's plan was ready to begin. The unconscious clone and the drugged Spider-Man woke up in Shea Stadium and were shocked and none to happy to see each other. Jackal told them that only one of them could disarm the bomb near the kidnapped Ned Leeds because the device was set to explode if it was approached by the clone. As the Spider-Men battled it out, the Gwen Stacy clone forced the Jackal to free Ned Leeds but the bomb exploded, killing Warren and leveling Shea Stadium. The clone only had time to realize that there had been an explosion before he blacked out.

When he woke up, he was at the bottom of a smoke stack of an incineration plant (placed there by Spider-Man, who tried to dispose of what he thought was his dead clone). Still thinking he was the real deal, the clone headed to Peter's apartment to shower and eat before resuming his search for the Jackal (who he didn't learn until later had died). Reaching Peter's apartment, he saw Peter and Mary Jane Watson inside. He was about to smash through the window and scream to MJ to get away from Peter, until an "explosion" in his mind "opened a door in my mind--and I knew...with all my heart and soul, I knew!--that everything I believed about myself...was a lie."

He considered killing Peter and taking his life, but he was a clone, not a murderer. Instead, he bought a bus ticket to San Francisco. On the way, he met Clifford Gross, a divorced shoe salesman with kids who thought he was a joke. Clifford also wanted to get away from New York. A near accident on the road forced the bus passengers to get a hotel for the night. Feeling his spider sense go off later that night, the clone headed to Cliff's room just as he was about to commit suicide. Hating himself for still feeling Peter's compassion and decency, the clone saved Cliff's life. He realized that while he wasn't Peter Parker, he couldn't escape the values instilled into Peter by his Aunt May and Uncle Ben. When Cliff asked what his name was, he introduced himself as Ben Reilly. His uncle's first name. His aunt's maiden name.

Ben tried to settle down in San Fran, but simply trying to settle reminded him of Parker. Settling down is what Peter Parker would have done. So he moved on. Moved all around the world: San Francisco to Singapore to Bombay to Salt Lake City. He managed to get a job as a science professor in Salt Lake, planning to earn just enough to start a new round of traveling. But after stopping in at a local diner, he met a fell for a beautiful red headed waitress named Janine Godbe.

Meanwhile, Ben had been pursued for years by his "brother," Kaine. A failed clone of Peter Parker and suffering from a degenerative disease, Kaine hated his life and used his cloned spider powers to became a hired killer. Kaine had managed to fall in love with a Salt Lake City police detective named Louise Kennedy and finally began to feel that it was possible for him to experience happiness. As the clone degeneration progressed and became more agonizing, Kaine wanted to share his pain with someone and decided Ben Reilly would be that victim. Jealous that Ben would never feel the pain of the disease, he vowed to make sure that Ben's life would always be painful.

Ben, at the same time, had been enjoying using his spider-powers to vent his anger and frustration on mafia lord Vincent Tannen's gangs. It was during one of his beatings on the gang that Ben was taken by surprise by Kaine. Badly beaten, Ben was helpless when Tannen showed up with his police insider: Louise Kennedy. Enraged that the one person that made him feel hope was a dirty cop, Kaine promised himself that he would kill her.

He got his chance as Ben and Janine were riding out of Salt Lake City. They were pursued by Kennedy and her partner, who wanted to bring in Janine on murder charges. (Her name was really Elizabeth Tyne and she had been abused by her father for years, until she killed him out of self defense.) A battle between Kaine and Ben followed, but Kaine turned his attention to Louise, who he killed without a second thought. Satisfied yet ashamed of killing the woman he loved, Kaine ran off, just as Kennedy's partner arrived to see her dead at Ben's feet. Ben knocked him unconscious, but the fact that Kaine left finger prints all over Kennedy's body would come back to haunt Ben...and Peter Parker.

Kaine's finger prints were naturally a match of Peter Parker's and he was stunned when he was arrested for killing a Salt Lake City police detective. This was just after he had buried Aunt May and he was in a fragile mental state. Ben Reilly had also recently re-appeared in New York City, an unwelcome return to a part of Peter's life that he had tried to forget for over five years. Ben came back to New York when he learned that Aunt May was dying, a fact that he learned by pretending to call the wrong number, an excuse to hear his beloved aunt's voice.

The Second Clone Saga was a convoluted mess, so its easier to say that Peter and Ben managed to escape being found guilty of murdering Louise Kennedy, just in time for the Jackal to return. You see, the "Miles Warren" that died at Shea Stadium had been a clone. The REAL Professor Warren had been in suspended animation for five years, undergoing genetic enhancements to become faster, stronger and more agile.

Ben put together a makeshift costume while helping Peter take down the Jackal, and was dubbed the Scarlet Spider by the Daily Bugle. Just before the Jackal's defeat, Ben and Peter were examined by Dr Seward Trainer, Ben's old friend. He found that Peter was the clone and that Ben was the real Spider-Man. Ben remained the Scarlet Spider for some time, until after Peter and Mary Jane left New York for Portland, Oregon. Because the Scarlet Spider was being such a nuisance to the new Doctor Octopus (Carolyn Trainer, daughter of Seward Trainer), she created a Cyber Scarlet Spider to ruin his reputation. So, Ben assumed the one identity she could never tarnish--Spider-Man!

Ben was exactly what the people at Marvel wanted: an unmarried Peter Parker. (Elizabeth Tyne got killed by Kaine.) During his time as Spider-Man, he worked at the Daily Grind coffee house and was bonded to the Carnage symbiote. Ben tried solving the mystery involving Gaunt, the Multivex corporation and the Jason Macendale Hobgoblin. Spider-Ben defeated Armada and Mysterio when they tried to control the airwaves in Media Blizzard. Ben fought and then befriended David Kalen. He had run ins with:

He also dated Jessica Carradine, the daughter of the burglar that killed Ben Parker.

Later in the Clone Saga, a skeleton wearing a shredded Spider-Man costume was found in a demolished smoke stack, the same smoke stack that Peter thought he had disposed of Ben years before. This raised more questions for the Spider-Men and Ben took the skeleton from the police morgue to have it examined by the Avengers. The theft was witnessed by J. J. Jameson, who offered a $100,000 reward to anyone that could bring the body back. Mercenaries came out of the wood work to collect on the money, including Hammerhead Boomerang, Beetle, Jack O'Lantern (Steven Levins), Shocker and Scorpia. The mystery of the skeleton was ended when a facial reconstruction was done and the clone's face was shown to be Peter Parker's. Parker was in attendance at the unveiling and since he was clearly alive, no one believed that the reconstruction was accurate.

Everything was "great", until Norman Osborn, the original Green Goblin, returned from the grave and tried to kill Peter and the Daily Bugle staff. To save Peter, Ben jumped in front of the Goblin's glider, impaling himself. Norman had been claiming during the battle that he had been manipulating both the Jackal and Dr Seward Trainer to make Peter and Ben think that Ben was the original. Neither of them believed him, until Ben fell apart into dust after being killed by the Goblin. Apparently, that's what clones do after they die. Meanwhile, Alison Mongrain kidnapped Peter and Mary Jane's infant daughter. The whole Clone Saga ended in one fell swoop.

Peter never talked much about Ben after he died. (The reader backlash against the Clone Saga made Marvel wary of even mentioning the "c word" for years after the fact.) However, Peter did briefly use the alias "Ben Reilly" during the Superhuman Registration Act. He worked at Midtown High as a part time science teacher and had unmasked on TV as part of the S.R.A. This made him a target of various super-criminals, such as Daniel Berkhart and Francis Klum. After the afore mentioned bad guys attacked the school, Peter wore a hologram disguise that gave him blond hair with goatee and glasses. It was then that he used the Reilly alias.

We all believed that Ben Reilly and anything remotely related to the Clone Saga would never be mentioned in a Spider-Man comic ever again. Imagine fandom's surprise (or Peter Parker's) when Damon Ryder, aka Raptor, came looking for Ben Reilly in New York. Ryder had taken in Reilly as the clone wandered America, and Ben became Damon's lab assistant. Damon was a bio-engineer, specializing in dinosaur DNA. (This guy has got to meet Vincent Stegron some day.) Ben warned Damon against moving ahead too quickly with his experiments, but since when do comic book scientists listen to reason?