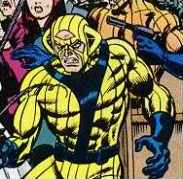 Mirage, or rather, his alter-ego Desmond Charne always wanted to be a super-villain. To this end, he studied electronics, specifically optics and laser technology - in order to create the suit he would use for his crimes.

His ultimate aim was to develop a mechanism of commiting crimes which would allow him to challenge and defeat Spider-Man - an event which occured all to quickly. His first battle, and his first defeat, was at the hands of his ideal opponent.

Desmond started his career by embarking on a series of bold daylight robberies. His targets were weddings, and society events. In one such raid, he targeted the six weddings which were being held in New York's "Morgan's of Malverne" hotel. One of those weddings was that of Daily Bugle secretary Betty Brant to Investigative Reporter Ned Leeds. One of the guests was, of course, the photographer Peter Parker, and the the story unfolded as per Amazing Spider-Man #156.

Mirage and his men were defeated and captured by the police. He subsequently fought The Thing, and was again defeated and captured. Finally, his ignomious career came to an end when he was one of the many villains who were killed by "The Scourge", as detailed in Captain America 319.

There is one coda to the story. Captain America borrowed Mirage's costume, in a successful attempt to make The Scourge believe that one of his victims had escaped. This trick enabled Cap to meet, and eventually defeat Scourge.

Of course, the Mirage name was subsequently adopted by the lovely Danielle Moonstar, of the New Mutants - but that's another profile altogether.

Years later, he was cloned by the Jackal (Ben Reilly), who was using Spider-Man’s guilt over past deaths to control him. Reilly promised that the criminals had taken therapy from Ashley Kafka and were no longer a danger. Reilly also said he could clone Uncle Ben, which Peter refused. Jackal then told the criminal clones to kill him.