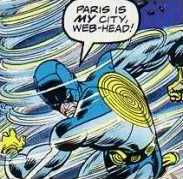 Formerly an Engineer for NATO, Cyclone had a falling out with his former employees, supposedly related to political decisions over implementing his research, based on the development of a wind-generating weapon.

Cyclone took his invention, and used it for his own criminal ends, developing his Cyclone costume and other weapons.

Like many criminal masterminds in Spider-Man comics, he decided to form a gang and capture Robbie Robertson and J. Jonah Jameson. (Jameson was in Paris to escape accusations from Daniel Berkhart that he had worked with the criminal. Robertson was in Paris to deliver the ransom money for JJJ's safe return.) Like so many criminal masterminds who follow this plan, he was defeated by Spider-Man.

The Cyclone should not be confused with Cyclone II (Pierre Fresson) from Thunderbolts.