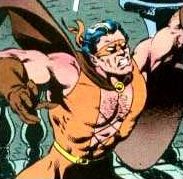 Dominic Tyrone was a New York racketeer: the partner and best friend of Silvermane. The two hoods worked together to defeat rival gangs on the East Coast and made connections with the criminal group known as the Maggia. Once they made it to the top, Silvermane double-crossed Tyrone. As Dominic was walking the New York streets, a hired thug came out of an alley and damaged his spinal column with a blackjack blow at the base of his skull. Tyrone was taken to a lake outside of the city and dumped in to die. The disposal was observed by a young girl named Clarissa who dove into the water, pulled Tyrone to shore and dragged him to her house and presented him to her father. They arranged for Dominic to be taken to the hospital where an operation was performed on his spinal column to try to prevent paralysis. The doctor's prognosis was bleak but Tyrone used his anger and desire for revenge to conquer paralysis. He then pushed himself beyond that point, honing his body to near-perfection and developing fencing skills that made him the superior of any sword master. Through it all, Clarissa stayed by his side. When Clarissa's father died, Dominic decided it was time to begin his plan of revenge.

He decides to use his sword fighting expertise and pretend to be a crime fighter with a truly goofy costume. He calls himself Rapier and dedicates himself to putting the hurt on various Maggia operations. During this time, he crosses paths with Spider-Man. He also gains the attention of Silvermane, according to plan. Agreeing to a meeting with his old partner at the Cloisters, Rapier dispatches Silvermane's goons, reveals his true identity, and shocks Silvermane with the stun attachment of his sword. Before he can run Silvermane through, Spider-man arrives and prevents the execution. Rapier and Spidey end up in a sword fight. The web-slinger is clonked on the head by Clarissa who has secretly followed her lover. Rapier is so annoyed at Clarissa's interference that he dumps her on the spot. As he leaves the scene, Silvermane shoots him in the back. Rapier is still tough enough to stagger away.

Sometime later, Rapier makes the mistake of agreeing to attend a meeting of villains at the bar with no name. There, he and seventeen others are gunned down by the Scourge of the Underworld who is disguised as the bartender. Rapier is not tough enough to stagger away this time.