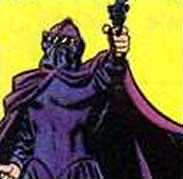 The origin of the Masked Marauder has never been revealed. He first appeared as an already successful crime leader with men, money, and resources at his command. Although he is clearly an engineering genius, capable of creating levitation/teleportation rays, androids, exoskeleton armor, and blinding opti-blasts, his real identity was eventually revealed to be Frank Farnum, the manager of the Manhattan building in which the law offices of Nelson and Murdock reside. Where did his expertise come from? Where did he get his money to begin his organization? What were his reasons for leading a life of crime? None of these questions has ever been answered.

The Masked Marauder first comes to the public's attention battling Spider-Man, prior to his big attack on the World Motors Building. He draws Daredevil into the picture and arranges for the two super-heroes to fight each other while he and his henchmen steal the XB-390, a new auto engine. This plot is eventually foiled by Spider-Man and Daredevil. Although all of his men are captured, the Marauder himself manages to escape.

Taking on new men, culled from the New York City underworld, the Marauder arranges to have the Gladiator sprung from prison. He intends to use his new man as glorified muscle but the Gladiator proves very hard to tame. In the end, the Marauder is forced to take him on as his partner. The two villains decide to try to take over the Maggia. They present their credentials and promise to defeat Daredevil. The Marauder creates his Tri-Man, an android animated with the strength of the Mangler (a wrestler), the moves of the Dancer (a safecracker) and the genius of the Brain (an underworld figure), for the purpose of defeating Daredevil. The plan fails when Daredevil defeats the Tri-Man instead. The Maggia agree to take in the Gladiator but they spurn the Masked Marauder.

The Marauder's next plan is to team up with Stilt-Man to try to sniff out Daredevil's secret identity. He ends up in a special helicopter with Matt Murdock (who is actually Daredevil), Matt's law partner Foggy Nelson, and their secretary Karen Page. The helicopter has a force field that disintegrates anything that comes in contact with it. Unfortunately for the Marauder, what comes in contact with it is his body.

The Marauder is presumed dead until he re-appears in Detroit some years later. (He reveals that his force field disintegrator was actually a teleportation device that allowed him to escape and start over again elsewhere.) With his henchmen Steele and Hacker, he steals Tony Stark's experimental space shuttle and runs afoul of Iron Man, who defeats him.

Later, the Marauder again encounters Iron Man along with Jack Russell, the Werewolf By Night. His plans (with his new henchmen Pardee, Creach, and Strenk) involve creating a Tri-Animan (an android powered by three animals instead of men) to aid in his revenge again the Maggia. He fails.

When the Marauder next appears, he has somehow become Big M, the leader of the Maggia. In battle with Spider-Man and Daredevil, he "permanently" blinds the web-slinger and threatens New York with his "bombdroid", a Tri-Man carrying a nuclear device. As a blinded Spider-Man succeeds in defusing the bomb, Daredevil defeats the Marauder in the same way he did in their first meeting... by resisting the effects of the opti-blast because he is already blind.

The Marauder is presumably still in prison after this latest unsuccessful exploit.