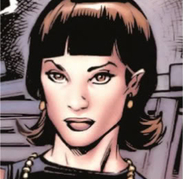 Betty first appeared in Amazing Spider-Man #4, working for the Daily Bugle as J. Jonah Jameson's secretary. She had many run ins with Spider-Man: such as being kidnapped by the first incarnation of the Sinister Six, seeing her brother (Bennett Brant) killed in a battle between Spider-Man, Blackie Gaxton and Dr Octopus and being at the Spider- Man Fan Club, which was crashed by the Human Torch and the Green Goblin.

Although attracted to Peter, she thought he was too much of a thrill seeker. Despite being quiet and shy, Peter always seemed to be around to take pictures of Spider-Man in action, a fact that made her worry about his safety. Being the anxious type, Betty couldn't handle constantly worrying about Peter and she began dating reporter Ned Leeds, whom she married in Amazing Spider-Man #156. Their marriage got off to a rocky start when the building they were getting married in was being robbed by Mirage. Things didn't get much better as the marriage went on. Betty almost left Ned in Amazing Spider-Man #195, and did leave him after starting an affair with Flash Thompson around Amazing Spider-Man #270. (Ned spent much of his time off on assignments for the Bugle, even on their honeymoon. This caused resentment in Betty.) Flash was seeing Sha Shan at the time, and the affair ended his relationship with her.

Flash was believed at one point to be the Rose's enforcer, the Hobgoblin (Roderick Kingsley), who had framed Flash after he called Hobgoblin a coward and a creep on television. During this period, Flash escaped from prison and hid out at Betty's apartment. After tracking Flash down, the real Hobgoblin sent Ned Leeds to beat Flash senseless and pulled off his own mask right as Betty walked in. Seeing the Hobgoblin's face (Ned's, whom Kingsley had been using as a patsy), Betty screamed and fainted (Amazing Spider-Man #288). Shortly thereafter, her estranged husband was murdered (Spider-Man vs. Wolverine #1 and Amazing Spider-Man #289 see also Hobgoblin Revealed), an event that almost sent Betty off the deep end with grief and guilt.

Trying to find meaning in her life, Betty joined the Cult of Love, leaving her job and Flash to live in the cult's commune. The Teacher had told her to give him all of her money and property, as they were corrupting influences. After an initial attempt by Spider-Man to retrieve her failed, Flash kidnapped her and had her deprogrammed. In Web of Spider-Man #63 Betty defeated Mister Fear, and confronted the fear of loneliness that led to her dependence on men. She faced down her husband's specter in Spectacular Spider-Man #148. In Web of Spider-man #91, the woman who once rejected Peter Parker because he was too much of a thrill seeker became an investigative reporter, tracking down the Foreigner, the man she believed murdered her husband, and battled the Foreigner's high-powered assassins to a standstill. She also took on FACADE. Her transformation amazed Spider-Man himself : "Since when did Betty carry a gun and know martial arts?!"

Flash and Betty broke up and there was a chill between them for quite a while. That changed after Flash became depressed and developed a drinking problem. Betty came to cheer him up, but quickly discovered "You're the same testosterone crazed jerk you always were!" She tried to walk away from him, but got drawn back after he begged her in a drunken stupor. He asked Betty to help him and despite her concerns about the difficulty of helping an alcoholic, Betty agreed to help him.

Flash soon had a drunk driving accident and Betty began avoiding him, feeling that she wasn't ready to play Florence Nightingale yet again. She had done that with her mother, her brother and her husband and each had ended up dead. Flash reassured her he was going to go to a treatment program and she hugged him, telling him that she loved him. Flash's life seemed to turn around after he got a job as Norman Osborn's assistant at the Daily Bugle, but Betty's life wasn't getting any easier. She managed to survive an assassination attempt against Osborn that nearly killed her, Peter, Norman and Normie Osborn. (Peter Parker: Spider-Man #95)

Kingsley reappeared as the Hobgoblin after Jason Macendale announced to the world that Ned Leeds had been the original Hobgoblin. Betty demanded to be involved in the Bugle's investigation of Macendale's claims. She worked with Spider-Man, who wanted to help her clear Ned's name.

Betty formed a plan to flush out the Hobgoblin, going on TV to say that she had found Ned's notes regarding his investigations of corporate crime, saying she believed it was linked to her husband's death. The lie worked and Hobgoblin kidnapped Betty at her apartment. He took her to his hideout and promptly destroyed the spider-tracers that Spidey had given Betty in case of trouble. Except, he didn't know about the tracer in Betty's voice recorder, which she used as Hobgoblin related the story of how he used Ned Leeds, Flash Thompson and Jason Macendale in his schemes. Her plan worked, and Spider-Man arrived just as Hobby was about to kill her. A battle ensued, and Roderick Kingsley was finally unmasked as the Hobgoblin.

Kingsley didn't stay in prison for long, as he managed to trick Norman Osborn into breaking him out of jail. Finding Kingsley and putting him back in jail became Betty's obsession, to the point of ignoring Flash. Hobgoblin escaped to the Caribbean and Betty and Flash broke up.

While Hobgoblin has been out of her life, Betty has had more than enough experience with other super-criminals. After the Superhuman Registration Act forced Peter Parker to reveal that he was also Spider-Man, many of Peter's friends felt betrayed and angry at him for so many years of lies and deceptions. One of which was Deborah Whitman, who wrote a tell all book about how Peter betrayed and humiliated her when all she wanted was to be his girlfriend. The Vulture crashed her book signing to draw out Spider-Man, but not before Betty came to ask Deb why she was trashing Peter. In Betty's mind, Peter's revelation made her world make sense. Spider-Man had always seemed like some THING that followed her where ever she went. He was at the scene of her brother's death, rescued her from the Sinister Six and helped her with the Hobgoblin. She just never knew why. After Peter stopped lying, she understood that Spider-Man was her friend and that Peter was acting out of love, compassion and decency.

Betty has been a rock of support for Peter in the aftermath of the Registration Act. After Aunt May was shot by a sniper, Betty came to console Peter. She also began to see Flash Thompson again, after running into him at Deb Whitman's book signing. She was so glad to see that he was out of his coma, she instantly kissed him, which drew the ire of Miss Arrow. Arrow had her own plans for Thompson, and framed Betty for having narcotics. While having dinner with Flash, Betty stopped to use the bathroom and was attacked by thousands of spiders. The restaurant owner saw no spiders, but found a small amount of cocaine and a razor. Flash and Betty left the restaurant, but on their way home, Betty saw Arrow grin at them from the sidewalk and turn into spiders. Betty has since been helping Peter discover Miss Arrow's motives and plans for Flash Thompson.

After Betty saved Flash from Ero, she joined Robbie Robertson as a writer for Front Line. This was a new newspaper that former Bugle journalists created after Dexter Bennet took over the Daily Bugle. Betty investigated many stories for Front Line, including the F.E.A.S.T. foundation, run by the mysterious Martin Li. She also resumed a relationship with Flash. He had lost his legs in a military conflict in the Middle East and re-gained his ability to walk with the help of the Venom symbiote. His new life as a military secret agent (codenamed Agent Venom) made him start lying to Betty about where he had been. After living with Ned Leeds's lies while he was the Hobgoblin, Betty knew a lie when she heard it. She broke up with him, thinking he had started drinking again.

After Thompson defeated the terrorist known as Jack O'Lantern VI (a new individual), the terrorist's masters (the new Crime Master) demanded that Jack eliminate Agent Venom. Betty was kidnapped to draw Flash out and Flash went to save her. He was interrupted by Spider-Man and the symbiote reacted badly to seeing its former host. The government agents tried to activate the kill switch, which didn't work as the creature had managed to remove it. Spider-Man saved Betty before Venom even got to the warehouse where she was being held. She and Flash patched things up when he returned to her apartment. Soon, Flash was on another mission and Betty was mugged and badly beaten after seeing a movie. Aunt May forced Peter to come see her in the hospital, calling him while he was searching for her mugger as Spider-Man. It took the shock of May telling Peter that she hadn't been this disappointed in him since he left her alone after Uncle Ben had been shot. Peter came to the hospital and had his "Friday night movie date" with Betty in her room.

Betty was later attacked by the Crime Master's thugs (Jack O'Lantern, Toxin and Megatak) after Flash tried to assassinate Crime Master. Agent Venom managed to defeat Toxin by using a sonic spray that Peter had given Betty in case Venom came after her. After she had escaped from the violence, Venom revealed himself to be Flash. She gave him an angry slap but went with him to stay safe from the pursuing killers. She didnt stay safe for long, as she was taken by Toxin as Flash was busy saving his sister from Jack O'Lantern. Betty found herself at Crime Master's hideout and the gangster unmasked himself to her. He revealed himself to be her long dead brother, Bennett. Bennett claimed that he had never actually died all those years ago but had been groomed to be this generation's Crime Master. Betty then shot her brother as he fought Agent Venom, killing him. She then told Flash that while her brother died years ago and she appreciated his helping her escape, she never wanted to see him again.