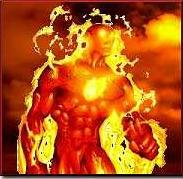 Johnny Storm, as stated above, is what you might call "hot tempered." He has plenty of background to justify that temperament. His mother died in a car accident while Johnny was a child and his father fell into alcoholism. Franklin Storm, his father, was eventually killed by thugs. The young man was raised primarily by his older sister, Sue Storm. They were close in age, but miles apart in personality. While Johnny was impulsive, Sue was careful and compassionate.

They were normal human beings, until they joined Sue's boyfriend, Reed Richards and his friend, Ben Grimm, on a test flight into outer space. While in space, the craft was hit by cosmic radiation. After they returned to earth, each of the flight members found that they had new abilities. Johnny's gift was the ability to fly, burst into flame and control fires that were burning around him. The four astronauts called themselves the Fantastic Four.

They became world known adventurers and tried to use their abilities to help mankind. They became the enemies of many people, most notably Victor von Doom, aka Doctor Doom. Doom had been the college room mate of Reed Richards, and he blamed Reed for the failure of a device he had created while at college. He made it his life's work that the world would know that he was superior to Richards.

The Torch and Spider-Man have a long history together. They have squabbled and bickered as often as they have helped each other. They are about the same age but have very different personalities. They stopped fighting each other long enough to apprehend the Beetle early in their careers, and Johnny accidentally inspired Peter to never give up after he was beaten by Doctor Octopus. Spidey returned the favor by rescuing Johnny from the Sandman after he was kidnapped. They survived fighting each other, after they were tricked into doing so by Mysterio and the Wizard. The Torch has aided Spider-Man several times against Venom, as fire is one of the creature's few weaknesses.

Spidey and Torch are what you might call super hero siblings. They like each other, but would never admit it. After Norman Osborn framed Spider-Man for attacking him and put out a reward for his capture, New York was flooded with vigilantes trying to take him down. (Absorbing Man, Titania, Black Tarantula and Punisher among them.) Torch was one of the few to speak up for Spider-Man, warning the Hornet to leave Spidey alone. Little did he know that Peter had been using the Hornet identity to fight crime without becoming a target in the process.

Torch and Spidey (very) briefly teamed against the Vulture. Toomes arrived at the Empire State Building with an Uzi, after telling Spider-Man that they would finally settle their feud once and for all, mano a mano. Spidey said that he had lied too, just as Torch arrived and destroyed Vulture's wings. Spidey punched him and the old man crashed into a snow bank.

At a later date, Johnny was killed while in battle with insect-like creatures from the Negative Zone. Little did the Four know, but John was revived by the insects at the command of Annihilus. Annihilus wanted to use Torch to open a portal to Earth and although John refused, a portal was opened anyway by Reed Richards. Johnny led a rebellion of other prisoners against Annihilus and defeated him. Reed later determined that, from John's perspective, he had been gone for two years. During the time that Johnny was presumed dead, the Fantastic Four renamed themselves the Future Foundation and took on Spider-Man as their fourth member, as per Johnny's last will and testament. Johnny later said that he added that part as a joke.

Soon after his return, Johny and Spider-Man traveled to a space station orbiting the earth that was carrying the astronaut John Jameson. Contact with the station had been lost and upon entering the ship, Johnny and Spidey were attacked by Dr. Octopus's mini octobots. They were rescued by Jameson, who had been on a space walk when the octobots took over the station. However, the three were soon confronted by the other astronauts, who had become possessed by the octobots. The escape shuttle was destroyed by Mysterio at the control station, stranding the three. Mysterio and Octopus then remote piloted the Apogee to burn up in the earth's atmosphere. Torch saved them by absorbing the heat, while Spidey and John removed the oxygen from the station, causing the astronauts to black out. They were kept from suffocating by being taken to oxygen ready space suits.

John was less than happy with Peter after he announced on TV that his new business, Parker Industries, was moving into the Torch's old home, the Baxter Building. A furious Torch came for Peter at the building but was immediately trapped in the same tube that Spidey had been trapped in when he first met the Fantastic Four. Torch melted his way out of it and went after a very amused Spider-Man. Torch resented that Peter bought the building after everything the Four had done for him but agreed to talk it out..after their fight had caused about $100,000 in damages. Spidey gave Johnny a tour (John reminded him that he had lived there forever) and introduced him to the man in the head office, Harry Osborn.

Johnny was stunned that the Green Goblin's son was in charge of running things, from the Baxter Building no less. Harry said that he was Peter's best friend and was good at business, but Johnny was hurt that Harry was Peter's bff. Spidey showed him the garage where he built new Spider themed vehicles but John was again hurt that he had built a new spider mobile without him. He flamed on again and knocked Spidey through a wall. They were stopped by the reformed criminal, Clash, whom Peter scolded after he changed out of his costume. Peter showed Torch one last thing: the statue of the Fantastic Four that was in the lobby. Several less than ethical corporations (Alchemax, Roxxon, and Hammer) had tried to buy the building but Parker Industries made sure to outbid them all. He wanted to make sure that the building stayed in good hands until the Fantastic Four returned. Later, Peter, Johnny and Harry all went out for a drink. Peter got a call from Mockingbird about the cult called Zodiac had attacked SHIELD and stolen P.I. data. Torch agreed to help Spider-Man out. (Amazing Spider-Man #3 vol 4)