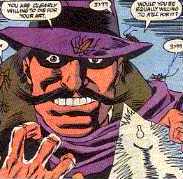 Although certain events have been called into question, the Painter himself described his origins as follows: He started out wanting to be a great artist, but lacked the talent. He began copying famous paintings and selling them, but his lack of attention to detail gave him away and he was sent to prison for three years.

Upon his release, he attempted a career in counterfeiting, but his lack of attention to detail gave him away again, and he was discovered by the second Human Torch and sent to prison again. He tunneled through a loose section of flooring and came upon an underground cavern. On the wall was a painting showing space travelers who painted their own paths and adventures. When he was trapped by a cave-in, he painted a picture of himself passing through solid rock, and he then did so to escape.

He allied himself with a gang of criminals to gain vengeance on the Human Torch. Why he did this was uncertain, unless he just wanted witnesses to his successes. He toyed with the Human Torch, easily defeating him with giant fire hydrants, tidal waves of sand, etc. However, his lack of attention to detail in his creations gave him away as von Vile, and the Torch managed to locate his headquarters and overhear his plans. He then painted a duplicate of himself to fall victim to the Painter's plans and then ambushed the Painter and destroyed his palate and brush, leaving him powerless. He was again sent to prison.

The Painter reappeared years later, covered with bugs with whom he communicated, and possessed of an artisitc motivation. He met with and merged his soul with the mutant known as Bora and the performance artist known as Spark. He empowered Spark and sent him to battle Spider-Man, who defeated him. Next he had Bora use her powers, which he amplified, to create a magical blizzard over Manhattan. He had Bora and Spark attack the Human Torch and Spider-Man, and used his brush to rejuvenate them immediately after they were defeated. However, apparently growing bored with the senseless battle, he transformed Bora and Spark into two-dimensional lifeless images on his canvas. He then said, "To Quote the Macabre King: 'When all else fails, go for the gross out.' ", and exploded into a shower of bugs, as outlined in the Art Attack storyline. The remnants of his skin were found to be made of canvas. His true origins and fate remain uncertain.

Was he powered by science or magic? Was he even human? How much of his origin is true? Couldn't tell you. The painter is part of the as yet untold saga of the "Cockroach Conspiracy."

Painter was very briefly released from prison by the Hypno-Hustler to fight Spider-Man, making him appear to be the Green Goblin. He was quickly defeated.