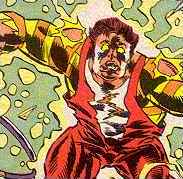 The man known only as Spark was initially a performance artist, although he was uniformly panned by critics and audience alike. The enigmatic man known as the Painter recruited him, along with the mutant known as Bora. The Painter performed a mystic ritual, which joined their three spirits, granting him inspiration, and granting the other two amplification of their powers. Spark may have fallen in love with Bora.

Spark first used his powers in an effort to enhance his performance, even adding Bora to the stage, but continued to be panned. When the Painter first transformed him into his more powerful form, he quickly ran out and attacked his former audience. The Painter teleported him back before Spider-Man could overpower him.

Spark, along with Bora, encountered Spider-Man on a few other occasions before being tracked by Spider-Man and his ally, the Human Torch, back to their lair. Spark and Bora were again defeated, but were revived by the Painter. However, when the fighting began again, the Painter grew bored with this venture, and trapped Bora and Spark as fixed images on his canvas, as outlined in the Art Attack storyline.