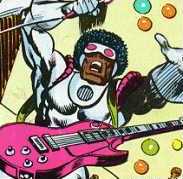 One night Peter, Harry Osborn, Mary Jane Watson, Sha Shan and Liz Allan went to a nightclub called the Beyond Forever. The main act was by a band called the Mercy Killers, and the leader was Antoine Desloin, the Hypno-Hustler. Desloin found that he could hypnotize people with his music, starting with the club's manager when he caught Antoine breaking into the companies safe. With the Mercy Killers playing back up, they could hypnotize the entire audience and rob them. Peter managed to resist the hypnotism long enough to get into costume and block out the sound with webbing. Spidey found out that Desloin's headphones blocked out the hypnotism and once they were removed, he fell victim to his own music. (Peter Parker, The Spectacular Spider-Man #24)

While in prison, Desloin attended a motivational speech by Jackson Weele, aka the Big Wheel. He fooled Weele into thinking he had been inspired by the speech and was soon free hypnotizing people again. (Spider-Man Unlimited (vol. 3) #12)

Hypno-Hustler has worked as a small time thug since that time, such as acting as a bodyguard for Tombstone while he was getting a heart bypass in prison. (Spider-Man's Tangled Web #16)

”Origin of the Species”

After the child of Harry Osborn and Lily Hollister was kidnapped in a scheme led by Doctor Octopus, Spider-Man tore apart the criminal underground looking for the baby. He was ruthless in pursuing any costumed thug that possibly may have the child or knowledge about it. Desloin, in a panic, ran to the police station in Chelsea to get protection. As soon as Hypno-Hustler arrived, Spidey tossed a webbed up trio of the Spot, Diablo and Overdrive into the station behind him. (Amazing Spider-Man #645)

Some time later, Antoine hired the mercenary Deadpool to invade Spider-Man's mind. Hypno-Hustler was in prison at the time and gave Wilson hypnotic technology to force Spidey to fight his way through prison and set him free. (Avenging Spider-Man #12)

He planned to ruin Spider-Man's reputation by using the prison cameras to record his beating up guards to set Desloin free. He was aided in this by his cell mate, Phineas Mason, the Tinkerer. Mason's improvements to the hypnotic music tech made it easier to control Spider-Man and Deadpool's minds. As Spidey tried to escape, he was attacked by freed prisoners, like Boomerang and the Painter. (To Spider-Man's influenced mind, they seemed to be Morlun, the Green Goblin, Kraven the Hunter, Vulture, Kingpin, Venom, J. J. Jameson, Sandman, the Lizard, Tombstone, Doctor Doom and Doctor Octopus. Deadpool was released from his mind control when Spider-Man used to code word "Ryan Reynolds" and they traded costumes to fool Antoine into thinking Spider-Man was dead. After he took off his hypno glasses to see for himself, Deadpool clobbered him. (Avenging Spider-Man #13)