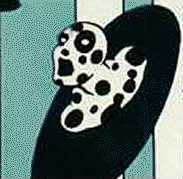 Dr. Jonathan Ohnn was a scientist working for Wilson Fisk, the Kingpin, during an unusually intense series of attacks; crimelords Micah Synn and Silvermane, as well as heroes Spider-Man and the Black Cat, encountered the Kingpin during this time. One of the toughest blows in this period came when Fisk's henchman, The Answer, disappeared after restoring the light-heroine Dagger. The Kingpin expected his scientists to create a new henchman, and the earliest lead came when devices in the Fisk Building successfully analyzed the radiation frequency of Dagger's partner, Cloak.

Ohnn made it his job to duplicate the frequency, and, working late one night, he succeeded, creating a portal into Cloak's Dimension of Darkness. However, the drain on the city's power was so great that, before New York City could black out, the portal shimmered. Desperate to see where the portal led before it could disappear entirely, Ohnn stepped inside. He passed out from the shock, waking up in a dimension of half-darkness, half-light; the portal to this new dimension was created when the power shortage affected the radiation wavelength. Ohnn found the correct portal home in a realm of portals; the dark half of this dimension appeared as floating black spots.

When Ohnn stepped back into his lab, he was covered in the spots from that other dimension, and though he didn't realize it at the time, the rest of his body was pure white. When Ohnn tried to brush the spots off his body, his hand sank into one. After the initial shock, Ohnn realized the spots were portable space warps, and this discovery started him thinking that he might be capable of defeating anyone in battle. He decided to test his powers against an enemy, and Spider-Man and the Black Cat were the first to arrive at the Fisk Building. (Spectacular Spider-Man #98)

The two heroes arrived on top of the building, disabling the security devices. After they finished, the Black Cat tried to enter the building, only to run into a space warp and land several blocks away. After she vanished, Ohnn stepped through another space warp, and announced himself to Spider-Man as The Spot. Spider-Man collapsed on the roof, laughing at the name. Spider-Man finally did get up and throw a punch, only to have it sink into a space warp on Spot's body. Spider-Man emerged from their first battle largely unharmed, since Spot's punches are those of a man with below-normal strength. However, Spot was the clear victor, and he came away from the fight with a better understanding of his powers.

Using the roof of the Fisk Building as his expected future battleground, Spot left several space warps scattered in various positions. Spider-Man arrived again to face the Kingpin, and Spot appeared and fought him instead. Spot was more aggressive in their second fight, scattering more and more space warps to attack Spider-Man from any position. This proved to be Spot's downfall, as he eventually threw enough of the spots off his own body that he left himself vulnerable to attack. With just a few punches, Spider-Man traumatized the Spot into believing that he was not cut out to be a super-villain. (Spectacular Spider-Man #99)

After years of silence, the Spot returned to crime at the invitation of the Grizzly and the Gibbon. Neither of these two were especially fearsome criminal masterminds, a fact noted by their final member, the Kangaroo (Hibbs). Hibbs muttered to himself that at least they hadn't invited the Spot, when the Spot arrived. When Grizzly complained that he was late, Ohn explained that he had been there for an hour but couldn't find parking for his car. Grizzly reminded him that he could teleport and Spot realized he could have left the Toyota at home. (Spectacular Spider-Man #245)

The group was soon in the process of robbing the Midtown Savings Bank, despite the protests of Grizzly and Gibbon. They were more interested in revenge, while Spot was focused on "retiring in style." Grizzly demanded revenge on Spider-Man and Spot said he humiliated himself more than Spider-Man had. Grizzly and Gibbon decided to leave, but used the bank vault and set off the alarm. Spot and Kangaroo left via the portal they had arrived in. Spidey soon followed the police to where Grizzly and Gibbon were hiding, accusing them of the bank robbery. Spot and Kangaroo then arrived, taking responsibility for the robbery. Gibbon knocked Spidey out and they went back to their secret hideout...Grizzly's apartment. The group was arguing about what to do with the money when a fight broke out. Spot pummeled Grizzly from afar with his portals, until Grizzly and Gibbon grabbed his limbs and pulled. This pulled Spot back to our dimension and knocked him out. Spidey then told them he had been awake the whole time and was only going to take Spot and Kangaroo to the police. (Spectacular Spider-Man #246)

The Spot was killed by Tombstone after helping the pale faced criminal escape from prison. His death was short lived though, as the Hand used their mystical powers to revive Ohnn. A revived and brainwashed Spot, along with a number of other "lesser" villains were defeated by Wolverine as they attempted to overtake a S.H.I.E.L.D. heli-carrier.

Ohn had been working for M.O.D.O.K. but he was betrayed by the Mandarin. Mandarin used one of his rings to trap the Spot in his own anti-dimension and he wasn't able to find a way out as he hadn't been sent there of his own free will. Trapped and alone, Spot began to go mad and tried to focus on his son. He eventually found his way back to earth but found that his son had been put into a coma after a drive by shooting ordered by the Russian mafia. Spot took his revenge by killing the gangster's crew and stalking the boss, Dmitri Ivankov. Spider-Man happened to be staking out a weapons demonstration hosted by Ivankov when Ohn attacked. Spidey saved the mobster but when he tried to get the silent Spot to speak, Ohn showed him a note explaining what happened. However, in his madness, the note was merely a series of spots that were unreadable. Spot disappeared but left his hospitalized son a copy of his favorite book, Treasure Island. Ivankov was left in a psychiatric hospital, terrified that the Spot could come for him at any time. (Amazing Spider-Man #589)

Not long after the Spot's first run-in with Daredevil, Ohnn was captured and hooked up to a machine that transferred his powers to another (more violent) villain known as Coyote. During a battle between Daredevil and Coyote in an underground layer in Arizona, DD was able to free the Spot from his entrapment. Once freed, the effects of being tethered to the machine mutated the Spot into a raging, multi-limbed abomination. The ever tortured Spot sought out and eventually sucked Coyote into one of his many portals. The current location of both Coyote and the Spot are unknown. (Daredevil #21)

He turned up again after Mr. Negative managed to topple Hammerhead and Tombstone from their thrones, leading to chaos in the various New York gangs. Many lower ranking criminals took advantage of the power vacuum, and Spot was seen fighting the White Rabbit and her gang. (Amazing Spider-Man #19.1 vol 3)