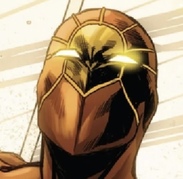 When Spider-Man met Vice Chancellor of E.S.U. Edward Lansky, he was taking pictures for the Bugle. He was bored listening to Lansky go on about education for all students despite a financial crisis, until he saw him being kidnapped by Tarantula (Rodriguez). Tarantula held off Spider-Man while his men took Lanksy to a car and soon they all got away. Later, Peter noticed his spider sense was tingling around a Lincoln that looked like the Tarantula's getaway car. He followed it to city hall, where Tarantula tried to kill the mayor. Spidey saved the mayor but Tarantula escaped. (Peter Parker, The Spectacular Spider-Man #1)

Lansky was soon breaking up a fight between the Tarantula and Kraven the Hunter, whom he had hired to assist Tarantula in kidnapping several university officials. One was Richard Gorman, whom they captured quickly and escaped. While Kraven later dealt with Spider-Man, Tarantula delivered Gorman to Lansky. He paid Rodriguez and ordered him to leave, but gave him trick money that exploded into gas and knocked hm out. He knew too much. (Peter Parker: The Spectacular Spider-Man #2)

He was waiting for Tarantula when he woke up and he wanted to test his powers against him. Rodriguez was blinded by an intense light which threw him into a support beam. Lightmaster stood above his unconscious body, saying he was "the first to feel the shattering force of solid light!" Lightmaster found that Gorman was awake and used a diffuse light burst to knock him out. He flew off, beginning the next stage of his plan. He drew the attention of Spider-Man after seeing his light flashing in a window at City Hall. Upon inspection, Spidey found Lightmaster as he stood over City Controller Goldin. He began ranting at Goldin, saying he knew better than to believe in some "fiscal crisis." Lansky spotted Spider-Man eavesdropping, and tried hitting him with a ray beam. He cut through Spider-Man's webs with a solidified axe of light then knocked him out a window with a light blast. Lightmaster escaped with Goldin and when Spidey tried to tag him with a spider tracer, it bounced off the surrounding light. Spider-Man had to let him go, as he was still seeing stars from the flashes of light.

Peter went to see Joe Robertson to get advice on how to research the kidnappings of Lansky, Goldin and the attack on the mayor. Robbie sent him to the obituary storage room, where information on important people was kept on file. After looking at one file, he found the info he needed. After applying filters to his mask's lenses, he dove into Lansky's skylight. Lansky was dressed as Lightmaster and immediately confessed. He claimed that the whole plan was to get rid of corrupt officials that were denying funds to the university. A light beam knocked a hole in the wall and the fight went outside. Before leaving, Lightmaster told the tied up Gorman and Goldin that he would kill them later.

Spider-Man guessed that Lansky planned to replace Gorman as E.S.U.'s chancellor and commit some robberies to enrich himself. Lightmaster corrected him, saying he planned on donating his stolen cash anonymously to the university and that he would have been a better leader than Gorman. At this point, he had bigger plans. He was Lightmaster and he was invincible! Spidey led him to a movie theater, where he shorted Lansky out with the main switch of the control panel. Unfortunately, doing so dropped NYC into a blackout. (Peter Parker, The Spectacular Spider-Man #3)

When Spidey and Lightmaster met again, he had hired the Enforcers (Montana, the second Ox and Fancy Dan) to lead him into a trap. They took over the Coffee Bean and waited for Spider-Man to show up. Flash Thompson and Sha Shan were some of the customers, as were Holly Gillis and Hector Ayala. Spider-Man, not surprisingly, soon defeated the Enforcers and Hector had stayed behind to watch the fight. Once Spider-Man had left, Hector walked out and told the police that the Enforcers had been beaten and were inside. Lightmaster watched the news from his television, believing Hector to be Spider-Man. In prison, he had reasoned that Spider-Man was an E.S.U. student, one about Hector's age. It was also suspicious to him that only Hector walked out of the restaurant after the fight. (Peter Parker, The Spectacular Spider-Man #19)

"Where Were You When the Lights Went Out?"

Lightmaster was pleased with the Enforcers performance, as he only wanted them to draw out Spider-Man. In his abandoned lightbulb factory, Lansky gloated over his discovery and ranted about how the previous fight had turned him into a being of pure energy. His atoms began to scatter from him in prison and he found that he needed to surround himself with light at all times to survive. He soon arrived at ESU and formed a light cage around Hector, in front of Peter. Lansky hit Hector with a light beam, knocking away his white tiger amulet. Peter tried to attack Lightmaster, who battered him back. Unnoticed by Lansky, Peter put a spider tracer on Hector.

Spider-Man followed the tracer to the abandoned factory and found Lightmaster ranting at Ayala to get up and stop acting sick. (Ayala got sick when he was away from his white tiger amulets.) Lightmaster planned to expose Hector as Spider-Man on live TV but Spidey dropped the amulets through the skylight to Ayala. As Lightmaster told the audience that Hector was Spider-Man, he panned the camera to find the White Tiger instead. During the fight, Spider-Man thought he crawled out of an air vent but found himself in a giant display lightbulb on the roof. Lightmaster tried to fry him inside of it and somehow overloaded New York's power grid. Left in the dark, Lanksy faded away. (Peter Parker, The Spectacular Spider-Man #20)

Lightmaster ended up in a "light dimension'' and found his way back to earth by absorbing the light given off by the hero called Dazzler. His energy hounded her across New York and eventually caught up with Dazzler. She was a source of light, and his body required light to sustain itself. He intended to use her as a battery, and when she tried to run he shot an energy beam at her. This shattered a wall of a theater behind her, a theater where Peter was watching a movie. Spider-Man soon attacked Lightmaster but was thrown into a water tower and left behind as Lansky escaped with Dazzler.

He took her to his former lab at Empire State University and after putting her in a machine to examine her, found her to be a mutant. She was a musician and gave concerts, where the music increased her power. As Dazzler became more powerful with every performance, he gained strength by draining it from her. Spider-Man arrived and before the fight could start, Lightmaster turned a lever to drain Dazzler's energy. The machine overloaded and blew up. Spidey and Dazzler only survived after he cocooned them in a ball of webbing.

Lightmaster was nowhere to be seen but Dazzler immediately turned on him, chasing Spider-Man all over town. He only escaped her by webbing her eyes closed and changing to Peter Parker. He later guessed that the explosion had sent Lanksy back to the light dimension but that he was still linked to Dazzler. Spider-Man had placed a tracer on her and soon found her huddled in an abandoned building. Lightmaster immediately took control of her again but Spidey somehow depowered him by webbing her eyes closed again. Taking Dazzler back to Lansky's lab, he put her back into the machine and hit the switch. He had reversed the switch and it took Lightmaster back to the light dimension, freeing Dazzler. (Amazing Spider-Man #203)

"The Resurrection of Edward Lansky"

Sometime later, Lightmaster takes control of Quasar's energy wristbands and uses their power to escape the light dimension. Spider-Man joins the fight and Lightmaster is again defeated. But this time, with Quasar's help, Edward Lansky returns to his regular human form. (Marvel Team Up #113)

In his most recent appearance, Lansky is released from prison into the care of Genetech, a company seeking access to the light dimension. He uses Genetech's machines to turn himself back into living light, and then seeks out Dagger in order to siphon her energy. (Amazing Spider-Man Annual #26)

But Cloak defeats him by absorbing him into his realm of darkness. When he is spit out again so that the Genetech crew can reclaim him, Lansky is little more than a skeleton with a trace of Lightmaster's light. But Genetech believes it can regenerate Lansky, so they stick him in a big regenerating box where, for all we know, he still is.

Soon, he also enlisted the Masters of Evil to aid the Wrecking Crew as a diversion to Spider-Man and the Six. While his allies fought Spider-Man, he went after the particle engine at Parker Industries. Lanksy began escaping with the engine when he noticed Sun Girl...his daughter. Spider-Man had her destroy the engine with her light powers, which activated the engine instead. Soon, the lot of them found themselves in a New York full of grounded air planes, ships and sand. Plenty to feed the out of control Sandman. (Superior Spider-Man Team Up #6)

Lanksy believed his daughter had died in the explosion and was inconsolable for the rest of the crisis. Spider-Man lost control of the Superior Six and they reverted back to their sociopathic personalities. Despite shocks from Electro and being dropped by the Vulture, Lansky didn't tell them how to use the particle engine. The situation only ended after Spidey and Sun Girl worked together. Afterward Lansky went back to prison. (Superior Spider-Man Team Up #7)