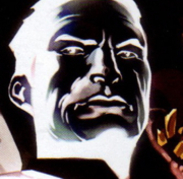 Martin Li is a philanthropist in the Spiderverse, so that's the first indication that he's actually a villain. And he ranks up there with the most duplicitous of bad guys, flipping back and forth from his Mr. Negative persona and Martin Li, he's managed to benefit both of their agendas.

The public's understanding of Martin Li's personal history is much different than the actual tale. Currently, inhabitants of the greater NYC area (and beyond) believe Li to be the sole survivor of a tragic shipwreck that killed nearly all passengers. The ship, called the Golden Mountain, was carrying illegal Chinese immigrants that were brutally transported from the Fujian province to the United States. The horrid conditions of their travel led many of the passengers to die en route, and the rest drowned after the ship ran aground just off the shore of NYC. Martin Li, one of the illegal immigrants, swam to shore successfully and had since built a large fortune, dedicating himself to helping the less fortunate. He became known as Martin 'The Martyr'.

The real story is quite different. Li was actually a member of the crew of the Golden Mountain and thus a member of the Snakehead gang responsible for transporting and profiting from the illegal immigrants. During a storm, Li panicked and forced the ship's captain (at gunpoint) to take the vessel into shallow waters, causing it to run aground. He then stole the identity of one of the deceased passengers (Mr. Martin Li) and was able to swim to shore successfully because he was in good physical shape, unlike the deprived passengers. Once ashore, he sought out the rest of his gang but discovered that they were all slain by the Maggia, led by Silvio Mandfredi (aka Silvermane). Silvermane's gang then captured Li and imprisoned him, placing him amongst a host of other inmates, mostly consisting of runaways. While imprisoned, Li was subjected to experimentation by Maggia chemist, Simon Marshall, which had seemingly led to Li's transformation to Mr. Negative. Li was able to escape prison with the help of two inmates that were also experimented on by Marshall. The two runaways' names were Tyrone Johnson and Tandy Bowen. Ring a bell? It should, because they comprise the duo Cloak and Dagger. Cloak's use of the Darkforce is most likely related to Mr. Negative's power-set, since they were exposed to similar treatment from Simon Marshall. It is unclear as to whether or not Mr. Negative is a mutant like Cloak and Dagger. After escaping the Maggia's prison, Li built up a fortune using both personalities and began a war to topple the Maggia.

Peter Parker had come into contact with Mr. Negative/Martin Li on numerous fronts. For one, Martin Li runs the FEAST (Food, Emergency Aid, Shelter, and Training) center in which Aunt May volunteers her time to help the less fortunate. As Spider-Man, Peter battled Mr. Negative when the latter tried to wipe out the Maggia and Karnelli crime families using a weapon known as The Devil's Breath. This weapon used blood from the crime bosses to generate a DNA-specific assault on anyone in the Maggia or Karnelli family lineage. Spidey was able to save the children from the crime families, but in exchange he gave Mr. Negative a sample of his own blood (so that Negative to generate a weapon against him).

Randall Crowne placed Martin Li on his 'list' when Li endorsed Bill Hollister for mayor. Around this time period, Mr. Negative rehabilitated the gangster Hammerhead, who had been shot by the criminal named Underworld. Mr. Negative re-fitted Hammerhead with an adamantium skeleton and in return, Hammerhead gave his allegiance to the crime lord.

Mr. Negative displayed one of his more unusual powers when he came across the terminally ill Eddie Brock at the FEAST center. Li's touch caused a strange immuno-reaction in Brock's body that eventually led to him ridding his body of cancer. And when Brock was confronted by Mac Gargan (aka Venom II), the trace amount of the Venom symbiote in Brock's body fused with his wbc's (white blood cell's), converting Brock into Anti-Venom. Brock, as Anti-Venom, later uncovered Li's secret alter ego as Mr. Negative and he is one of a few people privy to that information.

During Norman Osborn's Dark Reign, Mr. Negative battled Osborn's cohort, The Hood, when he made a move on Mr. Negative's turf in Chinatown. Throughout the course of Mr. Negative's confrontation with The Hood, Li utilized another interesting power that he has, mind control. In order for Negative to employ this, he must first touch the individual, after doing so, the person becomes bent toward Negative's will. The more good/decent the individual, the more dark/malevolent they become. Mr. Negative corrupted Spider-Man in this manner and Spidey nearly killed Betty Brant because of this mind control (not to mention he said a few distasteful things about his Uncle Ben and Aunt May). Mr. Negative's confrontation with Osborn and The Hood was resolved when Li presented incriminating documents to Osborn, revealing Oscorp's experimentation on Chinese illegals. Norman called off his siege on Chinatown in return, but Li double-crossed Osborn when he used The Spot to steal back the incriminating evidence. The Spot and Mr. Negative share a vendetta against the Maggia family, so their mutual interest made them allies.

Mr. Negative later corrupted Aunt May with his 'negative' touch (that sounds funny!), but she soon shook the 'corruption' and returned to normal. Mr. Negative is also among the villains sought out by Doc Ock to find Lily Hollister and steal her newborn baby (conceived with Norman..err Harry Osborn). The crime lord didn't spend much time on the case and quickly went back to the drug trade. This brought the attention of the Wraith, Anti-Venom and Spider-Man. While attempting to smuggle drugs in statues from Asia, the heist was interrupted. Wraith turned the tide by exposing Mr Negative's ID to the world. Negative and the Inner Demons escaped but Negative vowed vengeance. Martin Li woke up soon after, shackled in a dungeon. He cried out for help but the gang members ignored him. He didn't matter until he regained the Mr Negative personality.

After Mr Negative returned, he went to a psychic in Chinatown called Suan Ming. She had warned him previously that he would soon be killed and Negative demanded to know who would try to do it. Ming told him it would be Dagger.

His FEAST headquarters has since been purchased and converted to a medical center by Dr. Eli Wirtham, aka Cardiac. (Superior Spider-Man #8)

After the Kingpin was removed from the top of the New York mafia, the power vacuum invited a gang war. Lonnie Lincoln, aka Tombstone, had been arrested on suspicion of weapons hoarding but was soon released by a judge that claimed the warrant was defective. The warrant was based on information supplied by Martin Li, who wanted the police to take out Tombstone. Negative brought photos allegedly showing the judge taking drugs from one of Tombstone's men, in order to show that the judge had a conflict of interest. This information was given to police Captain Yuri Watanabe, who was also the vigilante called The Wraith. Wraith and Spider-Man broke into one of Tombstone's construction sites looking for evidence linking the judge to Tombstone and after defeating Tombstone's goons, Watanabe delivered information to Martin Li. (Amazing Spider-Man #16.1 vol 3)