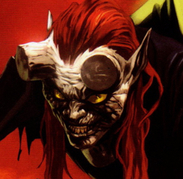 Using an old journal belonging to Harry Osborn and some fancy new Goblin serum, Lily Hollister transformed herself into the villain Menace and began playing politics.

Lily's sense of entitlement did not come by accident, she was the daughter of a wealthy attorney named Bill Hollister. Even though money was never in short supply for Lily, her father's love was and she was always very jealous that he favored her childhood friend, Carlie Cooper, over her. Carlie, a forensic specialist with the NYPD, was Lily's roomate in NYC. Lily's father, now a city councilman and Manhattan's district attorney, caught the eye of Harry Osborn as a potential political candidate worth investing in. Harry met Lily (sound familiar?) while researching the various candidates and the two became lovers. They were both convinced that Bill Hollister could win the city's mayoral seat, but Lily wanted to secure the victory.

Soon after Harry and Lily began dating, Lily grew concerned about Harry's stress level as he struggled to get the Coffee bean back up and running. Believing that Harry was back on drugs, Lily began snooping through his closets and eventually she stumbled upon one of the journals that he made back when he was the Green Goblin. Using the journal, Lily uncovered the location of one of Norman Osborn's Goblin hideouts and she decided that some dirt on Norman may help build a cause for her father to run for mayor. But that's not what she found, instead, while Lily perused the hideout, she accidentally knocked over some experimental serums and absorbed them through her skin. She soon realized that she could transform into a Goblin-like creature with increased strength at will! Lily's reign as Menace had begun.

Lily's first plan as Menace was to simply open a slot for her father in the mayoral race by driving one of the candidates out. During a mayoral debate between Randall Crowne and councilwoman Lisa Parfrey, Menace arrives and kidnaps Parfrey. After Spider-Man and Jackpot team up to rescue the councilwoman, a miscalculation by Jackpot leads to Parfrey being tragically killed as the glider crashes into her. Hollister soon enters the race and Menace continually 'attacks' her father's campaign events in order to foster sympathy for him in the polls. Lily even goes as far as to call Menace out publicly, telling the villain to "bring it on, ugly".

Randall Crowne was quite aware of his rapid drop in the polls and things got worse whenever Menace popped up. When Menace blew up a Hollister campaign truck, the explosion unveiled a sweatshop owned by Crowne, which became a PR nightmare. Crowne then called in his old friend Norman Osborn and his Thunderbolts team to detain the Spider-Tracer killer in order to win some PR support for Crowne. While in NYC, Osborn was confronted by Menace who warned Norman to leave the city and get out of her way. The two trade blows and Menace eventually gets the upper hand, but she leaves suddenly claiming she has "got places to be".

Interestingly, during the Skrull's secret invasion it was Jackpot who first noticed that Menace may not be wearing a mask. She made the observation while struggling to remove the mask during a confrontation with the villain.

Lily's duplicitous lifestyle continued on for some time and her relationship with Harry progressed as well. Eventually Harry decided to propose to her and he did so while on a date with Lily at the Statue of Liberty. But Lily turned down his proposal, sighting his past as the Green Goblin as a major concern. When Harry goes back to Lily's house to explain why she should marry him, he inadvertently stumbles upon Menace reverting back to Lily's human form. With the cat out of the bag, Lily shares her origin with Harry and he can barely stomach the news. Their relationship ends but Harry is not through with Menace. On election day during a battle between Spider-Man and Menace, Harry arrives on a Goblin glider wearing a Goblin mask and fires a serum into Menace. The serum causes Menace to revert back to Lily, and this is all caught on the news. Lily is outed as Menace and her father's mayoral chances end immediately. Later, while detained, Norman approaches Lily and welcomes her to the family, a new union forms. As Menace, Lily later confronts Harry and tells him she's 'moved on'.

During Norman's Dark Reign, he and Lily devise a plan to help garner support for his cause. They want to convert Harry to an Avenger, named the American Son, and have him die as a martyr, helping Norman earn more sympathy from the public. Lily baits Harry by telling him that she is pregnant with his child, this causes Harry to accept Lily once again. Harry then reluctantly accepts his father's offer to become an Avenger as he secretly searches for a cure for Lily so that the two can live a normal life (good luck!). When Harry approaches Lily with the cure, she turns him away and tells him about their plot against him and that the true father of the child is Norman. Lily stays off-radar for a significant period of time, remaining in Norman's protection at the Avenger's Tower.

However, after Norman's failure during his siege on Asgard that ultimately led to his imprisonment in the Raft, Lily became very vulnerable. Lily frantically gave birth to a baby boy while on the run from a group of super-powered villains, it was Doc Ock that delivered the child. Spider-Man quickly rescued the baby and struggled to get him to safety. Spider-Man inadvertently handed the baby over to the Chameleon, who was disguised as Harry. Meanwhile, Carlie took Lily to their apartment where they were followed by Tombstone, who hoped that the baby would eventually end up back with Lily. After it was returned, he would take it to Octavius. He was stopped by Lily, who impaled him with her goblin glider. After Spidey rescued the baby from the Lizard and Octavius, he let MJ know that the kid was safe and she passed the info on to Lily. Lily left on her glider, saying that Osborn's men would be hunting for her and that she would be a danger to her son. She wanted MJ to tell her baby that she loved him.

Menace returned, under the employment of the Green Goblin. Her first duty was to break the Hobgoblin (Phil Urich) out of police custody and deliver him to the Goblin. (Superior Spider-Man #16)