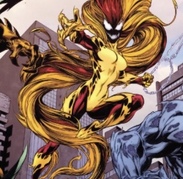 Unlike other Symbiotes - Venom, Carnage & Toxin - who's own Symbiotes were born from the last and then bonded with a chosen host, Scream was created by man in a laboratory.

Venom, in his pursuit for Roland Treece, was tricked and then captured by the head of the Life Foundation, Carlton Drake, in their research complex deep beneath the Mojave desert. Once captured, the Life Foundation went about extracting the last remaining Symbiotic 'seeds' out of Venom so they could make and control their own Symbiotes, or 'guardians' as they called them. They would then sell them on at a high price as a form of super-powered security guard.

Screams first real test came when she ran into Spider-Man at a shopping mall near Salinas - California, where she was testing out her newly acquired suit. Despite causing a lot of damage to the mall, due to her inexperience and naivety Scream was just no match for Spider-Man, who easily out fought her. Scream quickly radioed back to the Life Foundation to be picked up immediately, throwing an innocent civilian at a window to distract Spider-Man whilst she escaped to the roof where a hovercraft was waiting to pick her up.

Unbeknown to her and everyone else, Spider-Man had hitched a ride on the underside of the craft back to the complex. Realising that Spider-Man was inside and coming after Venom, Drake sent all five of his guardian Symbiotes after him, forcing Spider-Man to team up with Eddie Brock (who had just recently been separated from his Symbiote) to try and defeat these new Symbiotes. Using sonic blasters they managed to hold them off long enough for Eddie to find and re-bond with his Symbiote. Becoming Venom once again!

Venom finally defeated the guardians by using the same machine that aged the Symbiote 'seeds' ready for bonding and blasting them with it. Causing their Symbiotes to age rapidly and leaving the hosts in a pile of smoke and dust on the floor, but still alive. Drake quickly blew up the research facility and all evidence of what he and the Life Foundation had been up to. (Venom: Lethal Protector #1-#5)

Did Scream and her four Symbiote siblings survive the blast? As it turned out yes they did. Their Symbiotes all regenerated and they re-bonded. Struggling to control their Symbiotes, Scream headed to New York City in search of Venom so maybe he could help teach them how to control their own Symbiotes. Venom wanted nothing to do with helping her or the others and only wanted to kill them all. Stating that they're just as bad as Carnage and must be destroyed! Scream managed to put up a good fight, but when the Scarlet Spider showed up to take on Venom, knocking him into the river, Venom dragged Scream down with him into the water.

In a last act of desperation, Scream even approached the Scarlet Spider for help with tracking Venom down. When he refused, Scream went ballistic and went on a rampage in Times Square. Ironically, this drew Venom out and the pair fought. Unfortunately for Scream, it wasn't long before Venom gained the upper hand and she was over powered by the much stronger, more experienced Symbiote, who then went about literally tearing the Symbiote off of her. Scream begged for her life and was only saved when the Scarlet Spider showed up and defeated Venom. (Spider-Man #52)

This violent encounter with Venom didn't discourage Scream it seems and she once again went looking for Brock and his help. Only this time she was aided by all four of her Symbiote siblings. Scream, the obvious leader of the group, distracted the guards whilst the others disposed of them but under strict orders to control their Symbiotes and not to kill anyone. Once inside the facility, they found Brock - who had been separated from this Symbiote - and took him back to their hideout on the outskirts of Chicago.

They once again asked Eddie for his help with controlling their Symbiotes and once again Eddie refused and instead tried to kill them all even though he was without his Symbiote.

Eddie managed to escape and went on the run but unfortunately for him his disappearance coincided with the murder of Leslie - the other female Symbiote member of the group. This led the others to believe that Brock was the murderer. They no longer wanted his help, they wanted him dead!

The four remaining 'Guardians' tracked Brock down to a warehouse somewhere in Chicago and it wasn't long before another 'Guardian' was picked off, this time Carl, with the same sonic dagger that killed Leslie. With the help of the two remaining Symbiotes, Scream captured Brock and tied him up. Not long after we learn that it wasn't Brock killing the other Symbiotes, it was in fact Scream! She then went about killing the last two - Trevor & Ramon - but not before confessing that she could here the 'voices' long before she'd bonded with her Symbiotic other. Scream then turned her attentions to the helpless Brock but before she had a chance to kill him, Brock's own Symbiote came crashing in through the roof and instantly re-bonded with him. The two battled but it wasn't long before Venom was able to knock Scream out with a well placed right hook. Scream was then captured and taken away by the same people who had captured Brock earlier.

Since then Scream has crossed paths with Venom on a number of occasions and once even teamed up with him to help destroy Xenophage, a devourer of Symbiotes.

Donna stayed out of the spot light for quite a while, until Eddie Brock went after her. He had given up being Venom and lost the ability to become Anti-Venom after the events of Spider-Island. He came to see all symbiotes as evil and sought out to kill them. He attacked Hybrid and soon set a trap for Scream, stabbing her with a hot sonic knife.

When Knull came to conquer earth with his symbiotic dragons, they overran the planet quickly. Scream came upon a young boy about to be eaten by Lasher, after the kid's parents were killed in a car crash. Scream threw him away from the boy, forming a blob of teeth and tongues. Knull could sense Scream through the other symbiotes and he spoke through them, telling her that she was a vexing child and it was time for her to come home. Andi used her infernal powers (both heat and sound) to try and incinerate the symbiotes but they hit her with webbing (made of teeth) and threw her into a car. Knull told her that being bonded to Andi made it weak, just like every symbiote that had bonded to a human had become weak. Andi would be devoured, as would every other human and human-like creature. Scream was absorbed into the blob, but it was burned away from the inside by Andi. She knew that while earth was temporarily covered in darkness, Hell still burned bright beneath them. As Andi took the boy from the car crash to safety, remains of Lasher, Phage, Riot, and Agony crawled away. (Planet of the Symbiotes (vol. 2) #1)