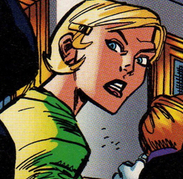 Norman Osborn rolled the dice in the Gathering of Five ritual and drew insanity (which for him is not a far trip!), fortunately for him though a beautiful swedish nurse was there to help him on his road to recovery.

Norman, with the ever-loyal Donald Menken by his side, struggled to combat the insanity brought on by the Gathering of Five ritual while staying at one of his numerous safe-houses. In addition to Dr. Albert Bendix, Menken helped procure a nurse as well, named Kolina Frederickson. During his recovery, Norman spent a lot of time with Kolina and he soon became smitten with her, as she reminded him of his deceased wife Emily. As time went by and Norman's health began to improve, he suggested that Kolina remain on as his nurse after he leaves the safe house to return to his estate. Kolina obliges and soon a romance begins. The always cold and stern Osborn shifted into quite a softie as he wined and dined Kolina, wooing her with roses and ballroom dancing! Kolina could not resist the charm.

Kolina and Norman grew close to one another and he even opened up to his nurse, sharing his family history and the failures of his father, Amberson Osborn. But Kolina soon became aware of the dark side to Norman's character and often found him sitting alone in the dark, something she found troubling. One night while searching for Norman, Kolina found her way into one of his Goblin lairs and she accidentally snuck up on him while he was in his Green Goblin costume (technically he was in his Goblin-Lord costume). Kolina's entrance startled Norman and, unaware that it was Kolina, he turned around and tossed a pumpkin bomb in her direction, nearly killing her. Norman became immediately regretful for his actions.

Seeing Kolina lying unconscious reminded Norman all too much of his deceased wife and when she eventually awoke, he decided to come clean and tell her the truth about his villainous alter ego. After he shared with her the origin of the Green Goblin, Norman boasted as to how much his life had improved because of his exposure to the serum. Kolina, thinking Norman had lost it again, suggested that he take more meds via his dermal patch. This set Norman off and he attacked his nurse for doubting his reasoning that the Goblin formula was a blessing. Kolina's similarities to Emily Osborn saved her in the end though, because Norman could not bring himself to kill her. Menken, who had already expressed his non-approval for Norman sharing the Goblin history, stepped up to finish the job. But Norman quickly intervened and snapped Menken's arm and then strangled him. Kolina quickly slapped a dermal patch on Norman's neck causing him to calm down, this move by Kolina most likely saved Menken's life. After Norman settled, he ordered his servants to take Kolina and Menken to his Adirondack estate. Neither of them have been seen since.