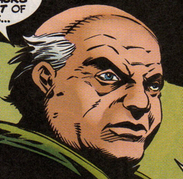 First introduced as the quirky owner of a pawn shop in Greenwich Village, Morris Maxwell was transformed during the Gathering of Five ritual that Norman Osborn had initiated.

Morris Maxwell came into the association of Norman Osborn when the latter was in search of the five shards necessary for performing the arcane ritual known as the Gathering of Five. Maxwell had one of the shards in his possession for a 'very long time', so long that he and the shard had come into a 'mutual understanding' (whatever that means!). Morris served as an advisor to Osborn in regards to the proper execution of the ritual, frequently warning Osborn about the perils of attempting the Gathering. Eventually Osborn, Maxwell, Madame Web, Martha "Mattie" Franklin, and Dr. Greg Herd (aka Override) performed the ritual and the five 'gifts' were distributed amongst them. At first it appeared that Maxwell was granted the 'gift' of insanity but instead he had been given the 'gift' of knowledge. After the ritual and all the melee that ensued, Maxwell returned to his pawn shop in possession of the center piece to the Gathering, the spindle!

When the mysterious villain named Dolman attempted to reclaim the spindle, he used Shadrac (aka Dr. Greg Herd aka Override) to track down Maxwell. Dolman claims the spindle was stolen from him by 'agents of Norman Osborn' (most likely Scriers), and Maxwell was taken hostage by Dolman. Maxwell is eventually saved by Spider-Man and Iceman as Dolman and Shadrac merge into one being. Interestingly, Spider-Man clearly meets Morris for the first time in Peter Parker Spider-Man (Vol. 2) #3, but appears to have never met him when they're introduced again in Spider-Woman (Vol. 3) #9.

Morris remains off-radar for some time but is soon sought out by Mattie Franklin (now operating as Spider-Woman III) after she haults a bank robbery aimed at stealing the shards from the ritual. Morris tells Mattie that his shard was in that bank, even though Madame Web had encouraged all the participants to destroy their shard after the ritual. As time goes by, Maxwell has periodic run-ins with Mattie as she tries to utilize his newfound gift of knowledge, but his 'gift' is not what it seems. Morris tells Mattie that even though he 'knows everything', in order for someone to attain the appropriate information from him, they must first ask him the right question. This facet of his powers leaves the users in difficult situations because his answers to their questions become more riddle-like rather than straightforward responses. Also, whenever Maxwell is in the process of retrieving the answers to the posed questions, his body goes into convulsions as he collapses to ground foaming from his mouth and eyes. He then enters a trance-like state as he utters his 'answers'.

Maxwell makes his last known appearance in the Spiderverse in Spider-Woman (Vol. 3) #9, as he aids Spider-Man, Spider-Woman, Madame Web and Jessica Drew in stopping Doc Ock's creation, the Evil Spider-Woman. To date, Maxwell has not been seen and his current whereabouts are unknown.