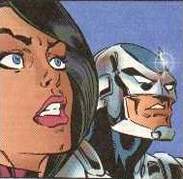 Aura and Override are a Husband and Wife team who gained their powers while working with Carolyn Trainer, the new Doctor Octopus. Aura has the power to project a force field, while Override can control any machine or electronic device within range.

The powers are given by their cybernetic costumes (ummm... I didn't think that a costume would count as cybernetics). Override claims to have designed the costumes, however the events of Spectacular Scarlet Spider #1 would seem to suggest that Carolyn Trainer provide some input - possibly funding and lab facilities.

They initially battled the Scarlet Spider, with limited success. Later, during the Spider-Hunt saga, they engaged Spider-Man for the price on his head. They were again unsuccessful, and during the climax of the battle, in a melee involving police, crazed goons with guns, and Spider-Man, an accident put Aura in hospital - devastating her husband.

Wanting revenge on Spider-Man, Override unintentionally got involved with the kidnapping of Norman Osborn Jr. Norman Osborn had created a fake Green Goblin to kidnap Normie, and make himself look innocent of the Goblin's crimes. After all, Norman and the Goblin had been seen together, so how he he and the Goblin be the same person? Norman hadnt counted on Override taking part in the fiasco, but he quickly found a use for him. Looking for any way to help his wife, Override agreed to take part in the Gathering of Five ritual with Osborn. Hoping for the gift of power in order to help Aura, Override instead recieved death and became Shadrac. His curse left with with the ability to kill anything he touched, but the power was also slowing killing him.