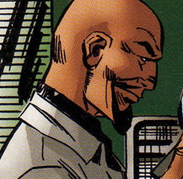 After attacking and killing a group of Bellevue attendants in order salvage the secret alter ego of Norman Osborn, Donald Menken needed to find someone who could bring Osborn back from his incapacitating insanity.

Dr. Albert Bendix was sought out by Menken because of his expertise as a medical doctor and a neuroscientist. Bendix was charged with the daunting task of restoring Norman's sanity (well, his 'sanity' pre-Gathering of Five ritual, not 'normal' people sanity). Bendix soon devised a cocktail of drugs that could be used to achieve this goal and once Norman began treatment they observed a significant improvement in Norman's mental state. However, Osborn grew dissatisfied with the intravenous method of drug delivery claiming that it handicapped him too much. Norman then scalded the doctor for this inconvenience, and Bendix quickly developed a dermal patch that could be used as an alternative to the iv.

As a reward for Bendix's hard work, Norman dressed him up as Spider-Man and allowed his Order of the Goblin to pummel him to death (Goblin-fodder if you will). Later, a mind controlled Peter Parker, garbed as the Green Goblin, tossed Bendix's body into the water below the Brooklyn Bridge. The next morning, Bendix, still dressed as Spider-Man, washed up to shore and Joe Robertson was there to identify the body (he recognized Bendix from a major malpractice trial that had occurred a few years prior). Robertson immediately concluded that this could not be the real Spider-Man, and Peter, who was at the scene as well, realized that something was amiss. It was the discovery of Dr. Bendix's body that eventually led Peter to the realization that Norman Osborn had been recently manipulating him and was forcing him to inherit the mantle of the Green Goblin.