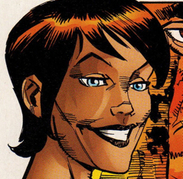 A rather significant matriarch of the Spiderverse, Emily Osborn, the deceased wife of Norman Osborn and mother to Harry Osborn, has remained rather mysterious over the years. The kind, loving, optimistic woman fell in love with Norman when he was still trying to reclaim his family's name and wealth. It is unclear as to whether or not Norman met her while he was a student at E.S.U. because Norman (or anyone else for that matter) has never explicitly stated how he met Emily.

There is very little known about Emily and she has only been used during flashbacks within stories. When Harry was teetering on the brink of insanity and experiencing ghost-like apparitions of his father, he found comfort in perusing old family photos. Emily was in the album and she's seen carrying an infant Harry and taking him to a local carnival. Unfortunately, that is the extent of Harry's account, a mother sharing a good time with her young son.

But the good times did not last, Emily died when Harry was very young (less than a year old). Norman implicated Harry's birth as a possible cause of her death, but no specific details as to the exact cause of her death are mentioned. One thing is clear, Norman loved Emily greatly. He says that they had "such plans [together]" and that he never felt "as whole--as balanced--as when he was with her." And when she passed away, Norman states that losing her was not worth gaining an heir in Harry. Emily's death is most likely at the core of Norman's resentment toward his son. Her death changed everything for Norman, and he began to refocus on his goal of obtaining wealth and restoring the Osborn family name when he lost her.

Later, when Norman was recovering from the insanity induced by participating in the Gathering of Five ritual, he was placed under the care of a swedish nurse named Kolina Frederickson. Norman noticed an immense amount of similarities between Kolina and Emily, specifically when his nurse suggested to him that he shouldn't brood so much. That comparison is a tremendous honor because Norman has stated that Emily was the best woman he'd ever known. The similarity saved Kolina later on when Norman was going through a fit of blind rage and was about to attack his nurse. Seeing Emily in Kolina caused Norman to turn on his cohort Donald Menken, who was about to harm Kolina.

For now Emily's past remains obscure, but it is certain that had she survived, the lives of Norman, Harry, and Peter Parker would have been significantly different.