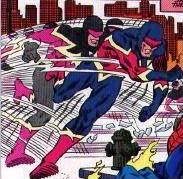 James Sanders was working as a pharmacist and a chemist when the alien Grandmaster approached him and made him an offer to join his super villain group called the Squadron Sinister. By giving Sanders a formula that he made, the Grandmaster granted Sanders with the power to move at incredibly fast speeds. James originally called himself the Whizzer and left his life in pharmacy behind to pursue a life as a criminal.

Later Sanders improved the formula that the Grandmaster gave him and increased his super speed, at the same time leaving the name of the Whizzer behind, now calling himself the Speed Demon. With his new and improved powers and his new name, the Speed Demon joined the Sinister Syndicate (Hydro-Man, Rhino, Beetle, Boomerang) to help eliminate Silver Sable, who just recently had Spider-Man in her employ. With Spider-Man's help and that of the Sandman, the Syndicate was defeated. (He has also been "defeated" by the Fabulous Frog Man.)

The syndicate rejoined later to pull some robberies together for some quick cash. During their first bank job, another member of the Syndicate, Boomerang, was arrested for going back to the scene of the crime to try and finish off a fallen Spider-Man. With Boomerang out of the picture, Speed Demon made many attempts to get together with Boomerang's girl-friend, Leila Davis, who was also the new get-away driver for the Syndicate.

Leila was just using Boomerang to get close enough to the Beetle who she blamed for being a factor in the Scourge killing her husband, the Ringer. With Boomerang now in prison and the Speed Demon showing her so much attention, Leila decided to now use Sanders to help her enact her revenge. Of course she doesn't get to kill the Beetle and everyone goes their separate ways after the Syndicate is broken up by Spider-Man and the Kingpin, who was working in the background against them.

Later still, James joined up with the Thunderbolts, a newly-formed team made up of ex-super-villains trying to make it as super heroes. The new team is led by MACH-IV, formerly known as the Beetle. In the team, James, constantly walking the line between good guy and bad, acts as the bad influence on his fellow teammates, especially that of the Blizzard.

Sanders joined a weak version of the Sinister Six, joined by the Living Brain, Boomerang, Shocker, Beetle II and Override (whom was in control of the Big Wheel). The group was stealing weather controlling equipment and planning on holding New York hostage, but they were defeated by the new Superior Spider-Man. Speed Demon was beaten by an anti-friction substance that made him fall when he tried to run. (Superior Spider-Man #1)