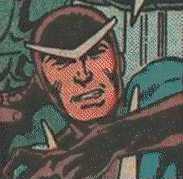 An Australian immigrant, Frederick "Fred" Myers moved to the States at a very young age. He had a passion for baseball and quickly rose to play for a major league team as a pitcher. However, he was caught taking bribes and was fired. Myers was taken in by the underground society known as the Secret Empire, who gave him tool, weapons and the name of Boomerang.

One of Myers first assignments was to get access to the U.S. Army's Orion missile defense as it was being used against the Hulk. Boomerang kidnapped Betty Ross to use as ransom but was, shockingly, defeated by the Incredible Hulk. The Secret Empire finally collapsed and Myers returned to Australia for several years, refining his equipment. After again finding employment in America, he became an assassin for hire. He was hired to kill Iron Fist and was defeated. Myers soon found employment from Libra and fought the Defenders.

Boomerang eventually faced Spider-Man after he was occupied by Viper (aka, Madame Hydra) to attack Nick Fury, Black Widow and Shang Chi. After that venture failed, he sought to win approval from the Kingpin by killing Spider-Man. He also attempted to break the Punisher out of prison and again battled the Hulk. Soon he was employed by Jack O'Lantern, whom formed the Sinister Syndicate and was made up of Rhino, Beetle, Hydro-Man, Speed Demon, and himself. Spider-Man, who was with Silver Sable at the time, were both saved by the Sandman. Sable then employed the Sandman as a freelance operative.

Over the following years, Boomerang met up with other costumed characters, including Loki, Iron Man, Hawkeye, Grizzly and Ghost. He has been employed by Justin Hammer and Cardiac. He made a major mistake the time he made an enemy of Daredevil. An open bounty was put on Matt Murdock's head and Boomerang quickly responded to the job. After Daredevil defeated another bounty hunter called Shotgun, he sensed Boomerang's presence on a nearby rooftop. Daredevil eventually chased him down and beat him after finding Murdock's picture in his pocket. Later, Myers tried to sue Murdock for one million dollars over the beating.

Boomerang worked with Shocker, Beetle, Jack O'Lantern (Steven Levins) and Scorpia for a $100,000 award by J. J. Jameson to find the Spider-Man clone skeleton found in a demolished smoke stack. The skeleton was protected by Ben Reilly, who feared that the body could be used to determine his identity.

Boomerang had other run ins with the wall crawler, most notably when he joined the Sinister Twelve, led by the Green Goblin. Their targets were Spider- Man and the Black Cat, but the Avengers, Fantastic Four and Daredevil showed up and put an end to the beating on Spidey.

Myers tried to be a traitor to his former boss, Norman Osborn, after Osborn became the head of the Thunderbolts. Norman viciously beat him and then forced Myers to work for him. Boomerang was briefly part of a group of other super-villains (forced to become heroes as part of the Fifty State Initiative) and took the name "Outback." He was still working for Osborn during the Siege on Asgard and fought the Avengers Resistance when they tried to attack Camp H.A.M.M.E.R.

Boomerang was later hired by the fourth Rose (Dr. Phillip Hayes) after Jackpot was getting too close to his production of the drug "Ebony." Hayes was, ironically, Sara Ehret's co-worker and he used the info to have Myers kill Ehret's husband in their home in front of her and their daughter.

Boomerang was later hired as a part of the Assassins Guild and fought Domino, X-Force and Wolverine. He was soon in prison, where he was eventually teamed with Centurius, Troll, Mr Hyde and Shocker.

He was very briefly released from prison by Hypno-Hustler. HH had used Deadpool to trick Spider-Man into breaking HH out of prison and when Spidey finally fought back, the other prisoners were released. Spider-Man quickly defeated the less than lethal foes (including the Painter) that he faced.

Myers tried to be a big shot and create his own Sinister Six after Doctor Octopus seemingly died from years of radiation exposure and beatings from vigilantes. He teamed with Shocker, Beetle II, Override (whom rode the stolen Big Wheel), the Living Brain and Speed Demon. The Six was defeated by the Superior Spider-Man at Horizon Labs after they tried to steal weather control devices. The new Spider-Man was particularly harsh in his beating Boomerang, as he intended to kill the crook as a warning to all other criminals. (Superior Spider-Man #1)

Imprisoned at The Raft, Myers had been in a body cast since his arrest. He was sharing a cell with the Vulture and Scorpion (who had been similarly beaten by the new Spider-Man) when they were freed and healed by Alistaire Smythe's robots. Smythe was about to be executed at that prison and his escape plans had been thwarted by Spider-Man. In return for their new found health and freedom, he wanted them to kill their mutual enemy. (Superior Spider-Man #11) The three of them nearly over powered the wall crawler when they got new orders from Smythe to kill Mayor Jameson and the other civilians (Glory Grant, Smythe's lawyer, a priest, the head of The Raft's security and Norah Winters). Scorpion went after Jameson and Vulture went to kill the hostages. Boomerang was defeated when Spider-Man webbed his exploding boomerangs to him. (Superior Spider-Man #12)

While Fred was in prison, he had Speed Demon and Shocker stop by a pet food store to get bird seed for his bird. Once they returned to his apartment, they found Hammerhead waiting for them. It was found that they hadnt gotten bird food but diamonds from the pet food store, which was a front for smuggling. Little did they know but Hammerhead was really the Chameleon, who had managed to slip out of prison. He was unhappy that Speed Demon and Shocker only brought part of what they has owed and Shocker was beaten for it. (Speed Demon ran away.) The diamonds turned out to be fakes, as Boomerang was trying to squelch out of money that he owed Chameleon. Back in prison, Chameleon met with Myers and told him that his gang now worked for him free of cahrge. Fred was released from prison on bail, after he tricked his gang into paying his bail with a (false) promise of a job. (Superior Foes of Spider-Man #1)

The "Sinister Six" (there were only five members in the gang after the Living Brain was captured) celebrated their reunion and upcoming "job" with dinner at an extravagant New York restaurant. However, it was booked solid with reservations and they were paid by a rival restaurant to trash the place and get it shut down for a few weeks. In New York time, a few weeks was enough for the extravagant restaurant to be forgotten. The Sinister Six were able to get in due to the lack of competition but their dinner was interrupted by the Punisher. The rest of the gang fled, but Punisher confronted the drunk Myers. It was revealed that the Chameleon was again impersonating to make the other criminals flee so that he could talk to Boomerang privately. He demanded that the gang bring him the head of Silvio Manfredi, Silvermane.

After "escaping" from the Punisher, Boomerang told the gang about his plan to steal the head of Silvermane. Little did he know, but the Shocker had stayed behind at the restaurant and witnessed the conversation between Boomerang and Chameleon. Shocker reluctantly agreed to join in the heist. Myers later met his lawyer for a parole hearing, where he fed the judge a line of B.S. about how he was a changed man and gave up crime. The judge agreed to his parole terms, but on the caveat that his parole officer be the super hero, Mach VII. (Superior Foes of Spider-Man #2)

Fred explained that Silvio Manfredi's head was so valuable because he was the leader of one of the largest crime families in New York, the Maggia. Silvermane was a cyborg who had lost his head in a battle with the Owl and his gang. Being a cyborg, his head was still alive because the battery was still in his helmet. If he was still alive, that meant he was still the leader of the Maggia and thus, very powerful and valuable. Supposedly a local kid had found the head and took it home with him, befriending the old gangster. Boomerang knew that this was nonsense and that Silvermane had been found and captured by the Owl, then tortured for the rival gangster's amusement.

Back at the gang's hideout, the rest of the "Sinister Six" wanted him kicked out of the group when they found out that he was going to be watched by Mach VII.