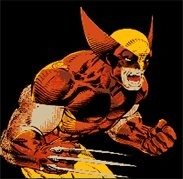 Wolverine was born James Howlett in Alberta Canada around the late 19th Century to a wealthy family. However, his life was far from privileged as he was always very sickly and bedridden. After the death of his eldest brother, Daniel, James befriended the governess living with the family, Rose, and the son of the Howlett's cruel groundskeeper Thomas Logan, known only as "Dog".

Dog was obsessed with Rose and attacked her, prompting James' father, John, to fire Thomas and evict them immediately. Unknown to everyone, Thomas and James' mother, Elizabeth, had been having an affair and he sought to convince her to leave with him. John interrupted them and Thomas shot him. The emotional trauma caused James' mutant abilities to manifest in the form of six bone claws, which he used to kill Thomas and slash Dog's face, permanently scarring him. Elizabeth became unhinged by the carnage and took her own life.

James suffered a breakdown, but his mutant healing factor apparently not only heals physical scars but emotional ones as well. All memories of those traumatic events soon faded, but the repercussions didn't. James was wanted for murder, so Rose changed his name to Logan and they joined up with a mining colony where the once frail boy grew up to be a man's man. He earned the nickname Wolverine because of his refusal to back down from fights. But it didn't end there; Dog, seeking revenge, tracked down Logan and Rose and they fought, resulting in Logan accidentally killing Rose with his claws. Logan disappeared into the woods, never to be seen for years to come.

Logan eventually turned up in a frontier community in the Canadian Rockies. There, he met a young Native American girl named Silver Fox and they became lovers. Their happiness was soon cut short by another resident of the community; Victor Creed, soon to be known as Sabretooth. He viciously attacked Silver Fox, ripping her throat out on his birthday. Logan tried to avenge her, but Sabretooth easily defeated him. Logan left soon after.

One benefit to Logan's healing factor was the retardation of his aging, letting him remain in his physical prime decades longer than the average person. Because of this, Logan was able to join the Canadian Army and fight in World War I as a member of the Devil's Brigade. When he left, he found himself in China training in martial arts under Ogun, a Japanese samurai and sorcerer. After a brief stint of adventure on the island nation of Madripoor, Logan met up with Captain America during World War II to help him take down the Nazi agent Baron Strucker and The Hand ninja clan. That sparked Logan to rejoin the Canadian Army for the war, assigned to the First Canadian Parachute Battalion as a Corporal.

After the war Logan was recruited into Weapon X, a multinational intelligence operation overseen by the American CIA. He was put in charge of Team X, comprised of himself, his supposedly dead lover Silver Fox, Maverick and his foe Sabretooth. False memory implants to ensure their loyalty despite past affiliations were placed in all their minds, standard operating procedure for Weapon X.

Logan eventually quit and became a spy for Department K, a secret branch of the Canadian government. Weapon X, seeking a guinea pig for their experiments in adamantium bonding, captured Logan and subjected him to the process, coating his entire skeleton and claws with the indestructible metal. They sought to control him with mental programming to make him the perfect assassin, but Logan's berserker fury won out. He fled the compound after almost killing everyone within.

James MacDonald Hudson, soon to be known as Vindicator, found him in the woods in his feral state and brought him back to humanity. Together they formed The Flight, a super-powered team operating within the Canadian Government's Department H. His first public mission for the Department was to capture the Incredible Hulk. The battle became three-way when Logan came between Hulk and his current adversary, the mythological creature known as the Wendigo.

Soon after, Logan was approached by Professor Charles Xavier to join his next generation of X-Men. He was recruiting new mutants to encounter the living island known as Krakoa to rescue his original students. Logan resigned from the Department and joined in their mission. He later stayed on with the X-Men due to his attraction to Jean Grey, aka Marvel Girl.

Despite his new dedication to Xavier's dream of mutant co-existence, Logan still finds time to go off on the odd solo adventure, most notably in his favored Japan or his second home, Madripoor. Logan's animalistic nature gives him a fierce and protective loyalty to those he calls his friends, and those who cross them or him usually regret their mistake. Despite all the trials and tribulations of his life, Wolverine remains the best there is at what he does; and that's not always very nice!

Wolverine and Spider-Man have met on many occasions, notably when they were in Berlin. Spidey was looking for the Hobgoblin, who was using Ned Leeds as a decoy. Wolvie also protected Midtown High School along with the Punisher during the Superhuman Civil War. Peter had revealed his identity to the public, which made his students at the high school potential targets of his enemies. Spider-Man and Wolverine are comrades, but they are not exactly friends. At least Wolverine doesnt have quite as bad a working relationship with Peter as he does with Matthew Murdock.

Logan has worked with Spidey against several of his enemies, such as Carnage, the Lizard and gave Peter advice on Norman Osborn during the "American Son" storyline.

Logan suffered a surprise attack on the Xavier School by Scarlet Spider III, who had been sent to kill him. Tje fight turned against Wolverine. who was stabbed through the chest. (Scarlet Spider #17) His heart healed and CPR from Beast saved him. Scarlet Spider was beaten and when he recovered, he told Wolverine his plan. He had been sent to kill Logan by the Assassins Guild. Spider decided to try and kill Logan and pay off his debt to the Guild. If Logan survived, they would go to New Orleans to take out the Guild together. Either way, the spider clone decided that his problem would be solved. In New Orleans, they took on the Assassins but were soon caught by a woman called The Red Death. (Scarlet Spider #18) The X-Men had faced The Red Death previously, managing to disintegrate the god-like woman. Kaine and Logan managed to turn the tide against her, with Scarlet Spider killing her with a wrist spike. The Assassins Guild was going to kill them for again destroying their god, when the Arranger (an agent of Wilson Fisk) showed up forced them to stand down with assassins of his own. Logan was not pleased with this turn of events, as Spider told him that he had agreed to turn over the Guild to the Kingpin. (Scarlet Spider #19)