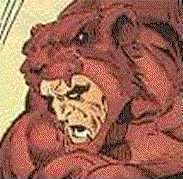 "Day of the Grizzly"

It had only been a few months since Gwen Stacy had been murdered by Norman Osborn when Max Markham showed up suddenly one day at the Daily Bugle. Looking like a nine foot tall bear, he cornered Betty Brant, Peter Parker and Joe Robertson. Peter escaped and Joe was batted across the room for his attempt to protect Betty. The Grizzly made his way to J. Jonah Jameson's office, where the angry publisher quickly realized that the racket outside wasn't Peter looking for a raise. Smashing through Jameson's office door, Grizzly then grabbed the publisher and threw him out the window. Spider-Man caught him in a web and confronted Markham in Jameson's office, soon learning that the Grizzly was tougher than he looked. Spidey faked being beaten and tossed a tracer onto the thug's back. Peter followed the tracer's signal to a mansion at Washington Square, hoping to find out more about the Grizzly as a reporter. Once he rang the bell, he was drugged by the Jackal, who was soon gloating that where Peter Parker went, Spider-Man would soon follow. (Amazing Spider-Man #139)

Peter was taken to the Jackal's operating room and knocked out by the Grizzly. When he awoke, he had been found by Betty and Ned Leeds, who took him to a restaurant to recover. Parker soon noticed that a device had been attached to his arm and a radio message told him that the device was set to vibrate his arm to powder. It was also a tracking device, which the Jackal hoped would lead him to Spider-Man. Peter decided to remove the device with a welder's arc at his college chemistry lab. Peter's gamble that the Jackal had been bluffing proved true and soon Spider-Man was at JJJ's home, looking for insight on the Grizzly. Jameson told him that he had first heard of the Grizzly eleven years ago, when he was a wrestler. Jameson and Robertson had gone to one of his fights and were stunned at the level of violence that Markham used. Jonah wrote a series of editorials condemning the wrestler and Markham soon lost his license. After learning that Markham was a former wrestler, Spidey hunted for him at local gyms and found him throwing around some men in a boxing ring. Spidey soon tore apart Grizzly's costume and strength enhancing harness easily defeated the powerless man. (Amazing Spider-Man #140)

Years later, Markham was out of prison and remembering his old wrestling days in a local diner with a scrap book. The drunk locals began to make fun of him, doubting that he had ever faced Spider-Man. He beat them to the floor and left, ranting that once he got his old harness fixed, it was rematch time. (The police gave it back to him upon his release as it was moth eaten and the metal was rusted and twisted.) The Tinkerer made the repairs to the costume and soon the Grizzly was stalking Peter Parker. Markham caught up to Peter on a Metra train in New Jersey, demanding that Peter arrange a rematch with Spider-Man. Peter slowly began to remember the Grizzly and then began to laugh at him. Grizzly then tossed him off the train and attacked Peter's traveling partners: Joy Mercado Cynthia Bernhammer, Martha Robertson and her son, Randy Robertson. (They were on their way to Pennsylvania to get Robbie, who had been found at an Amish farm after escaping prison with Tombstone.) After Spider-Man showed up, Grizzly told him that he had attempted to go straight but people wouldn't stop laughing at him. Seeing that all Markham wanted was to boost his ego, Spidey pretended that his back was broken in the fight and threw him off the train and into a river. Later, Markham was pleased with himself, believing that he had killed his enemy. (Web of Spider-Man #58)

Never the brightest bulb, it took several more years for the Grizzly to act on the fact that Spider-Man was still alive. Markham put a group of super criminals together, the Spider-Man Revenge Squad. The Kangaroo (Hibbs) was recruited after Markham found him webbed to a light-post, his costume torn away and wearing nothing but his underwear. (Spectacular Spider-Man #244)

Back at Grizzly's hideout (his apartment), Hibbs was less than impressed with his life philosophy of "The bigger the humiliation, the greater the revenge." After Hibbs called Markham a loser, he was threatened to be kicked back to Australia by Martin Blank, the Gibbon. Hibbs was glad that at least the Spot hadn't joined the Revenge Squad, when the Spot showed up. (Spectacular Spider-Man #245)

"The Legion of Losers!"

They were soon robbing a bank vault after arriving in one of the Spot's dimensional portals. Grizzly was only interested in defeating the web head and left in disgust after Spot told him that he had done a fine job of humiliating himself over the years, without Spider-Man's help. Unfortunately, he and Gibbon left through the bank vault door and set off the alarm. The police soon arrived and Grizzly was sure that he and Gibbon could take them without any trouble. The duo was soon running down the street as the police shot at them and they found shelter in a basement. Spider-Man found them there and Grizzly took a swing at him...and his fist got stuck in a wall. Spot and Kangaroo then arrived in one of the portals and Gibbon knocked Spidey out. Back at the apartment, the group began to bicker about what to do with the wall crawler. Kangaroo knocked himself out and Grizzly and Gibbon defeated the Spot. Spidey had really been conscious the whole time and agreed to let Blank and Markham go free if they stayed out of trouble. (Spectacular Spider-Man #246)

Soon Gibbon and Grizzly were super heroes, patrolling the streets in the BearMobile (Markham's old station wagon, pimped out by Martin Blank.) Deciding to see how fast the BearMobile could go, Markham put it in high gear and drove it off a pier and into a river. He had mistakenly believed that the car had aqua-gear. (Spectacular Spider-Man #252)

The car was towed away when they couldn't afford to pay the tow driver but they moved past that minor detail when an explosion at a nearby bank caught their attention. The robbery was being lead by the White Rabbit and her gang. (Spectacular Spider-Man #253)

"Through the Looking Glass!"

The team was taken captive by the Rabbit's gang and held for a $1 billion ransom. If the mayor didn't pay, the crime fighters would be dropped into a pit of genetically engineered killer rabbits. Dangling over the pit, Grizzly attempted to reach his utility belt, until Gibbon reminded him that he never had a utility belt. The mayor soon gave a counter offer to the White Rabbit of $2.50. (Gibbon remarked that it wasn't so bad, at $1.25 each. Grizzly told him to shut up.) Enraged, the White Rabbit ordered them lowered into the pit but the Gibbon's natural affinity for animals convinced the rabbits to gnaw through the ropes instead of them. The team destroyed the White Rabbit's giant rabbit robot and the criminal herself. Gibbon advised Grizzly against hitting her but Markham insisted that if he didn't, he'd be called a sexist. As they left the hideout, Grizzly lectured the Bombastic Bag Man (Peter in a makeshift disguise) on what it takes to be a real crime fighter. (Spectacular Spider-Man #256)

After returning to crime, Markham sought legal advice from She-Hulk after being accused of a robbery at Madison Square Garden. He was acquitted after it was learned that he had been fighting Power Pack in New Jersey when the robbery was happening. Later, he was punched out by Starfox, who thought the Grizzly was there to attack She-Hulk. (She Hulk (Vol. 2) #6)

Max worked with Hammerhead for a time as an enforcer. He teamed with Boomerang, and had fangs made part of his costume. He supposedly paid for the new enhancement with his kid's college fund. (Underworld)

"Small Wake for a Tall Man"

Grizzly was one of the many criminals poisoned by the Punisher at the funeral of Stilt-Man. Luckily, medical attention arrived quickly and no lives were lost. (Punisher War Journal #4)

Markham was later kidnapped by Alyosha Kravinoff for his hunting pleasure. Criminals with animal themes (Tiger Shark, Rhino, Bushmaster, Kangaroo, Aargorn, Mongoose, Swarm, Mandrill, Dragon Man, Vulture and Frog Man) were taken to a derelict ship in the harbor and drugged to be aggressive. They were eventually saved when the Punisher arrived. (Punisher War Journal #13)

"Lo there shall come, this man...this Candidate!"

The Grizzly was beaten by Stephen Colbert when the fake pundit ran for the presidency. Markham was in a fight with Spider-Man after robbing a bank and Colbert, who is well known for his fear of bears, decided that Max was there to assassinate him. At the top of a brownstone, Colbert shoved a gargoyle onto the criminal below. (Amazing Spider-Man #573)

Grizzly briefly worked for Norman Osborn and the Thunderbolts. He debreifed the team about the Agents of Atlas before they attacked a chemical weapons plant in Louisiana. (Thunderbolts #139)

Markham later attacked Scott Lang in Miami, thinking he was Eric O'Grady. (Lang is the heroic Avenger, O'Grady is the criminal that betrayed him during the attack at the chemical weapon facility. They both call themselves Ant Man.) After the misunderstanding, he was offered a job in security by Lang. (Ant Man #2)

Markham joined Supervillains Anonymous and confessed how he hit rock bottom. He waited for drunks outside of bars and lured them into alleys with children's music and then rob them. He reasoned that drunks would be sentimental when they heard music that reminded them of their childhoods. In one such case, he took a guy's wallet, but only the cash. The victim was taped to a fire escape while Grizzly went to buy a pizza. Markham then returned with some leftovers to give to the robbery victim. He confessed that he was a coward and was too scared to commit larger crimes after the personality change in Spider-Man. After he let the drunk go free, he heard "Itsy Bitsy Spider" being played from a rooftop. When he reached the roof, he was ambushed by the Superior Spider-Man. Back in group therapy, the councilor tried to convince Grizzly that his fear of Spider-Man had held him back but he had survived the encounter with Spidey despite his fear. Markham was only briefly reassured. (The Superior Foes of Spider-Man #11).

Markham was taking part in group therapy with Freak, John Jameson, Man Bull, led by Misty Knight. He was tired of looking like an idiot that dressed up in a bear costume and got beaten up by Spider-Man. It was worse when he was beaten by Ant Man. Knight told him that he was doing good. She corrected herself, saying that it was good that he was getting it all out in therapy, not good that he was beaten by a guy that could be stopped by a rolled up newspaper. The session ended when Norman Osborn arrived. (Ravencroft #1)

Later, Markham was talking with Ringer about going straight. He was tired of endlessly being beaten up and put in jail. It got worse after everyone got cell phones. Every one of his defeats was on YouTube. He then saw that he was surrounded and Ringer told him that he was about to find out what happens to sellouts while in Ravencroft. (Ravencroft #2)

He was later seen in the medical ward, with a bandaged hand. He told Knight that it wasn't bad. The four guys that jumped him were worse off, especially the one in the full body cast. (Ravencroft #3)