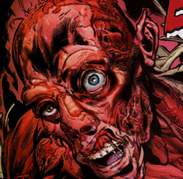 A once homeless drug addict, the man who was transformed into the monstrous Freak faults Spider-Man for causing his grotesque condition.

While attempting to steal the FEAST center's cash box, an unknown homeless vagrant soon found Spider-Man on his trail. After dumping the loot and shedding his webbed up clothes, the vagrant broke into the laboratories of Dr. Curt Connors. Mistaking the research lab for a methamphetamine lab, the vagrant injected himself with several vials filled with animal stem cell serum in an attempt to get high. Shortly after his exposure, Freak stumbled into an alley and his body formed an acidic chrysalis around him.

While inside the chrysalis, his body mutated into an aberrant new form. Soon after he emerged, Freak was shot by a police officer, causing him to fall into the sewer. While floating in the sewers below NYC, Freak's body formed another chrysalis. Emerging once again and this time immune to being shot with bullets, Freak went back out on to the streets and killed a hot dog vendor. Freak then set out to kill Spider-Man because he blamed him for creating his condition, so he began tracking Spidey via scent.

Freak's tracking of Spider-Man led him to a Randall Crowne campaign event, which Peter Parker was covering as a photographer. After seeing Freak amongst the crowd, Peter quickly changed into his Spider-Man costume and began battling the monster in front of hundreds of bystanders. In the midst of fighting Spider-Man, Freak gets a whiff of methamphetamine and immediately leaves Spidey so that he could get a fix. The web slinger tracks Freak to the meth lab and attempts to subdue him. The ensuing melee causes the lab to start on fire due to the flammable solvents therein. Freak refuses to leave the burning lab because he doesn't want to leave the drugs. As Spidey escapes, Freaks body goes up in flames and quickly becomes wrapped in yet another chrysalis. Freak then stays off-radar for a few days when an unexpected blizzard blows through NYC, the cold temperatures prevented his 'hatching' from the chrysalis.

After the blizzard passes and temperatures rise, the possibility of Freak's emergence becomes a more legitimate threat. Curt Connors and Spider-Man discuss Freak and realize that his acidic chrysalis could be destroyed using an alkali solid like quicklime. When Freak emerges from the burnt rubble, Spider-Man is there waiting for him. As the two trade blows, Dr. Connors arrives on the scene claiming to have drugs in the trunk of his car. The two fool Freak into ingesting large amounts of quicklime, which Freak mistook for drugs. The monster's body immediately wraps itself up into another chrysalis and Spidey covers the cocoon with quicklime. The chrysalis is then picked up by a Hazmat team that was covertly operated by Oscorp Enterprises.

When Norman Osborn and his Thunderbolt team arrive in NYC in an attempt to track down the Spider-Tracer killer, Freak is found to be in Norman's custody. Osborn exploits the monster by subjecting him to residue from Anti-Venom that nearly killed Mac Gargan. Freak then generates a super venom that Norman attempts to use on Anti-Venom. Freak has not been seen since and is presumed to be in the custody of Norman Osborn.