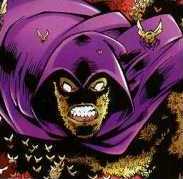 During the Second World War, Fritz von Meyer, an expert apiculturist (aka "bee guy") was working on weaponizing insect toxin. After the fall of the Third Reich, he fled to South America where he discovered an unusual hive of killer bees. Meteorites had fallen in the area and their radiation mutated the bees, increasing their aggressiveness and giving them a collective intelligence. He hoped to control them, using the bees to create an insect army. His machine failed and the angry insects killed him. However, his consciousness was absorbed by the hive and the swarm formed a body around his skeleton. He had control of the queen bee, forcing the rest of the hive to obey him.

He soon arrived in Los Angeles with the hopes of breeding the queen to create millions of bees that would be under his command. The mutated queen grew to an enormous size and von Meyer instructed the rest of the hive to protect her. However, Swarm was defeated by The Champions when Hercules threw the queen out to sea and the hive followed her. Von Meyer's skeleton was abandoned. (Champions #14 & #15)

Swarm's skeleton was sent to Empire State University to be researched by Dr. Morris Sloan, a professor of entomology. He hoped that there was a trace amount of radiation contaminating the skeleton, which could be used to control less aggressive bees for agricultural purposes. When Dr. Sloan activated his machine, he awoke a new queen bee that had been hibernating in von Meyer's skull. The queen started reproducing immediately, producing millions of bees that contained the consciousness of Swarm. Soon the new swarm was flooding the hallways of Empire State University. Peter Parker just happened to be starting his graduate school career and soon arrived in Dr. Sloan's lab as Spider-Man. He webbed Swarm into a corner of the room and helped the professor escape out a window, promising to keep von Meyer from escaping. The bees quickly ate through the webbing and attacked the wall crawler. (Peter Parker, Spectacular Spider-Man #36)

Spidey tried desperately to minimize the stings he suffered by rolling on the floor to crush the bees, but they kept stinging after death. Swarm commented that Spidey's "spiderness" was enraging to the bees, as spiders and bees are natural enemies. Spider-Man tried to cover himself in webbing as a cover but the insects again chewed through the substance. In his near panic, Spider-Man smashed a lab setting of Dr. Sloans, covering him in a chemical that drove the bees away. Swarm fled as campus security fired at him, their bullets passing through him harmlessly. Peter changed out of his costume just in time before passing out from his numerous stings.

When he awoke, he was surrounded by classmates (Marcy Kane, Philip Chang, Chip Martin and Steve Hopkins) and Dr. Sloan, who informed him that no one had been killed but that Swarm had begun building a gigantic hive on campus. The Avengers and Fantastic Four never arrived as Peter had hoped, leaving the students to try and stop the threat themselves. Marcy suggested the new insect repellant that she had created and the group got to work. Peter knew that no one could get close enough to the hive safely and use the chemical, but he was too anxious to face Swarm again. His classmates went to deliver the repellant themselves, so Peter soaked his costume in the chemical and went into action. He also mixed his web fluid with the chemical.

The bees attacked Peter's classmates before they could use the repellant, but the soaked costume drove the insects away long enough for Spidey to smash into the unfinished hive. The queen was nearly ready to breed and Spidey sprayed his poisonous webbing on the bees, causing them to attack each other. Swarm could feel their agony as his own. Spidey's poison soaked costume also hurt whenever he came into contact with von Meyer. He eventually tossed the creature next to the queen and covered them with the webbing, causing the swarm to attack them both. What bees remained fled the hive. (Peter Parker, Spectacular Spider-Man #37)

Von Meyer has been a pain in the sides of many super heroes, from Iceman and Firestar to Spider-Man and The Champions of Los Angeles. He teamed with Kraven the Hunter while taking on Firestar and Iceman. (Secret Defender #19 and #20)

Swarm briefly appeared during a brawl between Spider-Man, Doctor Octopus, The Answer, Beetle, Hardshell, Rhino, Strikeback, Stegron, Boomerang and the Vulture. Swarm was captive in a nearby laboratory's container, which was carelessly damaged by Octopus's tentacles as he fled the scene, which allowed von Meyer to escape. When he arrived on the scene, Spider-Man and Octavius had been incapacitated by an atomic blaster. This allowed him to send his bees at the webhead as the other combatants were distracted. (Lethal Foes of Spider-Man #3)

Spidey came to as the bees began to sting and quickly realized that they were behaving in too organized a manner for it to be a natural swarm. He leaped over to the Rhino to use him as a shield against the bees and hoped to take back the blaster from him as well. The blaster accidentally discharged and the explosion disrupted the psychic link between Von Meyer and the bees. (Lethal Foes of Spider-Man #4)

While committed to Ravencroft asylum, he was released from his cell by Spidercide, along with the Scorpion, Mister Hyde, Chameleon, Typhoid Mary, Mysterio, and Shriek. (Ben Reilly: Spider-Man #4)

Swarm had snuck behind Spider-Man, whom was saved by Vermin. Spider-Man created a web sheild to keep the bees away but Vermin tore through it and yanked Von Meyer's skeleton from the swarm. Swarm would regroup eventually but he was out for the moment. (Ben Reilly: Spider-Man #5)

While hiding out in South America, von Meyer's psychic connection to his bees was severed by the psyonic blast created by a battle between New York's super heroes and the entity known as Onslaught. He traveled to New York to find the source of the blast, but instead found a device that he believed could let him control every bee on the planet. The Institute of Seismoharmonic Studies was soon covered in a hive, which drew the attention of Ben Reilly, who was Spider-Man at the time. After helping some people that had been effected by the enormous swarm of bees that arrived in New York, Spidey arrived at the hive. (Sensational Spider-Man #9)

He quickly found that the bees remembered him (or Peter, as it were) and were afraid of him. They let him enter the research institute and the scientists inside helped Ben disrupt the bees ability to fly. They created a psyonic pulse that broke von Meyer's psychic connection to the bees. In the end, the scientists thanked Spider-Man, much to the irritation of J. Jonah Jameson. (Sensational Spider-Man #10)

After Peter unmasked as part of the Superhuman Registration Act, many of his enemies began attacking him and his family. The Chameleon was one example, and he employed Electro, Molten Man, Scarecrow and Will O'the Wisp to attack Liz Osborn and Normie Osborn. Swarm was sent to kill Mary Jane. He attacked her during a rehearsal for a play and was beaten when she hit the sprinkler system, as the water weighed the bees down. The skeleton tried to kill her by itself, but it was smacked by a stage hand. They fled, as the bees were quickly regathering. MJ and the crew were soon safely at a hospital being treated for stings. (Sensational Spider-Man vol 2 #30)

Von Meyer and other animal themed criminals were kidnapped by Alyosha Kravinoff and used for his hunting pleasure. The captives were held on a derelict ship and exposed to gas that increased their aggression. He escaped after Kraven battled the Punisher. (Punisher War Journal #13 - #15)

He wasn't so lucky after battling the Thunderbolts. After incorporating enough bees to grow over twenty feet tall, he battled the incarcerated bad guys, who were assigned to bring him in as per the Superhuman Registration Act. Von Meyer managed to hold off Radioactive Man's attempts to break his psychic connection to the bees, until team leader Norman Osborn noticed that von Meyer's skeleton was vulnerable. Mac Gargan (Venom III) was then sent to finish him, which he accomplished by eating the skeleton. Norman expected it to be a minor setback for Swarm. (Thunderbolts #122)

Swarm eventually returned (and how his skeleton managed to escape from Gargan's digestive system, I hope to never know) in Buenos Aires, Argentina. He managed to control his bees as avatars and took on the Avengers. Stature disrupted von Meyer's connection to the queen bees and thus to the rest of the swarm. (Mighty Avengers #24)