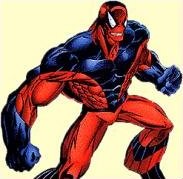 When Ben Reilly and Kaine returned to NY, a third Peter Parker clone surfaced. He wandered the streets amnesiac, doing a few good deeds. Eventually his latent memories were triggered, and he came to believe that he was the real Peter Parker, prisoner of the Jackal for 5 years. Facing with Ben and Peter, and learning that Kaine has Mary-Jane, he sets off alone to find her, followed by the slightly more cooperative duo. During the battle with Kaine, he revealed his true nature: he was intent on killing the other three. His body had been mutated by the Jackal, and in the madness of his denial of being a clone despite all the evidence against him, his body grew to giant proportions. He was presumed dead after an explosion, and Kaine fled to fight another day.

Returning to the Jackal, the clone was told that he was really a clone, and was enabled to control his mutating powers. Becoming Spidercide, he fought his brethren again, nearly killing Kaine (the Jackal, of all people, healed Kaine's injured body). In the end, Spidercide aligned with Scrier, an agent of Norman Osborn (fact unknown at the time -- we just knew Scrier had an agenda) and betrayed the Jackal. He tried to kill his creator, but he failed, and fell from the top of the Daily Bugle in the process.

When the NYPD arrived, they couldn't be sure if he was really dead, because Spidercide's body had become a quasi-liquid blob. They took him into custody nonetheless. His status is unknown, and he was never seen since. He probably never will.

The "next big thing" comes in cycles. Venom was the "dark Spider-Man". But Venom was cool. They wanted to sell Venom books, and they wanted to create more "Venoms" to get more money. Enter Carnage, designed to make Venom a not-so-bad-guy. Kaine was the new dark Spider-Man. But Kaine was cool. They wanted... eh, you see where I'm going with this. Enter Spidercide. Unfortunately for Marvel, people didn't react to clones as well as they did to symbiotes.