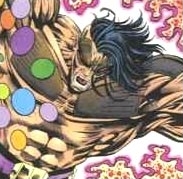 When the Jackal and Spidercide released the Carrion Virus on the town of Springdale, Pennsylvania, there were no survivors. None except for one. Rafael Carago was discovered by the Center for Disease Control, but his skin became too hard for them to sedate him and he escaped their custody. The New Warriors and the Scarlet Spider were able to subdue the rampaging Rafael, now codenamed Helix, and turned over to agents of Project: Pegasus. But, the Jackal learned of the survivor and Spidercide had replaced one of the agents in order to kidnap Helix.

The Jackal conducted further experiments on Helix, mutating him further but unable to learn how his adaptoid powers developed. During a clone revolt in the labs, Helix was able to escape. Helix was now loose in Manhattan, fighting hallucinations of Spidercide and the Jackal. Once again, the New Warriors and the Scarlet Spider reunited to take Helix down and incarcerate him at their Crash-Pad HQ.

While there, Helix regained his mental stability, although with a case of amnesia, and became a guest of the team. He began to speak (albeit in Spanish) and was able to gradually become part of the group, aiding them in various adventures. Turbo had take it upon herself to teach Helix English during is stay with them. However, Helix soon had a desire to rediscover his identity and his past and left the team. His whereabouts are currently unknown.