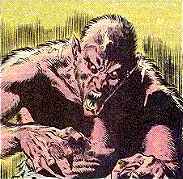 Edward Whelan was sexually molested by his father as a child. He repressed those memories, burying them deep within his conscious mind, unaware it ever happened. He moved on with his life, and became a successful researcher in the field of Genetics. By the age of 31, he went to Mexico to work with Arnim Zola, a reference in that field, and a major baddie in Marvel Universe. When he tried to oppose the use of human test subjects in Zola's experiments, Baron Zemo II, Zola's employer, decided he should be used as a test subject as well. The combination of his childhood trauma and Zola's process created Vermin, a cannibal humanoid rat, with a strong sense of self-preservation, feral instincts and a child's mind (thus, very naive and manipulable). He often argues with himself, to try to overcome his fear of light, pain, and Spider-Man (who hurt him - well, in fact it was Kraven dressed as Spider-Man fought him, but he firmly believes it was Spider-Man).

Zola and Zemo used Vermin to destroy Captain America, their mutual enemy. We don't need to read that story to know he failed, as Captain America is still alive. Vermin went on the loose and he fought Spider-Man and Captain America on his second outing. Spidey couldn't have defeated him without Cap's help. This laid the groundwork for an epic to come.

In Kraven's Last Hunt, Kraven finally "killed" Spider-Man. He buried him, and decided that to prove himself Spider-Man's superior, he had to sucessfully replace him, wearing the costume and defeating someone Spidey couldn't by himself. Sergei sets out to find Vermin, a foe that Spider-Man hadn't beaten without help from Captain America. Vermin had been out prowling the streets for food, and tried to make a meal of police officer Angela Cairn's partner. In that regard, Kraven acted as a hero: stopping a cannibal from walking the streets of New York. His fight against Vermin is great, and in the end, the hunter overcomes the animal. When Spider-Man leaves his grave, Kraven releases Vermin, and kills himself while Spidey searches for Vermin. Spidey's battle against Vermin is also great, and in the end, Spidey finally overcomes him alone.

Since then Vermin is under treatment by Dr. Ashley Kafka. She's the one who discovers his father's abuse but Vermin proves to be a tough guy to contain, and despite the occasional display of his docile Edward persona, Vermin escapes. This time he joins a three way battle with Spider-Man and Green Goblin II (Harry Osborn), who just decided to avenge the original by killing Spidey. During this story, (The Child Within) Vermin confronts his parents, the father for the abuse, and the mother for allowing it, and is unable to kill his father, showing that the Edward persona is gaining influence. When Spidey shows up, the Vermin persona comes to full bore and he attacks Spidey. In the end, Spidey saves him from being killed by the police, and he's returned to treatment. Dr. Kafka manages to see a physical transformation for the first time, when temporarily Vermin's face becomes Edward's.

J.M. DeMatteis really loved Vermin, so he brings him back 10 months after the previous story. Edward's treatment is going well, and he only becomes Vermin in 12~15 hour intervals. Vermin is being successfully removed from Edward's subconscious. But as nothing ever goes well, Zemo's mutations invade the university and kidnap both Edward and Dr. Kafka. The monsters took them to an underground place, where Edward panicked, afraid that Zemo would repeat his experiments, and became Vermin once again. It turns out that the monsters were as human as Edward, and that they had escaped from Zemo's control. They went for Vermin to make him their leader. He accepts, despite Kafka's objections. He took the mutations to the surface for food, where they meet Spidey. He beats Vermin, who turns back into Edward, but they're overwhelmed by the numerous mutations, and captured. In the hideout, Edward gains the mutations trust, and convinces them that Spidey and Dr. Kafka can help them too. He and their previous leader shake hands, but Zemo arrives and kills him (the previous leader). He also turned Edward back into Vermin and assumed mind control over all of his creations. They capture Spidey, but Vermin overcomes the mind control and tries to kill Zemo. Kafka talks him out of it, and he definitely kills his Vermin persona. The mutations are taken to Reed Richards, Edward becomes Kafka's assistant and Matthew Murdock agrees to defend him in court.

Later, in the beginning of the Clone Saga, all of the insane criminals had been transferred to the Maximum Security Institute for the Insane Criminals. They were under Dr. Kafka's supervision, and John Jameson's security when the all-powerful Judas Traveller turned Edward into Vermin, during a trial of Peter Parker. Carnage acted as the prosecutor and Kaine as the defense. Parker was found guilty by the jury of criminals (including Shriek, Chameleon, Vermin and Carrion II) but they were beaten by Kaine and sent back to prison by Traveller.

Later still, in Wolverine Annual 2001, Edward is retrieved from Ravencroft by Bloodscream to fight Wolverine, then he allies with Wolverine and they both beat Bloodscream. In Marvel Knights #14-15, the Punisher uses Vermin to track down Daredevil.

Edward was still in his Vermin form after being captured by the Puma, which explains how he was still the rat when he next encountered Spider-Man. Peter's roommate had been kidnapped by a female Kraven and taken into the sewers. She had assumed Vin was Spider-Man when she found the costume in his apartment, which she took as evidence. Without a disguise, Peter borrowed Daredevil's costume and set out looking for Vinny. Scared and desperate after encountering the new Kraven, Vermin more than matched Spider-Devil as he entered the sewers. Spidey managed to web up Vermin and get information regarding Kraven and Vin's location.

Vermin came upon Spider-Devil and Vin battling Ana Kravinoff and provided the distraction needed for them to escape. While her target had gotten away, Ana did capture Vermin and took him back to the Kravinoff mansion. His status since then is unknown.