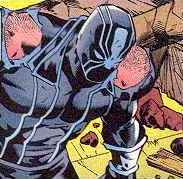 There were two events that made people get away from the Spider-Books in the late 90's: the Clone Saga and the Reboot. The Black Tarantula came in the year- and-a-half between them. He was big, tough, but Tom DeFalco built him up for too long, sometimes with contradicting clues. The dragged out gang war between B.T. and the third Rose (Jacob Conover), with Don Fortunato (the new big boss) caught in the middle could have been much better if it had been developed more swiftly and smoothly.

BT was a mysterious and powerful crime lord in South America, who decided to expand his sphere of influence to the Big Apple. He decided to take over the aforementioned Rose's territory, and sent his loyal killer El Uno to inflict casualties among his organization. Unfortunately for El Uno, he met Delilah, Rose's loyal killer, with whom he had a fight that was probably the highest peak of the whole storyline (great issue, Amazing #420), and that ended with his head being mailed to BT, with compliments of the Rose.

The gang war heated up, and BT moved to New York, to deal with the problems personally, and to take care of some personal business. The war proceeded with both the men summoning villain after villain (mostly lame ones) to take care of the other, with the highlights being a re-empowered Electro and a revived Dr. Octopus, both of them returned to the simple "I want to kill Spider- Man" mood.

On and on, B.T. put a contract on Robbie Robertson, to be delivered by Meiko Yin, but Spidey saved him. Ninja filled the pages, Elektra and X-Man guest-starred, and the war became tedious. BT gained advantage, he broke Delilah's neck, only to heal her and let her live, and he gave Spidey a very big beating, taking his mask and leaving him alive too. Finally, as the Rose cowered to Don Fortunato's mansion asking for help, B.T. went there also, to take care of the personal business. This brings us to BT's origin.

For the last 700 years, the power and the position as the Black Tarantula has passed from father to progenitor son in the family of Carlos LaMuerto. Recently, he married a young woman, Marina Caches (MJ's friend), who escaped with their young boy when she discovered that Carlos' family business were crime-related. Ironically, her new boyfriend is Dante Rigoletto, nephew of Don Fortunato, also a prominent member of organized crime. He takes her to the mansion for protection, but when B.T. arrives, neither the Hydra troops (allies of Fortunato) nor Spider-Man can stop his rampage. He wants to take his son back, to instill on him his legacy. He changes his mind when Spidey prevents the Rose from shooting him in the back, although he was so battered that by saving B.T.'s life he was ensuring his defeat, and when Marina reminds him of what he felt when his father did the same to him. With a promise to return eventually, BT leaves, with Marina and the little Fabian finally able to have some peace. Oh, and no revealed connection to Robbie, his "old colleague".

Black Tarantula ended up in jail, only to take Daredevil as an enemy once he got out.