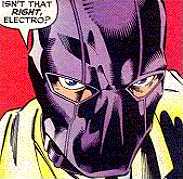 Well, Marvel finally brought back the Rose as a thinking villain, after that laughable attempt with Blood Rose. As revealed in Amazing Spider-Man Flashback, Where Have All The Heroes Gone?, Jacob Conover had saved Don Fortunato's life, long, long ago, 3 years B.R.S. (before radioactive spider). In the future, Jacob Conover would become a reporter for the Bugle. Years later, facing financial problems, he went back to Fortunato, to cash in his debt of gratitude. The mobster made him the new Rose, and gave him some of the original Rose's territory, part of his own territory.

During the Onslaught, the Bugle's building was damaged, and the financial loss forced some personal cut-down. Jacob (like Peter and Phil Urich by the way) were among the dismissed people (hmmm... new policy: fire everyone who has a secret identity).

Resenting being fired, Jake built some hatred towards JJJ and Robbie Robertson. He gave journalism classes at E.S.U. until Norman Osborn took over the Bugle. At that point he was re-hired, and showed his new annoying personality whenever he appeared. In his Rose business, things were going quite well until the South American crimelord known as the Black Tarantula came to New York, "for some personal business". He first tried to take some of the Rose's territory, and Conover replied with his trained assassin Delilah, and with a re-empowered Electro.

Things didn't work as he wanted though, and he was captured by Spider-Man after a Spidey versus Black Tarantula battle, in Fortunato's mansion, and with Mary Jane (don't ask, check the review of Amazing Spider-Man #436), Fortunato, BT's ex-wife, her new boyfriend (nephew of Fortunato) and BT's kid (the "personal business"). Conover was ready to shoot the entire room, starting with BT (who wasn't seeing him) then Fortunato, and then everyone else (to kill all witnesses) when Spidey webbed him up.