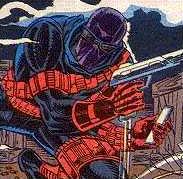 Richard Fisk has a past history as the Schemer and the original Rose, check out those profiles for more backstory. Continue to Blood Rose.

In a very poor story, The Name Of The Rose, happening during the fall of the Kingpin, people acted way out of character. This ended up with Richard Fisk becoming the new Kingpin, killing his associate, Rose II, and being shot to an apparent death in the Hudson River by "an old friend", who prevented him from becoming what he despised so much in the past.

Someone must have told Terry Kavanaugh that Richard Fisk was written way out of character, so he should ret-con it, or he just had the breaking idea that would rock the readers: what if Richard wasn't Richard?

In the storyarc My Enemy's Enemy (Web of Spider-Man #97-100): Blood Rose kills people from Fisk's organization. Kingpin II, the Richard Fisk that was shot by Blood Rose washes up on a deserted island. He flashbacks how he got there, and who saved his life. He's found by a guy named Trench, who trains him back to fitness. He steals a glove from Trench's hut, that turns out to be superpowered. He returns to NY, with Trench on his tail, wearing the rest of the uniform. He is... NightWatch! Well, Kavanaugh tried to create Marvel's version of Spawn here. It didn't work. Oh, and Kingpin II changed his name to Gauntlet. Cool... not.

Meanwhile, Blood Rose kills some more people, kills the Foreigner, except that it wasn't the real Foreigner, just a stand in and that he wasn't really dead, cause Spidey took him to the hospital, where Blood Rose definitely kills him. Spidey goes out to find the Rose, and he meets the New Enforcers: Plant-Man, Eel, Tangle, Vanisher, Super-Adaptoid, Man-Dragon, Dreadnaught, and some more I can't remember. Losers. Oh, and Web of Spider-Man #99 ends with a "shocking revelation": Blood Rose is tending to his roses, and he realises he must be careful, otherwise he'll be addicted to that like the original Rose. Then he removes the mask, revealing himself to be... Richard Fisk.

Apart from the obvious problems with this revelation, one thing bothers me to the extreme, and another shows sheer stupidity: First, the greenhouse was only meant to help in the disguise... WHAT? He has no henchmen, so who'll see the greenhouse and think of his disguise? Besides, if I wanted to kill the Rose, I'd certainly look for him in a greenhouse! How is a greenhouse supposed to help? And the second is, why is Fisk worried that he'll like tending to plants as much as the original Rose, if he was the original Rose???

The bombastic issue Web of Spider-Man #100, of a title that deserved better: Spidey fights Enforcers, Gauntlet searches Blood Rose's hideouts, NightWatch stops a mugging, and his cloak is following the stolen glove. Peter makes a Spider-Armor. Blood Rose fights the New Enforcers in their ground, and is captured. Steel-Spider arrives, and starts K.O'ing some Enforcers, Gauntlet arrives. Gauntlet is Alfredo, Richard's old friend. He had plastic sugery done on himself and took Richard's place in Kingpin's organization. Why? I don't know! Well, I do know Marvel didn't want Richard Fisk's character destroyed, so they ret-conned and Alfredo was expendable. Bottomline: Nightwatch arrives, Spidey loses armor, Spidey takes out Enforcers, NightWatch and Gauntlet K.O. each other, and Spidey catches Blood Rose. The police takes everyone away, and the Inner Circle of the New Enforcers plots in the shadows, never to be seen again...

There's some things I can't seem to find in the comics, but other people refer to them as true events: The real Richard entered the Witness Protection Program, and the ruse that he uses when he swiched places with Alfredo was because Alfredo had better combat skills, so he could impress the Kingpin better. That doesn't make any sense, because of Blood Rose's actions. If he could run around killing dozens of goons, he'd sure as hell be ready enough to impress his father.

Since this story, Richard disappeared for long time until recently in the DareDevil comics, where he suddenly reappeared, out of prison, and with no explanation given. Perhaps someone decided to forget Mackie's piece of trash and Kavanaugh's even worse ret-con ever existed, relegating them to the abyss where stories like Facade and Chapter One reside... the Oblivion. Anyway, check Rose's profile to know the circunstances of Richard's death.