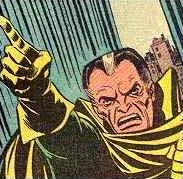 Richard Fisk was a happy and industrious student going to an exclusive school in the Swiss Alps. He was very proud of his successful and respected father and he trained himself mentally and physically in order to earn his father's love. Then, one day he learned that his father was really the infamous Kingpin of Crime and his whole world crumbled around him. Dejected and dazed by the news, he took a ski lift alone to the top of a mountain and disappeared, never to be found and believed to be dead.

But Richard was actually carrying out a plan. Using the money his father had given him, he makes his way back to New York, builds a fancy car and special weapons and hires his own mob. He also designs a nifty green costume with a high yellow collar and makes a mask that, when worn, makes him look like a scowling middle-aged man who has a white streak in his hair and who sweats a lot. He calls himself the Schemer and, in revenge for his heartbreak, sets out to get back at his dad.

The gang war between the Schemer and the Kingpin draws Spider-Man into the action. Eventually, however, it comes down to father and son, face to face. When the Schemer removes his mask to reveal himself, the Kingpin is so shocked by the realization that his son hates him that he falls into a catatonic state. As soon as this happens, Richard realizes that he never really meant to hurt his father. He atones for the harm he has caused by joining the terrorist organization called Hydra where he rises to the rank of Supreme Hydra. Once in charge, he uses Hydra's great resources to cure his father. Unbeknownst to the rest of Hydra, the Kingpin assumes control.

But unbeknownst to the Kingpin, the Red Skull is really the one in charge. In order to fight the Skull's attempt to resurrect Nazism, the Kingpin and Richard aid Captain America and the Falcon. When the smoke of the battle clears, Richard lies near death. The Kingpin keeps his son in suspended animation until he can steal the life force from Spider-Man to resuscitate him. Sometime thereafter, Richard Fisk becomes the crime-boss known as The Rose, and later dons a third identity as the Blood Rose. Check The Rose's profile to know the circunstances of Richard's death.