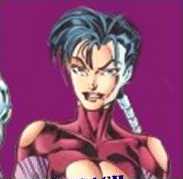 Delilah was a highly skilled assassin who came under the employ of the new Rose (Jacob Conover) during one of the many crime-boss gang wars. She first came into conflict with Spider-Man when she attempted to assassinate the husband of his employer Shirley (this was during the time Ben Reilly was Spider-Man.)

When the Black Tarantula first involved himself in the gang war, Delilah attempted to kill his super-strong henchman El Uno but was overwhelmed by his power. The rematch, though, was a firm win for Delilah, with El Uno's head being mailed back to the Black Tarantula.

Delilah and the Rose next sought to remove Spider-Man from interfering in their operations, and so undertook the project of repowering Electro, hoping he would eliminate Spider-Man. Electro failed, and so they devised a new plan. This time, they stole the corpse of Doctor Octopus and succeeded in restoring him to life.

While Spider-Man was thus occupied, Delilah found herself ambushed by the Black Tarantula, who easily subdued her and broke her neck, inflicting fatal injuries. Before she could die, however, the Black Tarantula then instantly healed her with a message of warning for the Rose.

Attempting to find help to bring down the Black Tarantula, Delilah enlisted the aid of the new costumed adventurer Ricochet (actually Spider-Man in disguise). Together they tackled two of the Black Tarantula's operatives, Roughhouse and Bloodscream. Bloodscream grabbed hold of Delilah and caused her to bleed until she passed out. She was taken by the authorities to the hospital and is presumably still in police custody today.

Note: Check out the last two images in the Delilah snapshot gallery. We suspect we might have found the real first appearance of the Deadly Delilah. Reading through our back issues, we came across Marvel Team-Up #102 featuring Doc Samson & the Rhino. In that issue, we seem an acquaintance of Doc Samson named Dr. Delia Childress who could very well be her!

She speaks out about Gamma radiation, she has a brace on her right leg. Delilah could be the product of the power broker or something to that effect. As Doc Samson says to her, Delilah could be her nickname. Guess we'll probably never know since the Spidey creators would probably never touch on something so insignificant. But check the pics, and you can judge for yourself.