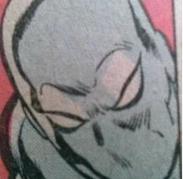 It was by happenstance that Puerto Rican born Hector Ayala came upon three jade amulets that belonged to the famous martial artists known as the Sons of the Tiger. When the Sons decided to disband, they tossed their powerful amulets into a back alley where a young Ayala came across them. When Hector placed all three amulets around his neck at the same time, he mystically transformed into the super powered hero known as the White Tiger.

Ayala's adventures as the White Tiger soon intersected with Peter Parker's escapades as Spider-Man after Hector enrolled at Empire State University. Pete and Hector first met during a student protest directed at the university's president. President Dwyer was planning on cancelling ESU's night school program because of a lack of funding. After an interesting turn of events that featured such off-beat characters as Blackbyrd, The Black Hand gang and a White Tiger impersonator, Hector and Spider-Man ended up engaging in an epic brawl. After fighting on top of a library, on top of a moving truck and eventually into the Bronx, Spidey realized that the working class crowd that began to gather around them were rooting for his adversary. Eventually, Spider-Man figured out that the White Tiger had been set up and the two super-powered amigos made up and shook hands.

A short time later, Ayala met fellow ESU student Holly Gillis, whom he instantly took a liking to. It didn't take long for the couple's relationship to turn cold though. After figuring out that Spider-Man was a student at Empire State, the super villain known as Lightmaster abducted Ayala thinking that he had finally deduced his enemy's identity. Once captured, Ayala announced on live television that he was not Spider-Man but instead the White Tiger. After Spidey and the Tiger defeated Lightmaster, Hector found that Holly was angry at her suitor for lying abut his superhero alter-ego.

The next adventure that Hector and Peter shared together may well have been their greatest team-up of all. After Peter's apartment was trashed by the Miles Warren clone calling himself Carrion, Hector offered his new friend a place to stay. While waiting to meet up with Peter at the school library, Ayala was ambushed and subsequently knocked unconscious by Carrion and his deadly red powder. Holly, who was coming to the library to apologize to Hector for the way that she had recently treated him, came upon Peter battling the macabre villain and soon found herself in harms way. After Peter saved Holly by pushing Carrion away from her, she drug Hector to safety and allowed Pete and Carrion to settle their quarrel alone. After Ayala regained consciousness, he decided to keep an eye on Peter, believing his friend to be in over his head.

The next day, while watching Peter's movements from the top of an on-campus building, the White Tiger was attacked by Carrion's gun-wielding henchman known as Darter. During their tussle, Darter and the Tiger eventually fell through the skylight of the campus gym where Carrion and Spider-Man also happened to be fighting. After disposing of Darter, our Hispanic hero quickly came to the aid of a reeling Spider-Man. The White Tiger unwisely let his guard down during the fight with Carrion though and was kicked to the bottom of an empty swimming pool. This gave Carrion a chance to capture the wall-crawler and take him to his secret lab - which a recovered White Tiger eventually sought out and found. Once the Tiger entered Carrion's laboratory, he found that Darter had been killed and Spider-Man was being kept busy by a giant squid-like Spider Amoeba. Ayala confronted Carrion but was easily swatted away, causing Ayala to unwittingly knock over the villain's clone casket which in turn started a fire. The growing blaze ended up consuming the entire lab and, after Spider-Man defeated the amoeba and Carrion, took the clone's life as well.

Not long after the Carrion ordeal, the despicable acts of a man named Gideon Mace turned Ayala's life upside down. One evening, Hector came home to the unimaginable sight of his parents and older sister murdered. Ayala let the thirst for revenge consume him and, with the help of his private eye friend Blackbyrd, searched the streets for clues so that he could quince it. The White Tiger eventually found Mace in a warehouse in the South Bronx, but failed to realize that his enemy had nearly an entire army at his disposal. After being fooled into trying to climb out of a fake window, Ayala found himself cornered and was gunned down by Mace. Mace then dumped Hector's bloodied body off in front of the Daily Bugle offices to serve as a message to other costumed heroes. A furious Spider-Man sought out and eventually made Mace pay for his crimes, but Ayala's near death experience convinced him to give up his White Tiger persona. Hector gave his amulets to Blackbyrd and, with Holly by his side, moved away from New York.

Death finally did catch up with Hector Ayala though. Years after his initial adventures as the White Tiger, Ayala again came into contact with his Tiger Amulets. One night after fighting with his new wife Soledad, the Tiger was arrested after being wrongly accused of killing a cop. Matt Murdock (who had previously teamed up with the Tiger as Daredevil) served as Ayala's counsel. During his day in court, Ayala lost his cool when being cross-examined by the District Attorney and the jury pronounced him guilty. After the verdict was reached, Hector freaked out, stole a bailiffs' gun and after fleeing the court room, he was shot down on the courthouse steps.