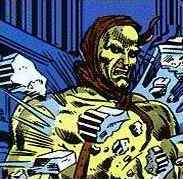 The creature that called itself Carrion first appeared before a council of the Maggia, led by the Masked Marauder. It claimed that it could kill Spider-Man for them but gave no specific reason why they should believe it. It still knew enough about their organization to be a threat, so Marauder called in his goons to get rid of the grotesque creature. The goons were soon overwhelmed by the thing's corrosive red dust, and their bullets passed through it harmlessly. Marauder again tried to get rid of Carrion by opening a trap door under it, but it floated away, leaving a stench of brimstone. (Peter Parker, The Spectacular Spider-Man #25)

Peter wasn't home and the women left, not knowing the danger that had been hiding from them. Carrion also left, floating out the window. (Peter Parker, The Spectacular Spider-Man #27)

Peter's landlady, Mrs. Muggins, heard noise coming from the apartment and went to investigate. Inside, she found the place torn apart, with the words "THE DEAD WALK PARKER" written on the wall. Peter arrived at the apartment as the police were looking around, and he was met by MJ, Betty, Flash Thompson and Hector Ayala. Hector offered Peter a place to stay and he gratefully accepted, knowing that Ayala was also the vigilante known as the White Tiger. If the mysterious intruder went after Peter again, he knew Hector could take care of himself. Peter and Hector agreed to meet that evening at the campus library but when Peter arrived he found Hector unconscious on the ground. The words "ASHES TO ASHES PARKER" were written in red dust across Ayala's body.

At that moment, Carrion knocked Peter and Hector off of the balcony sending them crashing to the ground. Carrion taunted Peter with his knowledge of his spider agility and speed, saying he was faster than he remembered. Peter was clueless as to who his assailant was but didn't bother holding back, as Carrion already knew who he was. Throwing an oak table at the villain was useless, as the creature had the ability to disintegrate all organic material. The fight drew the attention of Holly Gillis, who had come looking for Hector Ayala. Holy turned on the lights as she entered, which momentarily blinded Peter, who had been briefly blinded during a fight with Masked Marauder and Daredevil. Carrion used the distraction to grab Peter by the throat, threatening to prolong his agony. (Peter Parker, The Spectacular Spider-Man #28)

Carrion continued ranting at Peter, telling him that he was there for vengeance and that Peter had killed his friends. Peter managed to break free and warned Holly to take Hector and run. Carrion turned its attention to Holly and tried to kill her with his withering touch, but he was knocked aside by Peter. The fight went in Carrion's favor after he tossed his red dust in Peter's face. The substance was painful, but not lethal, Carrion told him as the creature began to vanish. Peter made one last jump at him, but crashed through the library windows. Carrion was later met by his servant, an undergraduate student at E.S.U. named Randy Vale. Carrion was hiding in the science building and Vale informed him that entrapping Peter would be easy. Carrion warned him to not get over confident, as there was much about Peter Parker that he didn't know.

White Tiger was soon following Peter everywhere he went. He was himself attacked by Carrion's henchman, a flying man with a gun called Darter. Tiger was momentarily stunned by Darter's attack, but was soon ready to prove that he is more formidable than Darter bargained for. Meanwhile, Carrion appeared before Peter and taunted him with the fact that he had been watching him without Peter's knowledge. Peter changed into Spider-Man and followed him to the gymnasium. During the fight, Carrion reminded Spider-Man that he had killed the creature's friends, despite Spidey protesting that he had never killed anyone. Carrion was then distracted when Darter and White Tiger crashed though the gym windows, giving Spidey the chance to grab him and force him to say who he had "killed." Carrion accused Spider-Man of murdering Gwen Stacy and Miles Warren. (Peter Parker, The Spectacular Spider-Man #29)

Spider-Man told him that the Green Goblin killed Gwen, not him. Carrion didn't accept that as the truth, and believed that Spider-Man killed Warren when the professor confronted the vigilante. Spidey reminded him that Miles Warren was the Jackal, and Carrion said that he used that identity to have his revenge for Gwen's death. Carrion threw more red dust at the wall crawler, missing but burning a hole through the gym's bleachers like acid. Spidey fled to the pool room, and was kicked away by Carrion, who teleported behind him. Spider-Man fell and grabbed a railing around the pool, but burned his fingers after his enemy stepped on his hand. Spider-Man fell into the pool, but launched himself back to the surface after hitting the bottom. He caught Carrion by surprise with a punch to the jaw and the creature fell into the pool itself. The water soon turned black and began to froth and boil before exploding into steam. Carrion stood at the pool's bottom and reminded Spider-Man that he repelled all organic material.

Soon, Darter was stumbling into Carrion after White Tiger dodged his attack. White Tiger attempted to help Spider-Man to his feet but was thrown into the empty pool by Carrion. The creature then threw drugged red dust into Spider-Man's face, causing him to pass out. Carrion carried Spider-Man to his lab hideout at the university science building, and tied him to a gurney. He slapped the hero awake and ripped his mask off, telling him "I am violent murder come back to haunt you! I am the dead--walking again! I am vengeance--hatred--your judge and your executioner!...I am the living clone of Professor Miles Warren!" (Peter Parker, The Spectacular Spider-Man #30)

Peter tried explaining that Warren was insane, and even realized it right before he died. Carrion denied that version of what happened and pointed out a vat of chemicals that he intended to use on Peter. The creature then told Peter how Warren had taken a cell from himself right before confronting Spider-Man for his intended final battle. That cell was placed into a cloning machine and grew into a human being, but as Warren never returned, the machine never released the clone. The clone continued to age into an old man, and died but the machine also kept it semi alive. Carrion was released from the machine by Randy Vale, who was unaware of the lab's secrets. Vale explained that professor Warren had been dead for months and Carrion realized what had happened. He demanded that Vale work for him and he would be given power. Refusal to help would result in death. The Darter identity was not the power that Carrion promised, but the power of Spider-Man. As Peter had been unconscious in the lab, Carrion had taken a blood sample from him and placed it in a cloning machine.

Carrion had decided that Vale was too small a man for that power but instead used it on a primitive amoeba-like creature. The creature would have spider powers, but without humanity. As the amoeba slithered out of its cage and began to cover the shackled Peter Parker, Darter arrived. Enraged that Carrion had given the power to a monster instead of him, he shot at his master with a gun Carrion provided. The shot missed after Carrion became intangible and the angry monster punished Darter with a face full of red dust. Vale died slowly, his face rotting away as he pleaded for mercy. A disgusted Peter escaped from the table after Darter's dropped gun destroyed the electrical current to the shackles. He intended to bring Carrion to justice, even if he was a dead man. Carrion promised to kill all of Peter's loved ones, starting with May Parker. As Spider-Man and Carrion traded blows, the spider amoeba pounced on him from the ceiling. White Tiger arrived and demanded that Carrion call off the monster, but he was thrown across the room for his effort. He collided with the clone casket, destroying it and starting a fire. White Tiger fled out a window and Spider-Man managed to throw the amoeba off of himself. The creature's killer instinct soon turned on Carrion, who expected to be saved by his intangibility and levitation. However, the fact that they were born from the same protoplasmic sludge made their abilities cancel out, and Carrion was dragged into the ravenous monster. His last act was to grasp at Randy Vale's skull and say that if he weren't dead, he could have saved Carrion. (Peter Parker, The Spectacular Spider-Man #31)