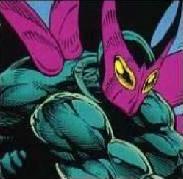 Abner Jenkins was a skilled factory mechanic. However, he had other plans, constructing a sticky-fingered battle suit with flight capabilities in order to become a master thief. During his first escapade with Spider-Man, Beetle had been released from prison and was plotting revenge against the Human Torch. Torch left his date to find Beetle, not knowing that the criminal was already watching him. Johnny went home, only to have Dorris yell at him for leaving her. Beetle listened outside and planned to use Dorris against Torch. Later, Dorris dropped her wallet while out shopping, which was found by Peter Parker. He took it to her address, where he was spotted by a jealous Johnny Storm. Storm later warned Peter to stay away from Dorris, which Betty Brant overheard, causing her to get jealous herself. After Torch left, Peter decided that if Storm hated Peter Parker spending time with his girlfriend, then he would really hate it if Spider-Man did. Beetle was observing the Home of Dorris Evans when Spider-Man arrived and Beetle attacked him.

Dorris called Johnny on the phone for help and he thought she was kidding. Spidey and Beetle then smashed through the front window of the house as Torch decided to visit Dorris anyway. Beetle escaped with Dorris and Spidey followed them. Soon after, Torch arrived at the house and found it in shambles, with webbing at the scene. He assumed Spider-Man took his girl friend and followed after the web swinger. Torch battled Spidey while he tried to explain that he was trying to save Dorris. They both eventually spotted Beetle, who let Dorris go so he could have both of his hands free. Spidey and Torch chased him to a condemned building where they apprehended him. Torch still wanted to get even with Spider-Man but the battle exhausted his flame and he couldn't pursue.

Beetle showed up at the wedding of Reed Richards and Sue Storm while he and many other criminals were under the control of Doctor Doom. Spider-Man was also at the wedding but didn't encounter Jenkins. Peter did, however, years later after Beetle broke into a store in the same neighborhood in Queens that Aunt May lived in. Two cops found him but he escaped, claiming that he had gotten what he wanted. This confused the police, who hadn't seen him take anything. Meanwhile, Aunt May is fussing over Peter, and left him to get some milk for her growing boy. Peter fell asleep and was woken up by Anna Watson, who tolf her that the Beetle had taken her hostage at the grocery store. At the grocery, Beetle say he broke into the store to get access to the vault in the store next to it. Spider-Man makes him drop May, who is just as frightened of him as she was of the Beetle. Spider-Man went back after the Beetle and they fell through a ceiling window and into a health spa pool. Spidey dumped him into the pool, where the heavy metal wings kept Jenkins struggling to keep from drowning. Spidey webbed him up.

At another time, Beetle coerced a small crime wave to divert attention away from the police precinct that he intended to rob. Spidey helped the police with the small time crooks then followed his spider sense back to the police station and found Beetle rummaging through police evidence. Jenkins found confiscated heroin, presumably planning to re-sell it and not for personal usage. Spider-Man stopped him with the help of officer Joey Macone. Such run-ins with Spider-Man and Daredevil convinced him that he needed power as well, resulting in a sleeker battle suit with more offensive capabilities and greater strength.

He joined the Sinister Syndicate, with members Rhino, Hydro-Man, Speed Demon and Boomerang. The Syndicate had been hired by the Jack O'Lantern to kill Silver Sable at Coney Island after she had rounded up his entire gang. Spider-Man went with her to the amusement park and they were promptly thrown around by the group. The commotion drew the attention of the Sandman, who was attempting to right his past wrongs. After the Syndicate was beaten, Sandman joined Silver Sable's team, the Wild Pack.

After getting out of prison, Jenkins was tricked into working for Wilson Fisk's right hand man, the Arranger. The lieutenant was already in very big trouble with his boss after the Lobo Brothers fiasco, a gang war that, naturally, was ended by Spider-Man. Arranger wanted to save his butt by having Beetle kill Spider-Man to keep Fisk from finding out about his involvement in the gang war. Jenkins immediately refused to accept the contract, refusing to deal with any more super heroes. Arranger instead hired him for a jewelry robbery, which Beetle suspiciously accepted. At the jewelry robbery, Spider-Man showed up making Beetle realize that Arranger set him up. Jenkins faked his death, then went after the Arranger after Spider-Man left. Beetle goes after the Arranger but is beaten by Spider-Man, who tells him that he doesn't know when to quit.

Beetle re-teamed with the Sinister Syndicate after Kingpin arranged to have him released from prison early. He gave Jenkins a choice: join Fisk Corp or die. Toughie. A new battle suit was created for him by the Tinkerer and Jenkins becomes head of the Syndicate. They head off to the Federal Reserve Bank and are met there by Spider-Man, who is defeated by the thugs. Boomerang and Beetle want to kill him, but Rhino says that if they do, he wont be able to get his hide removed if he is an accessory to murder. Beetle gets captured in the end and the Syndicate comes to break him out. Boomerang's girlfriend is the get-a-way driver, but she secretly plans to kill Jenkins in return for the death of her ex-husband, The Ringer.

Jenkins took on Ben Reilly shortly before the end of the Clone Saga. Beetle teamed with Shocker, Boomerang, Jack O'Lantern (Steven Levins) and Scorpia to capture the Spider-Man clone found in a demolished smoke stack. Spider-Man tried to keep the skeleton from them, out of fear that it could be used to discover his identity. Ben defeated the super powered thugs, while a de-powered Peter beat The Pro, a non powered assassin.

After a long and unsuccessful career, Jenkins even got to the point of wanting only distance from super-heroes. Following the events of Onslaught, when the Avengers, the Fantastic Four and many other heroes were seemingly dead, the people desperately needed heroes, and the Thunderbolts showed up. Formed by Baron Zemo, they were all super-villains, in different uniforms, posing as heroes to gain people's trust. After a while, some of them, including Jenkins, decided that the side of good was right after all, and some Thunderbolts truly became heroes. A woman named Leila Davies succeeded him as The Beetle, but she was ill-fated.

Jenkins upgraded his flight-armor several times, sometimes with the help of the Tinkerer. When he first joined Thunderbolts he was Mach-1. He is currently Mach-5. He also underwent the same kind of operation the Punisher once did, so he could become black and thus avoid recognition by the forces of law. Mach-1 teamed up with Spidey once, when he was still a disguised villain, and his inner dialogue was a riot. As Mach-3 he helped defeat the menace of Graviton, yet he and some teammates were exiled to Counter-Earth for a while. Abe was dating Songbird, who used to be Screaming Mimi.

It's unsure what will happen to these guys now that the heroic Thunderbolts have been disbanded, and the book's theme changed from a hero team of former-villains to a villain-fights-villain book. Abe decided to turn himself in and finish serving his his sentence. Some of the villainous Thunderbolts (the ones that didn't want to become heroes, such as Man- Killer), led by Zemo, were left planning world domination.