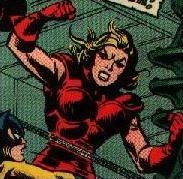 (Marvel Team Up I #8 (Flash-Back)) Katrina Louisa Van Horne had a promising future as a champion skier before she met another skier named Karl Lubbings, a violent anti-women's libber. Their argument over male and female superiority led to a skiing contest pitting his male ego to her female abilities. In order to defeat her and save face, he played a rough game by cutting her off on the course and accidentally knocking them both into a ravine. He was killed, but Katrina was left near death. Katrina soon learned her injuries would keep her from skiing again, and that her scars robbed her of her beauty. Scarred psychologically as well, she developed a severe hatred of all men. Her recovery was financed by a militant group of feminists who granted her an exo-skeleton that added to her strength and mobility.

(MTU#8) She debuted two years later as Man Killer in Chicago by assassinating a anti-women's lib politician. Clashing briefly with the Cat, she was next sent to take over New York City by knocking out the Harlem Power Plant, but the Cat enlisted Spiderman's help in defeating her. Man-Killer was, however, defeated emotionally by being forced to discover her exo-skeleton had been created by male AIM scientists.

(Daredevil #121- Behind the Scenes, 123) Man-Killer became enlisted in Silvermane's short-lived HYDRA faction in a base under New York City's Shea Stadium. Hearing how lawyer Franklin "Foggy" Nelson was being considered for a role in SHIELD's Directorial Council, Silvermane had him kidnapped in an attempt to destroy SHIELD from within. When Daredevil and the Black Widow came to the rescue, Man-Killer squared off with the Widow, but was defeated when Ivan Petrovitch forced her exo-skeleton to lock up on her.

(Marvel Team Up I #107) Presumably freed from prison by her militant supporters, Man-Killer aids them in abducting Hildy Dawes, a leftist underground revolutionist from California sent to New York City with lawyer Jennifer Walters to get a fair trial. Believing Dawes's support would bolster her female cause, Man-Killer clashed once more with Spiderman and with Walters as the She-Hulk. Blaming herself for the ensuing carnage, Dawes grabbed some high tension wires during an escape and electrocute herself and Man-Killer.

(Thunderbolts#18)- With the other Masters of Evil, fought the Thunderbolts after team-mate Cyclone led them into their trap; defeated MACH-1 (Beetle) in battle; with Crimson Cowl, offered the Thunderbolts an allegiance with them, with the threat that if they did not accept, they would inform all their enemies where to find them.

(Thunderbolts#19)- With Cyclone, Flying Tiger, Klaw and Tiger Shark, intercepted the Thunderbolts during their battle with Charcoal and the Imperial Forces, allowing them to escape; mentioned they would picking up newly-minted coins, and warned the Thunderbolts to stop "playing hero".

(Thunderbolts#23)- With the Masters, observed Hawkeye's statement that the Thunderbolts would bring them down.

(Thunderbolts#24)- With the Masters, assaulted the National Guard in Robinette, Nebraska, to bring the Thunderbolts to them and active tremendous weather storm; returned to Mount Charteris base with other Masters of Evil, now numbered at 25 men and women.

(Thunderbolts#25)- Base infiltrated by the Thunderbolts, fought them; Man- Killer fled with Cyclone when she realized their defeat was imminent.

(Thunderbolts#27)- First appeared as bartender "Wilma" in Burton Canyon, Colorado. Found tending bar at "The Down Slope" by Thunderbolts member Atlas (in civilian clothes), who was unsure whether to inform his teammates of her activities.

(Thunderbolts#30)- Bar again visited by Atlas, who noticed her interest in skiing, another clue that she was Man-Killer.

(Thunderbolts#34)- Saw Atlas on television; suspected he had been visiting her bar.

(Thunderbolts#35)- Again visited by Atlas, who was mourning the apparent death of his teammate Jolt.

(Thunderbolts#40-41)- Bar visited by Techno and Scourge, both in disguise.

(Thunderbolts#42)- Bar trashed by Wonder Man, who had come to capture Atlas for Count Nefaria; pleaded to by Atlas to aid him against Wonder Man's assault, but declared that she hated all men, and abandoned him.

(Thunderbolts#64) Was present at Cardinal's jailbreak, along with the rest of the new Crimson Cowl's new Masters Of Evil.

(Thunderbolts#65) Man-Killer was one of the bodyguards at Justin Hammer's house when Hawkeye, Plantman, Songbird and Cyclone broke in. The Masters had no problem taking care of Hawkeye's group, and Man-Killer even KO'ed Plantman. Later, was talked into joining Hawkeye's group when he exposed that Hammer had planted a bomb inside all of his former agents.

(Behind the Scenes) Changed her name to Amazon and gained a new costume.

(Thunderbolts#67) After Hawkeye's team was captured by Silver Sable, Amazon spent some time getting to know Skein and Cyclone. Later, they raided Justin Hammer's estate, but were caught by surprise when Justine was revealed to be the new Crimson Cowl.

(Behind the Scenes) Amazon was captured, along with Cyclone, Songbird, and Blackheath (Plantman's new alias).

(Thunderbolts#69) After being freed by Songbird, Amazon discussed retreating, but Songbird didn't like the idea. After Justine Hammer's defeat, is confronted by SHIELD agents.

(Thunderbolts#71) Punching a hole through the wall, Amazon gave the others in the group an escape route, save Songbird, who stayed. While Hawkeye wandered through the woods on his way back, found her hanging from a tree, where Skein was trying to get her to consider going back to help Songbird. Using Harrier and Cyclone for bait, was able to surprise a SHIELD agent. Cyclone begged her to untie him, calling her Man-Killer in the process. She requested he call her Amazon from now on, and he made a comment about another going to the other side, which she replied to with "I was born on that side, Frenchie." Finding Skein and SHIELD agent Silicone in a compromising situation, she KO'ed the poor guy.

(Thunderbolts#73) Went on the mission to fix the White Hole in V-Battalion HQ in Symkaria, where she was stuck with the job of anchor.

(Thunderbolts#74) Was there to "greet" the original Thunderbolts, as they made their way back from Counter-Earth.

(Thunderbolts#75) On a beach outside of Dr. Faustus' old home where the Thunderbolts had made their temporary home, Amazon considered just swimming away. After a short conversation with Atlas, swam away, saying that she just didn't have the guts for it.

It is unknown how Man Killer survived her electrocution in MTU #107-- Techno remarked in Thunderbolts#3 that she was supposed to be dead. That issue by the way is the historic first meeting of Spider-Man and the She-Hulk. (And what a nice couple they make !!!)

OK, I've got to make the Austin Powers connection. While MK is a big meanie and not quite as funny as Austin, she's got that big "woman" symbol thingee, and her 1972 appearance has his lingo down pat.--Snood.

Not to be confused with:

Man-Killer, an android destroyed by Captain America, @Captain America I #111
Amazon of Strike Force One, a "clone" of the She-Hulk, @ Heroes For Hire #2
Amazon of Earth-Age of Apocalypse, Elizabeth Guthrie, counterpart to one of Cannonball's younger sisters, @ Factor X#1
Amazon of Earth-Bishop, one of the XSE, @ Uncanny X-Men Annual 1996
Amazon, an Amalgamation of Storm and Wonder Woman created by Dr. Strangefate, @ All Access#4
The Amazons, the race of women from Greek mythology led by Hippolyta, @ Thor I#127
The Amazons of the Hyborian Era, natives of the Black Coast led by Nzinga, @ Conan the Buccaneer, Savage Sword of Conan#41
Adrenazon, Adria Lynn, @ Marvel Comics Presents#123/2
Amazar, the dimension of the Amazites, @ Scarlet Witch#1
The Amazites, an extra-dimensional race, @ Scarlet Witch#1
Amazo-Maxi-Woman of Counter Earth-Franklin, a member of the Remnants, @ Heroes Reborn: Remnants#1
Wonder Woman, the actual Amalgam version of Amazon, the combined Storm and Wonder Woman, @ DC vs Marvel#3