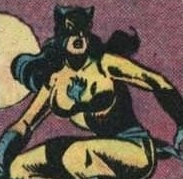 Greer Grant Nelson, better known as Tigra, began her superhero career as a costumed crimefighter called the Cat. Following the death of her husband, a policeman killed in the line of duty, Greer took a job as a lab assistant to Dr. Joanne Tumolo at the University of Chicago. Dr. Tumolo was developing a process by which women could be scientifically enhanced to meet their full mental and physical potential, and she determined that Greer would be the ideal test subject. Unfortunately, Dr. Tumolo had been forced to seek funding from outside sources, and her patron, the eccentric millionaire Mal Donalbain, had his own plans for her project. Donalbain insisted that his protégé, Shirlee Bryant, be the test subject and Dr. Tumolo had no choice but to agree. Since Bryant was inherently unsuitable and threatened the success of the project, Dr. Tumolo carried out the same experiments on Greer in secret. In due course, Greer found that her mental faculties and physical prowess had been enhanced to nearly superhuman levels.

Fearing that Donalbain's interference was ruining the project, Dr. Tumolo decided to confront him. Not finding him in his penthouse office, the scientist had a look around and discovered Donalbain's plans to use her process to create an army of superwomen with which to take over the country. Witnessing Bryant's death during a training exercise, Dr. Tumolo fled, taking as evidence one of the cat-themed costumes Donalbain had prepared for his minions. However, Donalbain learned that she had been spying on him and sent his thugs to eliminate her. They set a bomb that exploded just as Greer was arriving, and Dr. Tumolo was gravely injured. Before lapsing into a coma, she explained to Greer what she had found. Desiring revenge, Greer donned the cat costume and tracked Donalbain to his lair. There, she defeated his henchmen and pursued the megalomaniac until he committed suicide rather than surrender.

Greer was almost immediately drawn into action again when the critically-injured Dr. Tumolo was kidnapped by agents of the criminal mastermind known as the Owl. Although the Owl escaped capture, Greer managed to rescue her mentor, and her career as the crimefighting Cat was officially underway. As the Cat, Greer battled several offbeat menaces to the city of Chicago. During this time, the mayor of Chicago was assassinated and the Cat trailed the killer to New York City. Realizing she needed the help of a local hero, the Cat recruited Spider-Man, as she believed he would be sympathetic to her cause. Together they hunted down the Man-Killer, a female powerhouse who had assassinated the mayor for his opposition to the feminist movement, and defeated her.

Back in Chicago, Greer's life took a dramatic turn when she was mortally wounded in a battle with HYDRA agents. Dr. Tumolo revealed herself to be a member of the race of Cat People, and took the dying Greer to an enclave of her kind located in Mexico. There, through a mixture of science and sorcery, Greer was transformed into the Tigra, one of the Cat People's legendary warriors. The forces of HYDRA were defeated and Greer, happy to be alive, accepted her metamorphosis. However, integrating her cat-soul with her human side would prove to be a long and difficult process.

Eventually, Tigra came into conflict with Kraven the Hunter, and though she defeated him, he quickly escaped from police custody. She vowed to hunt him down, but became sidetracked by other adventures. Having met the Thing while tracking a renegade Cat Person, Tigra began a brief association with the Fantastic Four and their friends Thundra and the Impossible Man. She found she enjoyed being part of a team, and helped battle the Frightful Four, a Mr. Fantastic impostor, a giant robot, and a monster from the Negative Zone. Meanwhile, Kraven was captured by Spider-Man and sent to prison in Illinois. Some months later, however, Kraven escaped from jail again and captured both Tigra and Spider-Man, seeking revenge by forcing them to fight to the death. Spider-Man managed to destroy the electronic control collar on Tigra's neck, freeing her from Kraven?s thrall. The villain was then easily defeated and returned to prison.

Not long after, Greer was devastated when her friend and mentor, Dr. Tumolo, was murdered by a renegade from the High Evolutionary's New Men. Tabur, as he was called, sought a device Dr. Tumolo had developed to help Tigra regain her human form, and he used it as a weapon against the people of New Orleans. Tigra joined with other Cat People in opposing him, and in the end, Tabur was devolved into his original form as a housecat.

Sometime later, Tigra was compelled to go to Avengers Mansion, joining several other heroes being manipulated by the psychic powers of Moondragon, who sought to take over the illustrious team. After Moondragon was driven off, Tigra decided to petition for membership anyway. With the Beast?s sudden resignation leaving an opening, the Avengers accepted her as a provisional member. She moved into the mansion and became quite friendly with the butler, Edwin Jarvis. Tigra was present when founding member Henry Pym was court-martialed and kicked off the team. During this time, she also attended the funeral of Captain Mar-Vell, fought the Ghost Rider, and assisted the X-Men against some evil extraterrestrials. Following a terrifying battle with the overwhelmingly powerful Molecule Man, Tigra decided she wasnt really in the Avenger's league and resigned from the team.

Eventually, Tigra met up with Spider-Man, the Avengers, the Fantastic Four, and just about every superhero on earth when they were all teleported to a space station for the Grandmaster's "contest of champions" against Death. Soon after, she joined in the festivities when the Hulk was pardoned, and then teamed up with the Wasp, She-Hulk, and Storm against the forces of A.I.M. (Advanced Idea Mechanics). She decided to try earning some money as a model and spokesperson, and encountered Spider-Man again on the set of a TV commercial she had agreed to do for a fast-food chain. Spider-Man then helped her out when she was attacked by the revenge-seeking brother of Mal Donalbain.

Finding limited opportunities in New York, Tigra decided to move to California. Upon arrival in San Francisco, she fought with Spider-Woman over a mutant runaway whose powers were out of control. They were all subsequently kidnapped and imprisoned by the Locksmith, but worked together to escape. When Spider-Woman then inexplicably lapsed into a death-like state, and her "ghost" began appearing, Tigra contacted the Avengers for help. Together with Doctor Strange, the heroes battled the sorceress Morgan le Fey and saved Spider-Woman's life. Tigra then helped out at Spider-Woman's detective agency until being recruited into the new west-coast branch of the Avengers. Although reluctant at first, Tigra was convinced to stay with the team after they defeated Graviton in a major battle. Soon after, they joined a veritable army of superheroes to help the spaceknight Rom drive the alien Dire Wraiths from the earth once and for all.

With the West Coast Avengers, Tigra struggled to reconcile her feline and human dual nature, as they fought menaces ranging from Master Pandemonium to Doctor Doom. At one point, she even devolved into a nearly mindless cat-like creature and had to be put in a cage. Eventually, with the help of Agatha Harkness, Tigra struck a lasting balance and returned to active duty. She ultimately resigned from the Avengers when her quinjet crashed in the Australian outback and she decided to remain with the group of Aborigines who saved her life. In time, she returned to the United States and assisted the Avengers on occasion. Then, after spending an extended vacation in outer space, Tigra found a new career working with the NYPD.

During the superhero "Civil War," Tigra aligned herself with the pro-registration forces, but infiltrated the opposition as a spy. Her deception was uncovered, however, and she was used to feed disinformation to her allies. In the wake of the conflict, she continued to work in support of the Superhuman Registration Act.