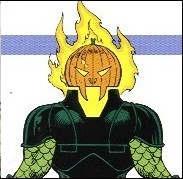 Levins had a profile in the OHotMU Master Edition, but this profile was done to differentiate him from the Mad Jack(s) seen more frequently over in Spider-Man, as featured in the Spider-Man Encyclopedia. This Jack O'Lantern has appeared both with a full pumpkin helmet (as seen at the bottom right, in Captain America I#396-398, Alpha Flight I#121, and Spider-Man Unlimited#12), and one with the bottom portion flattened (as shown at the bottom left, in Cap 405-410 and the Hood#2-4, 6). The best way to differentiate him from either of the Mad Jacks, who were his contemporaries, is by motive and speech. This Jack O'Lantern speaks with a "Brooklyn" type of accent, and lacks the sophistication of the Jacks. He also is always working for profit, where as the Jack's goals were just to mess with people's minds.

Very little is known about Steven Levins, the man that became the Jack O'Lantern after Jason Macendale became the Hobgoblin. He grew up in the farming community of Sleepy Hollow, Illinois and then went to New York to become a costumed criminal. Working with Blackwing, he scoped out the former Silvermane mansion which had since become Skull House. There they fought Captain America with little success until Jack nailed Cap with a hallucination gas grenade.

Figuring the delusional Cap was now an easy score, Jack and Blackwing attacked him again, though his battle instincts still enabled him to fight them off. Watching from his Rocky Mountain lodge via camera, the Skull was impressed with the viciousness with they attacked a downed foe, and sent Mother Night to recruit them to join his Skeleton Crew. After failing to overcome Cap, Jack and Blackwing took off before the gas grenade could wear off, but he tracked them down and beat them both into submission anyway. Mother Night created an illusion that she was the Scourge of the Underworld and had then executed the two criminals, but Cap through one of Jack's grenades at the fleeing Scourge. The hallucinogen gas disrupted her illusion, and Cap captured her.

While Cap was distracted with Mother Night's illusion, her partner, Cutthroat, took off with Jack and Blackwing.

Cap returned for the two criminals but they were nowhere to be found. With Cutthroat and Blackwing, Jack prepared to break Mother Night out of prison, but her illusion powers enabled her to escape on her own. She brought them all back to the Skull's Rocky Mountain headquarters.

Hearing the commotion, Jack came running to see that Crossbones had just killed Cutthroat, who had tried to kill Crossbones in his sleep. Jack was present as the Red Skull agreed to allow Crossbones back in to the Skeleton Crew if he agreed to sacrifice Diamondback. Rachel managed to take Blackwing's craft and fly away, but Jack was right on her tail, peppering her with bombs. It was Crossbones who recaptured her, though, by pretending to offer help and them stabbing her in the back, literally. Soon after, Jack and Crossbones saw Captain America and the Falcon swooping down at their base.

Jack fought the Falcon, leading him in pursuit and then suffocating him with a "ghost grabber." However, the Falcon suddenly deployed his wings, which went sailing into Jack's chest, knocking him off his hovercraft. He was apparently knocked out from the fall, and the Falcon's own wings returned to him. The Falcon covered Jack, bound him, and brought him back up to the mountain peak. Jack and the others were sent to the Vault

Captain America, the Falcon, and Diamondback infiltrated the AIM Weapons Expo, posing as Crossbones, Jack O'Lantern, and Mother Night, respectively, since they new these three were in the Vault and would not be in attendance. Jack O'Lantern was one of those present at Chess Set's auctioning of the Sphinx power-filled corpses of Silver and Auric. The auction was interrupted by Alpha Flight and Spider-Man, and the corpses merged into a single entity and left for space.

”Who Did Spider-Man Murder?”

Alongside the Beetle, Boomerang, Scorpia, the Shocker, Jack O'Lantern sought the clone saga skeleton from the smokestack, for which J. Jonah Jameson had offered $100, 000 for its recovery. This struggle brought him into conflict with the Ben Reilly Spider-Man, who defeated the whole group. (Spider-Man Unlimited (Vol. 1) #12)

Alongside the Constrictor and the Shocker, Jack was hired to guard the diamond shipment of Dennis "The Golem" Golembuski, and to act as back- up to Madame Rapier. Jack and the other two played poker until Rapier alerted them of the presence of an invisible thief. Jack exposed the Hood with a wide spray of concussion grenades, and they briefly caught him, but he got away and set off Jack's entire Bag O' Tricks. The three were blown into water by Pier 34 and swam back to shore, and the Hood escaped with $1.5 million dollars worth of diamonds.

Jack and the other two again acted as back-up to Madame Rapier, whom the Hood once again got the better of. Not appreciating her condescending treatment, the three allowed her to remain at his mercy, and he dressed her in a similar hood and cloak and sent in front of the cops, who killed her. The Hood then confronted Jack and the others, returning Golembuski's diamonds and calling a truce.

Jack O'Lantern appeared briefly during Civil War as agents of the Federal Government, employed to capture the traitorous (ie, un registered) Spider-Man. He cornered Spider-Man in a sewer, only to be killed by the Punisher. (Civil War #5)

”The Legend of Sleepy Hollow, Illinois”

After being returned to Sleepy Hollow for burial, the corpse of Steven Levins was reanimated by one of 666 pieces of Mephisto's soul, all of which had possessed the bodies of recently dead people. This brought him into conflict with Ghost Rider. Lucifer/Levins raised a zombie army to wreak havok across Sleepy Hollow ("AAARRRGHH! This is the worst army of the dead ever!" Lucifer complained as the zombies stumbled over tombstones) but they were held off by sheriff Harry O'Connor, while Ghost Rider dealt with Jack O'Lantern. The battle ended with Ghost Rider tearing out Levin's heart, setting it on fire and stuffing it back in his chest as he watched. Ouch. (Ghost Rider (Vol. 5) #5-#8)

“Dead No More: The Clone Conspiracy”

Years later, Levins was resurrected by cloning as part of the Jackal’s (Ben Reilly) revenge plan. Everyone that had ever died while Spider-Man was involved was returned to life to manipulate him into joining Reilly. Jackal claimed that all of the villains had been rehabilitated by Ashley Kafka and were no longer a threat. Reilly had also offered to clone Ben Parker but Peter knew he’d never do it. Uncle Ben would never approve of what he was doing. Jackal ordered the villains to kill him, which they were eager to do.