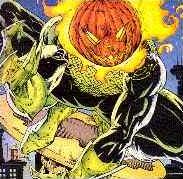 After Norman Osborn returned to torment Spider-Man, a new Jack O'Lantern showed up, who stalked J. Jonah Jameson. Jack also moved on Jonah's son, John Jameson, after John had been injured by an escaping Chameleon at Ravencroft Asylum. John shot at Jack, blowing his head off, until it re-grew. Jack scolded him and covered his head with hot candle wax, which contained mind control drugs. Eventually, Jack caught up with Jonah at the Bugle, beating him to a pulp in an elevator. Jonah was taken to a hospital after he was found by a security guard, but he wasn't safe even there. Spider-Man found Jack outside Jameson's hospital and tried to find out what he had to do with Jameson's beating. Jack escaped after his head floated over to Spidey and exploded. He couldn't chase after Jack O'Lantern because he was still suffering effects from Michael Morbius's bite.

Spidey returned to the hospital later and confronted "Mad Jack" once again. Jack was through with giving warnings. During the fight, Spidey punched through Jack's pumpkin head and was immediately burned, and began to hallucinate. He fell from Jack's flying platform and couldn't web himself to safety, as the vertigo from Morbius's bite took effect again. Ironically, he was saved by Jack, who reminded him that he had no fight with Spider-Man. However, the fight was just a distraction for Jack's helper to attack Jonah. Bursting into JJ's room, Spidey found John smothering his father. During a lunch meeting at a restaurant that day with Marla Jameson and Ashley Kafka, John had been given the signal to attack Jonah by Jack's cat, Maguire.

Jack and Maguire showed up later in Jonah's hospital room, after the guards outside had been hypnotized. Jack warned Jonah that John was the gun and Jack had his finger on the trigger. Jack removed his pumpkin helmet, reminding Jonah who he was. He also told Jameson that he was being hired to do this, even though he would have done it for free. The price for his families safety was the Daily Bugle. Jack vanished right before the guards stormed into the room. Meanwhile, John was seeking treatment for Jack's drug from Dr. Kafka. They explored John's mind and destroyed the mental command to kill his father. However, the destroyed "wall" in John's mind unleashed the Man-Wolf.

Around that time, Jack broke into the Jamesons penthouse apartment and stole Marla's favorite book of poems by Percy Bysshe Shelley. He delivered the book to Jonah, reminding him of the threat against his family. Jack then went to speak with his mysterious employer, who offered him his million dollar payment. Jack burned the cash, saying he didn't attack Jameson for money. This didn't seem to make any difference to his boss, Norman Osborn. Still, Jack did steal a ruby called the Hand of Mumthazi from the Metropolitan Museum.

The Hand was a bargaining tool for Jack, as leverage to gain access to the kidnapped daughter of Hazram Chaliz, the Sufindian ambassador to the United Nations. The daughter, Tabriaz, had been kidnapped by Mad Jack's rival, Conundrum. In return for Tabriaz, Conundrum wanted the Hand, which was said to have mystical powers. The duo began to fight, until they were interrupted by Spider-Man, dressed as Prodigy. The crooks seemed to grow to an enormous size, and Jack eventually devoured Prodigy whole. Realizing that he was facing illusions, Prodigy closed his eyes and trusted his spider sense, bursting out of Jack's chest. Prodigy began pummeling the two of them, forcing Jack and Maguire to escape in a plume of smoke. Jack returned shortly, after Conundrum was taken away by the police and Prodigy saved Tabriaz Chaliz. He threatened to use the Hand's mystical powers, until he was shot by one of Norman Osborn's bodyguards.

Afterward, Jack and Osborn met to discuss the happenings of the day. Osborn had wanted to be responsible for Tabriaz's rescue but Conundrum had forced him to improvise. He had wanted to make the ambassador owe him a debt that could never be repaid but was happy to be seen as a hero in the eyes of the public. Osborn praised Jack's "special effects" and "death scene" for being very convincing. Jack was also happy with the results, as his "death" allowed him to operate more freely.

Mad Jack's next appearance was in the Spider-Man: The Mysterio Manifesto mini-series, where Jack and a new Mysterio tormented Spidey, J.J.J., Daredevil and Joe Smith. It was revealed that Maguire Beck (Quentin Beck's cousin, and assistant to Mad Jack) had taken over as Jack O'Lantern, with Daniel Berkhart quitting as Mad Jack and resuming being Mysterio. Mad Jack (Maguire Beck) was captured, while Berkhart escaped with Maguire (the cat).

At some point, he apparently sold a spare Mysterio costume to the Kingpin, who in turn sold it to Francis Klum. Berkhart battled Klum for the right to be called Mysterio at Midtown High School, which is odd. If he didn't want another fishbowl around, he shouldn't have sold the costume. Ah, the difficulties that come with madness.