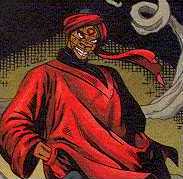 During Identity Crisis - Prodigy!, Peter took the guise of Prodigy. He saved the Ambassador of Sufind from terrorists, and fell under the eyes of Norman Osborn. When Conundrum kidnapped the Ambassador's daughter, asking for the mystical Hand of Mumthazi, a Sufindian national treasure in return, and in sequence, the third Jack O'Lantern steals the Hand from a museum, on the behalf on Norman Osborn, Prodigy goes to the Embassy of Sufind, to offer his services. There, the Ambassador's old friend, Norman Osborn is also promising his help. Osborn plans to manipulate Prodigy, and the Ambassador tells Prodigy where the exchange is to be made. The place is "Maguire's", an old abandoned Irish pub. There, we meet both Conundrum and Jack, who have a scuffle, even though they both have what the other wants. The talk between the 2 villains indicates that they shared the same mentor, that Jack is much older than Conundrum, that he has a romantic vein, that he taught Conundrum some of his tricks and that their mentor would be disappointed if he knew Mad Jack had become a mercenary. Prodigy arrives, and they both turn his attentions to him, growing to seem 30 feet tall.

Prodigy fights them both, and is being defeated, until he realizes they're just illusionists. Then, as he gains the upper hand (by using his Spider-Sense), Jack's cat buys enough time for Mad Jack escaping. Maguire (the cat) also flees, but Conundrum is captured. After he reveals the location of the girl, Prodigy turns him over to the police. He tries to run away again, but Peter KO's him with a powerful jab. That concludes his participation in the Spider-Books to date.

Two and-a-half years later, in the Spider-Man: The Mysterio Manifesto, Mad Jack was revealed to be Maguire Beck (female cousin to the original Mysterio, Quentin Beck) and Danny Berkart (Mysterio II) rotating in costume. It makes sense by the dialogue they had that the one using the pumpkin when Mad Jack met Conundrum was Berkhart. Berkhart, Maguire and the person inside Conundrum's costume were all Mysterio (Beck)'s students in the art of illusion. Berkhart became Mysterio once more when Quentin died. Maguire became Mad Jack solo. Conundrum supposedly remains in jail.