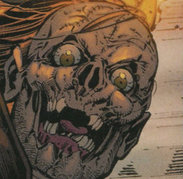 The sixth Jack O'Lantern's real name is unknown but he is definitely one of the meanest pieces of work to use the name. A natural sadist, he was kidnapped one Halloween and trained to become s professional assassin. To make sure that he had no remaining loyalty to his birth parents, the Crime Master sent him to kill them. It was while he was killing his mother that he decided to hollow out her head and use it like a jack o'lantern. This kind of mutilation became his trademark. (Venom #11)

Agent Venom had the displeasure of making a personal enemy of this new Jack O'Lantern while on a mission in Eastern Europe. While in the country of Nrosvekistan, Venom was looking for Dr Ekmecic, a specialist in vibranium weapons who was also being hunted by Jack O'Lantern. Jack was employed by the Crime Master and engaging in a little ethnic cleansing at the same time, gassing and poisoning the inhabitants of a local village. A battle broke out between Venom and Jack over Dr Ekmecic, which ended when Flash stuffed one of his enemies grenades into his helmet. The explosion caused Jack to flee on his flying broom stick, but permanently ruined his face. (Venom #2) After Crime Master learned that Flash Thompson and Agent Venom were one and the same, Jack O'Lantern volunteered to teach him a lesson. (Venom #9)

Jack showed up at Harrison Thompson's funeral, pretending to be a buddy of Flash's from the Iraq War. he claimed that Flash saved his life in Mosul and that Flash was also his sponsor at Alcoholics Anonymous. Jack claimed that he needed to talk with Flash and Betty Brant let them go. Jack O'Lantern took him to the Crime Master, who told him that Agent Venom worked for him now. If Flash wanted his mother, sister, and Betty to stay alive, he would be working with him for a long time. (Venom #10)

Thompson received the order to secure the Venom symbiote and was met by Jack, who told him they were going on a road trip. Jack talked the whole way, while Flash was silent. Jack helped himself to a drug he called "charisma" and went on about how charismatic people are scumbags, "it's why they develop the skill, to hide the scumbaggery." Flash turned on the radio to drown him out and heard a news report that miners were trapped under ground in a mine collapse and turned the car around to help in the rescue. Inside the mine, Venom arrived in time to hold up the roof and Jack helped the miners escape. One miner refused to leave his friend, who was pinned by a piece of metal. Jack shot the pinned man, giving the other man no reason to stay. When Venom confronted him on the murder, Jack said it was a mercy killing.

After they escaped from the mine, the two stopped at a local diner. It was here that he talked about his past and bragged about killing all of the previous Jack O'Lanterns. (He must have been referring to Mad Jack, Maguire Beck and Jack O'Lantern V, whom worked for Norman Osborn during Dark Reign. The first Jack O'Lantern (Jason Macendale) and second (Steven Levins) were long since dead. They were killed by Roderick Kingsley and the Punisher respectively.) After getting lunch at a diner, Jack "paid for" the meal by killing everyone in the building and carved their heads into jack o'lanterns while Flash was outside. (Venom #11)

While Agent Venom tore apart the security at a Las Vegas casino called The Devil's Den, Jack O'Lantern monitored his progress from outside. Venom made his was to the secret lab and found what was driving the symbiote into a rage filled frenzy, the Toxin symbiote. Venom was determined to kill its grandchild when Jack O'Lantern crashed in to save the alien spawn. Jack saved Toxin but quickly had an out of control Venom following him. Jack tried to threaten Venom by reminding him of Betty but Venom was relentless and Jack crashed his flying broomstick into a casino. Flash only got Venom under control when Jack said that even if Flash killed him, Crime Master would kill his mom. Jack O'Lantern then escaped with the Toxin symbiote and left Flash behind to get drunk. (Venom #12)

Soon, Flash decided to end the threat that the Crime Master and his thugs posed to his family. He was about to assassinate Crime Master, when he was attacked by Eddie Brock (post Anti-Venom) who was out to kill all of the symbiotes. Jack and the Savage Six (Death Adder, Human Fly, Megatak) attacked Thompson, who was forced to flee. Eddie had been webbed to a wall and was taken to Crime Master and forcibly bonded to Toxin. The Savage Six immediately went after Flash's loved ones, with Jack finding Betty in a coffee shop. Agent Venom arrived just in time and took her to safety. They went to check on Flash's sister, Jessie, and found that her husband had been killed by Jack. His head had been made into a jack o'lantern. Flash followed the smoke trail from the flying broom stick to a church where Jessie was being held. Jack mocked Agent Venom as he tossed Jessie off of a spire. If Spider-Man couldnt save some blond from a fall, how could Thompson? Jessie was saved but Jack escaped with Toxin, who took Betty.

While Flash dealt with Death Adder and the Human Fly, Jack was with the Crime Master, Megatak, Toxin and Betty. When Agent Venom finally arrived at the abandoned shipyard at Staten Island, Toxin defeated Megatak for Venom, leaving Thompson to pursue Betty. Venom quickly disposed of Jack, dumping him into a vat of chemicals as the killer screamed to the Crime Master for help. (Crime Master was later shot and killed by Betty.) Jack survived the fall and began killing innocents, leaving them with his trademark mutilations. This left a trail for Venom to follow, leading up to their confrontation on Father's Day. Thompson found his father's corpse at Jack's hideout, his skull carved to resemble a jack o'lantern. A bomb under a table exploded, disorienting Agent Venom as Jack O'Lantern attacked him with a sickle. Jack ranted about how the Crime Master had been his only real father as he carved up Thompson, until Flash shot him and took him to prison.

Jack was eventually removed from prison by Magneto, during World War Hate. The Red Skull was in possession of Charles Xavier's brain, making him an immensely powerful telepath called Red Onslaught. He was also in charge of two adamantium Sentinels created by Iron Man. The X-Men and Avengers had been defeated, and Magneto called up a villain army to battle the Nazi. Among them were Jack O'Lantern, Deadpool, Enchantress, Hobgoblin, Mystique, Carnage, Absorbing Man, Loki, Doctor Doom, and Sabretooth. As Carnage mentioned that he planned on killing all of them after the fight with the Sentinels was done, Jack dared him to try. After the Inversion spell was cast by Dr. Doom and Scarlet Witch, Jack and the other villains were mysteriously returned to where they came from. (Axis #3)