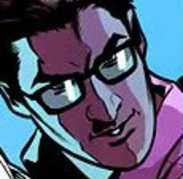 Francis Klum, younger brother of Garrison Klum (drug dealer to the rich and famous) had always been a victim. Timid, thin and taunted by classmates for being Jewish, he often depended on his brother for protection. Being Garrison's younger brother had a downside, in that he dominated Francis by humiliating him with molestation.

The parents of Garrison and Francis immigrated to America from Germany after the Second World War, during which they had been experimented on by the Nazis. The German scientists had implanted tissue from mutants into into camp prisoners to create supermen, but the program was ended by Hitler, who deemed giving his "undesirables" superpowers to be too dangerous. The test subjects were to be destroyed, but the Klums were saved by the liberating Allies.

The abilities were passed on to Francis and Garrison, who discovered his ability to make small amounts of liquid teleport when he accidentally sent a mouthful of mouthwash into the heart of his nagging mother, killing her. It seemed to be a disappointing super-power to have at first, until Garrison realized that people would pay big money to someone that could teleport heroin into their veins without needles. Movie stars could get their fix without the telltale marks that needles leave on the arms after repeated injections.

Francis had inherited teleportation abilities as well, but was also telekinetic, meaning that he could move things with his mind. Garrison forced Francis to make people accept his drugs and together they became rich. However, Garrison accidentally overdosed two of his clients, who happened to be connected to Spider-Man and the Black Cat.

Their investigation led them to Garrison Klum, but when they couldn't agree on how to go about capturing him, Cat went after him alone. Garrison was able to teleport a dose of heroin into her blood stream, incapacitating her. He attempted to rape her, but was killed by Francis, who wouldn't allow Garrison to treat anyone else the way he had been treated.

The Black Cat, found by the police to be under the influence of heroin and laying next to the dead body of Garrison Klum, was charged with murder. Spider- Man attempted to break her out of prison with the help of Daredevil, but they arrived just as Francis teleported into Felicia's cell. Francis used his telekinesis to force Spidey and Daredevil to fight each other, allowing him to teleport out of Ryker's Island. Francis took Felicia to the top of the Brooklyn Bridge, where he told her about how Garrison had abused him. Feeling pity for him, Felicia related the story of how she had been raped in college. For the first time, Francis believed that he had someone that understood him and whom he could trust.

Unfortunately, it was at that moment that Spidey and Daredevil arrived and Spider-Man, filled with fear that Francis was going to kill Felicia in the same spot where Gwen Stacy had been murdered, badly beat Francis. Feeling that the Black Cat had lied to him to stall for time, Francis teleported away, swearing revenge. He found his means to vengeance through the Kingpin, who sold him the tricks and costume of Mysterio, which he had obtained from Mad Jack.

Disfigured from his beating from Spider-Man, Francis believed that by masquerading as a foe that Spidey had beaten numerous times, he could make the vigilante lower his guard. Whereas Quentin Beck had only illusions and gadgets, Klum had real super-powers.

Francis got his chance to kill Spider-Man after Peter unmasked to the public as a part of the Superhuman Registration Act. Surrounding Midtown High School (where Peter works as a teacher) with a black smoke that caused anyone that breathed it to pass out, Francis rigged the school with traps and illusions. As Spider-Man tried to get the kids to safety, a Mysterio claiming to be Quentin Beck confronted Klum. This was an unsettling thing to see, as Beck had committed suicide well before Francis wore the costume. Quentin told Francis that his "new associates" were very interested in how Klum would fare against Spider-Man and the second man to call himself Mysterio, Daniel Berkhart. Berkhart had just arrived at the school to challenge Klum, whom he considered an impostor.

Daniel soon arrived and battled Francis. Berkhart seemed to get the upper hand but was defeated by Spider-Man, who had been enjoying seeing the bad guys beat each other up instead of him, for a change. Klum, realizing that Spider-Man had just defeated his enemy for him, tried to use his telekinesis to force Spider-Man to cut his own throat. Spidey was saved by coach Flash Thompson, who took the knife away from Spider-Man and threw it at Klum, stabbing his upper arm. Francis activated a bomb in the school's basement, allowing him to escape as Flash and Spidey went for the bomb. His current location and status are unknown as he teleported away after attempting to take the school nurse, Miss Arrow, hostage. Arrow was not as helpless as she seemed, as she stabbed Mysterio in the chest with a strange stinger which appeared from her wrist.

The next time that Francis appeared, he was working as a stooge for the original Mysterio, Quentin Beck. He and Dan Berkhart were on a trash barge with Beck after a heist involving Mr. Negative (Martin Li). Spider-Man captured Klum and Berkhart, but Beck escaped.