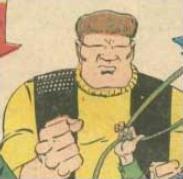 The Ox is one of the original members of the Enforcers. He is a mountain of a man with tremendous strength and resistance to injury. He first teams up with Montana and Fancy Dan when they work for the Big Man as point men in his bid to take over the New York gangs. But this bid runs him afoul of Spider-Man. By the time the battles are over, the Big Man is unmasked and the Enforcers are carted off to jail.

(A later retcon reveals the Enforcers as employees of Norman Osborn before they ever team up with the Big Man. They also work with the Headsman, an Osborn flunkey, post-Big Man, in yet another retcon.)

Once the Ox and his pals are released they join up with the Green Goblin who promises them revenge on Spider-Man. The Goblin concocts a plan which drags Spidey out to the New Mexico desert where he thinks he is making a film co-starring actors in the roles of the Enforcers. But the Enforcers are real and the battle is in earnest. The Ox gets his licks in but, in the end, he and his buddies are captured. The Goblin, however, escapes.

Next time out, the Enforcers team up with the Sandman to capture the Human Torch. As before, Spider-Man gets involved in the affair. He frees the Torch and the two heroes mop up the Ox and the other Enforcers.

For some reason, the Ox is paroled before his partners and he is subsequently recruited by Mr. Fear to join a new group. Along with the Eel, they become the Fellowship of Fear and start robbing banks by pretending to be a movie crew that is filming fake robberies. (Hey, when you're involved in a great idea like faking a film, it's hard to give it up, you know?) The group knocks heads with Daredevil and the Man Without Fear defeats them all, sending them to jail.

The Ox's cellmate in prison is Dr. Karl Stragg, a crooked scientist who promises to increase the Ox's intelligence once they get out. The Ox uses his great strength to loosen the cell's iron bars and the duo escapes. Once in the laboratory, Stragg betrays the Ox, as he planned all along. He conducts an experiment that switches their minds. The Ox gets stuck in Stragg's puny body while Stragg gets to revel in having the strength of the Ox. But in the ensuing melee with Daredevil, the body of the Ox seems to make Stragg more and more stupid while the Ox in Stragg's body finds himself slowly getting smarter. Ox II (Stragg) ends up charging at Daredevil and falling off a building to his death in the same sort of brainless stunt the original Ox would have performed.

Some time later, Dr. Karl Stragg (or the Ox in Stragg's body) is released from prison. (Even though he appeared to slip away uncaptured the last time we saw him.) He had volunteered to be a guinea pig "for tests of certain pharmaceutical isotopes" and these tests are now killing him. With less than a month to live, the authorities have decided to let him go. But instead of killing him, the isotopes mutate his body so that, guided by a mind that should be in a different body, he grows and takes on the appearance of the Ox. (He even gets the shirt, now orange, and the vest!) Again, he battles with Daredevil. As the fight goes on, the radiation mutation continues until he becomes both the Ox and Stragg warring for the same body. In the end, he reverts back to the body of Stragg, only to explode in a wash of radiation.

Which makes the Ox about as dead as you can get, right? Wrong. The Ox returns years later as an employee of the Kingpin. He is apparently back in his regular body and the only explanation given is that the Kingpin's men found the Ox "barely alive in that alley many months ago". (Thanks, Howard Mackie!) It isn't long before he's back with his old buddies, the Enforcers, only this time he's reduced to lugging a machine gun along. Spider-Man ends up defeating them. Oh well, it's better than being in another guy's body. Or being dead. I guess.