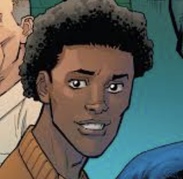 As typical of the Parker Luck, Peter got off on the wrong foot with Randy Robertson after Robbie Robertson told his son that Peter was the Big Man on Campus at Empire State University. Randy and his friend, Josh, were going to protest the conversion of a low rent student dorm into a private housing facility for visiting alumni. Peter felt pushed by Josh to take part in the protest and he over reacted to the pressure. Peter left, to calls from the crowd that he was a coward.

Keep in mind, this story was published in 1969. Here is the dialog between Randy and another African American student right before the protest.

Anyway, the students think that the only way to get their dorm back is to make the news, which they do, thanks to Robbie and J. Jonah Jameson at the Daily Bugle. The ex-dormitory is being used to house the Tablet of Time, which gives Josh the idea to steal it to use it as a bargaining chip to make the dean listen to them. Peter, who is working with the Tablet, says its a bad idea and Randy agrees. Wilson Fisk shows up to steal the Tablet for himself, thinking that the police will blame the students for the artifact's disappearance. He planned to gas the protesters to sleep and be gone by the time they woke up. He and Spider-Man fight it out and Randy tries to tackle Fisk, who bats him away. Spidey goes to check on Randy and Kingpin blasts the wall with his laser cane, sending rubble falling onto the students. Spidey manages to protect Robertson, who ends up in police custody with the other protest leaders. (Amazing Spider-Man #68)

The police question Randy in the interrogation room, with Jameson outside calling them anarchists. Captain George Stacy isnt so sure about that. The police want to know why, if the students were not working with Kingpin, they chose the same time to be at the exhibit hall. Randy resents the implication. Robbie is at his son's side, asking how he got involved in the protest. Randy blurts out "Don't you see? Cant you even understand? I have to be tougher--I have to be more militant--because of you! You've become part of the establishment--the white man's establishment! I've got to live that down!"

Eventually, the dean agrees to let the students have their dorm and grants the protesters amnesty, as they had nothing to do with the theft of the tablet. Afterward, Robbie has a talk with his son, telling him that maybe its not a bad thing to be militant in such a difficult world. Robbie warns him that without an education, he's an unarmed soldier. Randy asks about the other black men that have degrees and got nowhere. Robbie says that he cant promise anything. At that moment, JJJ barges in, enraged that Robbie allowed news articles that made Spider-Man look good. Robbie stood up to his boss, which impressed Randy. Randy is impressed that his father stood up to "a racist like him" and Robbie says that Jonah is no racist, just a blowhard. (Amazing Spider-Man #69)

Randy still held Peter is high regard, despite his refusal to take part in the protest. He defended Peter from another student when Peter walked past them without hearing them call to him.

Randy next showed up at Gwen Stacy's birthday party, but left before Peter arrived. This was a good thing, as he was suffering from the flu and delirious. The flu weakened his spider powers and made him confess to being Spider-Man in front of Harry Osborn, Captain Stacy, Gwen and Mary Jane Watson. When Peter came to his senses, he had Hobie Brown show up and pretend to be Spider-Man, which apparently fooled everyone. (Amazing Spider-Man #87)

”The Arms of Doctor Octopus!”

Randy started to cool on Peter, after he invited him to a protest about air pollution. He didn't give Peter time to come up with an excuse why he couldn't go (Peter wanted to go looking for Doctor Octopus) and said maybe everyone was right and Peter Parker only cared about Peter Parker. (Amazing Spider-Man #88)

Randy showed up several issues later to go to an off Broadway show featuring Mary Jane. He arrived shortly after Spider-Man rescued a stoned African American teen from falling off a roof top. He complains about how drugs have been hurting the black community and makes comments that don't go over very well with Norman Osborn. Norman says it isn't his problem or responsibility, which Randy takes offense to. They eventually settle down and enjoy the show, until Norman starts to recognize a closet in the theater and later becomes the Green Goblin. (Amazing Spider-Man #96)

After Spider-Man returns from the Savage Land (and battling Kraven the Hunter and the monstrous Gog), he see's Randy at another protest at the Bugle. The protesters want the Bugle to focus more on minority rights and helping the common man and less time covering "the adventures of Ka-Zar and some costumed weirdo." Jameson shows up shortly and gets into an argument with one of the protesters and shoves him into the wall. The crowd turns on Jonah and only Randy tries to calm them down but to no use. Spidey pulls JJJ from the crowd and webs him to a fire escape above the crowd, much to their amusement. Potential bad blood between Randy and Jonah was averted when Jameson led a protest of his own against police cameras posted around the city, on the grounds they violated privacy. They even marched side by side. (Amazing Spider-Man #105)

Randy was often around as Peter's friend and not just as a protester. He and the gang tried to comfort him after Gwen was murdered, he and Glory Grant showed up at the Christmas party where Harry and Liz Allan announced their engagement and donated unwanted items to furnish his new apartment. He also showed up at Aunt May's funeral.

Randy followed his father's advice about education and graduated from Empire State University. He then went on to graduate studies in social work at Pittsburgh State University, where he met his future wife, a white Jewish woman named Mandy Batavides. The marriage didn't last long after they moved to California and Randy came back to New York. Back in New York City, Randy vigorously defended his father after he was sent to prison for a crime that was committed by the gangster Tombstone.

While traveling by train to Pennsylvania to see Robbie, they were attacked by the Grizzly. He had been defeated by Spider-Man and demanded a rematch but was laughed at by Peter after finally remembering him. Grizzly tossed Peter from the train and went after his traveling partners: Randy, Cynthia Bernhammer, Joy Mercado and Martha Robertson. Spider-Man defeated him by letting him think his back was broken. All Grizzly wanted was to prove that he could defeat Spider-Man. (Web of Spider-Man (vol. 1) #58)

Randy and Peter became room mates after Peter lost his apartment (which was paid for by Mary Jane's modeling and was far out of Peter's pay grade) after MJ was thought to be killed in a plane crash. Randy started dating Glory Grant and Peter had a flirtation with Jill Stacy, cousin of Gwen.

As Peter's room mate, Randy became a target of the Green Goblin. Osborn had drugged Peter's toothpaste with a mind altering drug, forcing him to act as the Goblin. While under the influence of the drug, Peter (dressed as the Goblin) attacked Randy and Glory while they were on a date. Only Peter's inexperience with the glider saved the couple from serious injury. They soon after ended their relationship. (Amazing Spider-Man (vol. 2) #25)

”Revenge of the Spider Slayer”

Randy had less luck avoiding danger when he became a rival with Phil Urich for the affections of Norah Winters. Urich was also the Hobgoblin and saw an opportunity to take out his competition during an attack on the Bugle from Alistaire Smythe's spider slayers. He knocked out a support beam which toppled onto Randy, badly hurting him. He recovered and quickly went back to being Norah's boyfriend and camera man. (Amazing Spider-Man #654)

That didnt last for long, after the Jackal and the Queen introduced spiders into Manhattan, which gave spider powers to anyone they bit. Randy was one of the bitten, which proved useful when Hobgoblin came to kill him once and for all. Norah didn't try and help Randy during the fight (a satchel of pumpkin bombs lay at her feet, which she hadn't noticed) as she was too busy getting pictures of the fight. Randy finally fought off the Hobgoblin and broke up with Norah for being too focused on getting the story to save him. He later showed up at the Bugle, where he progressed to stage two of the mutation: changing into a man spider. He, along with the rest of New York, was cured by the efforts of the scientists at Horizon Labs, Spider-Man, Mister Fantastic and Anti-Venom.

Randy took up a job rebuilding the F.E.A.S.T. Center, a homeless shelter started by Martin Li. The shelter was being helped by Peter, May Parker, and Fred Myer (Boomerang). Randy left the three of them alone at the shelter, as he was on his way to see “To Kill a Mockingbird” with his new girlfriend, whom none of them had met. After he was gone, F.E.A.S.T. was attacked by the Syndicate (White Rabbit, Scorpia, Beetle, Carolyn Trainer, and the new Electro.) (Amazing Spider-Man (vol. 4) #26)

Spider-Man and May escaped but Boomerang was kidnapped by the Syndicate. Spidey had left a spider tracer on Boomerang weeks prior and went back to their apartment to get a long range receiver, and found Randy with his mystery girlfriend: the Beetle. (Amazing Spider-Man (vol. 4) #27)

Inside the apartment, Randy was annoyed that she had stood him up at “To Kill a Mockingbird.” She apologized and said it was work. He had tried to text her but his phone seemed to not work. She told him that he had been skeptical of dating a criminal, to which she replied she was a lawyer. She also reminded him that he had agreed to date her if she didn’t harm innocent bystanders. His phone received a text telling him that the shelter had been attacked. She replied that his phone was supposed to be jammed for a few more minutes but confessed that she had blown up his job and kidnapped his roommate. He called her a psychopath and she replied that he was always complaining about him anyway. (Randy corrected her, saying it was Peter he complained about.) He demanded that she let Fred go, and she reminded him that he had tried to kill her when she was part of his gang. He told her Fred had changed and she said it was just business. He told her she knew how important F.E.A.S.T. was to him and she destroyed it anyway. He said the super villain apple doesn’t fall far from the tree and she told him to watch his mouth. She had a repulser ray but wouldn’t use it because she was a nice person.

At the shelter, Randy was trying to get things stabilized when he was met by a group hired by a “Mr. Stone.” May told him that they had arrived suddenly and promised to repair the place and rebuild it. She told him that a high powered lawyer had threatened to sue the city on their behalf. The lawyer’s name was Janice Lincoln and wanted to meet with them for brunch. She asked if he was available and after seeing Beetle looked down at them from a rooftop, he agreed. (Amazing Spider-Man (vol. 4) #28)

Randy visited his father at work and Robbie asked his son how he had been so busy that they had to schedule a lunch. Randy hadn’t told him he was dating the Beetle, daughter of Tombstone. (Amazing Spider-Man (vol. 4) #61)