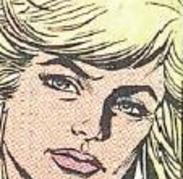 Originally portrayed as a short-haired brunette working for the Daily Times, Joy found herself in trouble after writing a defamatory article about a street thug named Druid Walsh. In anger, Walsh kidnapped Mercado and set up a fake "date" with the reporter at a fancy restaurant that was rigged with a bomb. Mercado was eventually saved by Moon Knight who scolded Joy for her malicious article.

Joy eventually got a new leash on life when she was hired as a reporter for the Daily Bugle. Now sporting long, flowing blonde hair, Joy seemed more vibrant and confident in her new job. It didn't take long for Joy to become a rather permanent fixture in Peter Parker's bachelor life. One of the first shared assignments that Pete and Joy teamed-up on was an article about a club in Greenwich Village. During the show, someone in the crowd attempted to shoot the Beyonder (who was watching his mentor perform). In the panic, Pete was able to change into Spider-Man so that he could investigate the incident and Joy stayed behind to take pictures.

Joy and Peter's working relationship soon took an unexpected turn as the two shared a kiss underneath the mistletoe at the Daily Bugle. This romantic side of the pair's relationship never quite materialized though. Soon after, the two were back to business as they teamed up to cover stories for J. Jonah Jameson’s “Now Magazine.” Their first trip was to a town in Virginia where a factory had recently closed. Not long after arriving in the small town, a mob attacked and captured both Pete and Joy - taking them into an underground facility. Peter was then forced to change into Spider-Man, even though he feared that Joy would almost certainly figure out his secret identity, in order to fight the villain known as Magma. After rescuing Joy and a lady named Charla Hanks, Pete went back into the labyrinth to finish off Magma. During their battle, the entire facility was destroyed and a distraught Joy traveled back to New York alone, fearing Peter had been killed. Once Peter finally made his way back to NYC, Joy was relieved but it remained unclear whether she had truly deduced Parker's secret or not.

Next, the exciting duo of Joy and Pete embarked on a trip across the pond to report on a speech being given by Margaret Thatcher. As Joy and Pete reached the airport in London, a group of Irish terrorists set off a bomb and engaged in a gunfight with authorities. Peter discreetly aided the cops in apprehending the terrorists, but the IRA struck again the next day at Thatcher's speech. After a costumed Spider-Man rounded up the terrorists, Joy and Pete decided to head into Dublin to further explore the connection between the Irish terrorists and the Roxxon Corporation. Once in Northern Ireland, the pair were eventually captured and it was revealed that Roxxon had put together a group of terrorists to cause additional unrest in the country. Roxxon hoped that the increased violence caused by the "black hoods" would allow the company to ramp up their weapon exports to the British government. Eventually Pete and Joy escaped and made it back to New York. Jameson was initially furious that the two took it upon themselves to travel to Ireland, but he quickly calmed down after hearing about the Roxxon story that they had uncovered.

Over time, Joy and Peter would receive fewer and fewer assignments together. Eventually she would fade out of Peter's life altogether. It is still a mystery as to whether or not Joy actually figured out Pete's identity during their adventures together. At one point she berated Peter for appearing to have a secret deal with Spider-Man; soon after though, she complimented Pete on the pictures he took of Spider-Man and Doc Ock. She was also quick to defend Spider-Man after overhearing some vilifying remarks made at the web-slinger by Nick Katzenberg After having seen Spider-Man in action in so many different instances while she was with Pete on assignment, it's hard to believe that a bright reporter like Joy Mercado wouldn't have figured out Peter's secret.