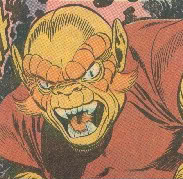 As usual, J. Jonah Jameson is worried about the state the Bugle is in. Circulation is down and costs are up, leaving the newspaper in a bad financial position. Jameson blames TV for the troubles, but its also the saving grace. He hears from a TV report that a survivor from an expedition to the jungle of Savage Land claimed that his group of explorers were attacked by a giant creature. He plans to go to the Savage Land and find the monster.

He forces Robbie Robertson to call Peter Parker and tell him that he's going to take pictures for the story. Peter jumps on the chance for the cash bonus, but his girlfriend, Gwen Stacy, isn't happy to hear that he will be gone. Gwen goes with him to the Bugle and Jonah instantly wants her to join the group. "Gotta think of the women's angle. They buy newspapers too, y'know. Besides, a pretty face never scared gents away from the newsstand."

Gwen is all for the idea, and soon the three of them are meeting with the survivor of the last expedition in Antarctica. As they stop to take pictures in front of an idol in the Savage Land, they are surrounded by a group of natives. Just as they are about to attack, the natives run away, terrified of the giant creature towering above the trees. Gog grabs Gwen and runs into the jungle. Peter jumps after them, but is swatted aside and falls over a cliff and into a river. Jameson, sure that Peter is dead, swears to go after Gog as an avenger.

Naturally, Peter is fine, if a little bruised and wet. He changes into his Spidey outfit and goes after Gog, despite the secret ID. Meanwhile, Gog has met up with his master, Kraven the Hunter. Upon Gwen's questioning why Gog brought her to him, but none of the others were taken, Kraven explains that he plans to have a kingdom carved out of the Savage Land. What good is a kingdom without a queen?

Jameson is still following Gog's tracks when he stumbles upon Ka-Zar and his saber toothed tiger, Zabu. Ka-Zar isn't happy to see JJ, and makes it clear that he wants him to leave the Savage Land after Ka-Zar finds Gwen. Spider-Man isn't having as much luck as Jonah. Using a tree sapling to catapult over a lake, he lands in quicksand. He tries to pull himself out by webbing a tree branch, but it cracks and falls on top of him, jamming his web shooter. (Amazing Spider-Man #103)

Just as he is about to sink to the bottom, he is saved by Ka-Zar. The king of the Savage Land tries ot talk him out of following him to Gog, but Spider-Man wants Gwen back more than life itself. Meanwhile, Kraven is explaining to Gwen how he came to be in the Savage Land. Having battled Ka-Zar once before for control of the Savage Land and lost, Kraven came back for a rematch. However, before he found his enemy, he found what appeared to be a space ship that had crashed into a swamp.

Upon searching the ship, Kraven discovered a small animal, half ape and half lizard. Another such animal was in a similar plastic cage, but was dead. Feeling the ship sinking further into the swamp, Kraven and the small creature escaped into the jungle. The creature grew quickly, doubling in size in a day. It was intelligent and eager to please its new "father." Kraven used that affection to make Gog, named after a Biblical giant, to conquer the native tribes. "Each man must find his niche, girl! The place where he can stake his claim to fortune--to power!"

While Kraven ranted, Spider-Man and Ka-Zar were planning their strategy. Spider- Man distracted Gog and led him away, while Ka-Zar tackled Kraven. The Hunter turned the tables on the jungle man and was about to smash his head with a boulder, when Zabu came to his master's rescue. Ka-Zar continued punishing Kraven, and ever made him agree to surrender, until he managed to get a noose around his enemies neck. A wild kick from Ka-Zar seemingly ended the Hunter's life, sending him falling over a cliff.

Gog was still smashing his way through the jungle, but stopped to fight a Tyrannosaurus that wanted to kill Spidey as much as he did. It was a quick fight before the dinosaur's neck was broken and the chase continued. Much as he didn't want to, Spidey led Gog to the same stretch of quicksand that nearly killed him. As the creature struggled in the sand, Spidey thought, "I heard enough, earlier, to know Gog came from another world...maybe the last of his race, sent into space to escape a dying planet. If not for the greed of Kraven..."

Ka-Zar returned Gwen to Jameson. Just as he was about to break the news to Gwen that Peter was dead, he climbed over the side of the cliff that he had been knocked over. "Didn't get any photos, I see," Jameson snorts. "And lost your camera. Alright you two--break it up! You're necking on my time!" (Amazing Spider-Man #104)

Gog seemed to be dead, but he was far stronger than anyone expected. He survived the quicksand until the Plunderer rescued him. Far from being a stupid animal, Gog managed to create a device that allowed him to communicate with Plunderer. He was brought to New York and stayed subservient to Plunderer, despite being far more intelligent. Ka-Zar followed Gog to New York, and tried to prevent him from helping Plunderer from attaining the super soldier serum. Plunderer lost control of Gog, who used his teleportation bracelets to head to another dimension. (Astonishing Tales #17 & 18)

"The Revenge of the Sinister Six"

Gog was next seen after Doctor Octopus and the Sinister Six traveled to another dimension and stole several high tech alien weapons. Gog was then used by Ock as the Sixth member to fight off the attacking heroes. After being rendered unconscious by Solo, who used some kind of energy gun on the monster, he was shrunk to a manageable size and sent "home" by Mister Fantastic. (Spider-Man # 21, 22, 23)

Many years later, Spider-Man and Boomerang (Spidey's new sidekick) were searching for the Lifeline Tablet in the sewer, to keep it safe from mayor Wilson Fisk. They were overtaken by a swarm of Vermin clones, when the creatures scattered due to a rumbling in the ground. It was then that a once again enormous Gog emerged from beneath them. (Amazing Spider-Man #842)

Meanwhile, Gog thought back on his life. He was born on a distant planet and given as a gift to the young son of a king whose planet had ended a long war. The gift giver explained, "They are called Tsilin. In some dimensions they can grow very large and are used as soldiers, but here, in this realm, they remain quite small--not to mention friendly, intelligent, and loyal. In other words, they make wonderful pets." The Tsilin immediately bonded to the young boy and they became very close. However, war soon returned to that planet and the royal family quickly evacuated the planet. There was no more room on the evacuation craft for Gog but he was placed in the cargo ship that followed his family. The cargo ship was attacked in space and thrown off course, eventually landing on Earth. It was there that he met Kraven, the Sinister Six and Mister Fantastic. After he returned home, he found that his home planet was still rocked by war. Luckily, he immediately found his long lost master, who was engaged in battle. The brief distraction caused the boy to be killed in an explosion. Gog lay silently next to his dead master, ignoring the bloodshed around him. Eventually, the queen found her dead son and was surprised to see his long lost pet by his side.

She surmised that the Tsilin had returned to take her son to a better place. She then revealed to be in possession of the Lifeline Tablet, which she claimed she had wanted to use to make things better on her planet, but all it had brought was death. (The tablet had fallen from the sky one day on her home planet, after being transported there by Doctor Strange. Strange had wanted to keep it out of danger after it was used by Hammerhead.) She threw it against some rubble, smashing it to pieces. She told Gog to return to the planet it came from and scatter the pieces, but to guard one to keep it out of the wrong hands. (Amazing Spider-Man #843)

After Boomerang grabbed the piece of the tablet guarded by Gog, he fled to the surface and the alien followed him. Mayor Fisk was waiting for them, with his elite soldiers. Gog was soon hit by machine guns and tank fire. Spidey webbed and collided the tanks and helicopters, saving Gog. He punched Spidey as thanks. Boomerang tried one of his trick boomerangs and the creature chased it, like a dog chasing a stick. Spidey had Boomerang use a sleep-boomerang on the giant. He reasoned that the Pym Particles that had been used to shrink him years ago was still in his system and could make him small again, if he had a reason. After the sleep boomerang was thrown into a semi, Gog shrank to fit inside. The now tiny and sleeping creature was adopted by Peter, Randy Robertson, and Fred Myer. It was that or leave it with Fisk's troops. (Amazing Spider-Man #844)