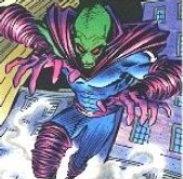 The Sleepwalkers are a race of alien beings that patrol the dimension known as the Mindscape, which borders every mind in existence. Their mission is to prevent evil forces from invading the vulnerable minds of beings to feed on their mental energies. Sleepwalker had encountered the worst evil of all, the villainous Cobweb, trying to access the mind of college student Rick Sheridan. It turned out to be a trap as Cobweb had taken an exceptional disliking to this particular Sleepwalker. Although his attack was "repelled", Sleepwalker was drawn in too close to Rick's mind and became trapped within.

However, it was soon discovered that Sleepwalker could emerge from Rick's mind into our world whenever Rick fell asleep. This world strange and new, Sleepwalker observed until he recognized what humans might consider evil in the form of crime and stepped in to foil a robbery. When a police sketch surfaced on the news of Sleepwalker, Rick recognized it from his dreams and vowed never to sleep again lest the creature be released back on the world.

After a constant struggle for Sleepwalker to regain freedom from Rick's mind and Rick refusing to sleep to let him, Sleepwalker had confronted Rick and used his dreams to explain to him his purpose and story. Despite some uneasy feelings, Rick came to an understanding with Sleepwalker and allowed Sleepwalker the freedom of the night. Although, there have been times when the two have come at odds with each other over some misunderstandings.

Despite always desiring to find a way home to his beloved Mindscape and his people, Sleepwalker takes the time to further study the human world and to right any wrongs he may come across.