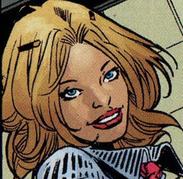 Switching her journalistic focus from community events to hardline investigative reporting, the cute yet ever-sarcastic Norah Winters has had numerous run-ins with both Peter Parker and Spider-Man.

When Peter Parker attempted to dodge a Front Line photo assignment involving the Hollister mayoral campaign, he settled for covering a community outreach fair in the Bronx. The only drawback to that assignment was that he was partnered up with Front Line reporter Norah Winters, who consistently gives Parker a hard time about...everything. The duo eventually get drawn in to a gangland turf-war as Mr. Negative employs the newly upgraded Hammerhead to consolidate the local gangs. As Spider-Man, Peter defeated Hammerhead and the villain was taken into police custody. Norah was then able to score a front page story reporting on Spider-Man and the gang war.

While Peter was in the Macroverse with the Fantastic Four, Norah thought he was avoiding her. When she bumped into Robbie Robertson at the Front Line, he introduced her to his son Randy. The two became an item shortly after.

In the midst of Norman Osborn's Dark Reign, Peter decided that it was time to make a stand against his greatest foe. Peter shared his viewpoint with the Front Line staff, but editor Ben Urich reminded Peter that there was no solid proof for Norman's transgressions. Norah, inspired by Peter's determination, decided to go undercover to investigate Osborn and find concrete proof that could bring him down. She took a job as an entry-level page at the Avenger's Tower and used her flirtatious skill set to make 'friends' with the security and janitorial staff. Eventually Norah landed a security card from one of the employees and she uncovered numerous 'projects' that Norman wanted hidden. As Norah prepared her story for publication, she received a video email from Osborn showing the torture of the security guard whose badge she swiped. The video was followed by the warning, "I never forget the people who mess in my affairs". Needless to say, Norah dropped the story.

Soon after, Norah covered a swimsuit model fashion show for the Front Line, a fashion show that recently elected mayor of NYC J. Jonah Jameson helped organize. At the fashion show Norah witnessed J. Jonah's father, J. Jonah Jameson Sr., confront his son in regards to his 'sabotaging' of JJJ Sr.'s wedding to May Parker. When JJJ Sr. mysteriously disappears shortly after, Norah teamed up with Carlie Cooper to investigate. Unfortunately this led to both Norah and Carlie being kidnapped by Doc Ock, however Spider-Man and the Human Torch were able to rescue the two ladies.

Back at the Front Line offices, Norah eavesdropped on a conversation between Peter and Urich in which Urich offered the photographer a full-time position with the paper. Peter was undecided about the offer, but Norah jumped in and announced the news to the entire staff. She then requested Peter's services in a 'story' she had uncovered at a local casino involving illegal government grafting. While at the casino the two find the Rhino, who was working legitimately as a security guard there under his given name Aleksei Sytsevich. Coincidentally, Aleksei was confronted by a new Rhino who wanted to challenge the former villain in order to take the mantle of the Rhino. Norah was able to escape the casino unscathed thanks to both Aleksei and Spider-Man. But the new Rhino was persistent and during a U.S. naturalization ceremony that Norah was covering, the villain arrived to wreak havoc amongst the innocent bystanders in order to draw out Aleksei. Norah found herself in the middle (quite literally!) of a Rhino versus Rhino battle that ultimately led to the death of Aleksei's wife and the new Rhino. Norah was once again saved by Spider-Man.

When the 'hero' the American Son arrived on the scene fighting crime, Norah found herself wondering if Harry Osborn had once again taken up the mantle previously given to him by his father. But Harry was removed from suspicion after he was shot by an unknown assailant and immediately rescued by the American Son. Norah, disguised as a nurse, snuck into the hospital where Harry was being treated. After a brief conversation, Harry decided to take Norah with him to visit his father at the Raft, a maximum security prison. Harry confronted his father in regards to Gabriel Stacy and he used Norah to share his story with rest of the world (that is, Norah publishes the truth about the American Son in the Front Line). After Spider-Man and Harry defeat Gabriel, Norah confronted Harry about his painkiller addiction. Harry tells Norah that he is 'getting his life in order'.

Norah was certainly popular with the men. She dated Peter, was clueless to the stalker-like Phil Urich and was dating Randy Robertson. Urich proved to be a problem, as the young man lived a double life as the Hobgoblin. She was unaware of this fact when she was dumped by Randy (who was upset that she put her career ahead of helping him against the Hobgoblin) and started dating Phil. (Deadly Foes of Spider-Man) The relationship turned against her after Roderick Kingsley returned to New York. Kingsley and Urich fought over who would be the Hobgoblin, with Roderick threatening to kill Norah. Kingsley later made good on the threat, sending a bat-drone to kill her, but she was saved by Max Modell. (Amazing Spider-Man #697)

She didn't stay safe for long, as she was kidnapped by (Spider-Man(Octavius)) (who was really Doctor Octopus, mind swiped into Spidey's body) and held at Avengers Tower. (She was held with JJJ, May Parker, Jonah Senior, Glory Grant, Robbie Robertson, the staff of Horizon Labs and Mary Jane.) They were attacked by the Scorpion and Hydro-Man but were rescued by the Horizon scientists and Spider-Man (Octavius). (Amazing Spider-Man #700)